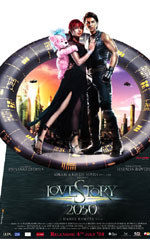 Ratings: **
A star has most certainly been born. There are no two ways about it. After watching Harman Baweja sing, dance, emote and entertain in this Adlab presentation for a full three hours, one wonders if there is anything that this Baweja boy from Bollywood can`t do.

Yes, maybe there is something Harman can`t do. He can`t make us forget for even a minute that he knows every component of the camera although he has never acted before. The confidence level stops just short of being cocky and overdone. He is never short of a positive and productive attitude.

It is clear that producer-director Harry Baweja has made Love Story 2050 as a showcase for his son`s aptitudes. To that extent, the film works wonderfully, creating repeated opportunities for the debutant to shine.

The script - sprawling across two time phases and three hours of playing time - is a simple love story of two very good looking people coming together in the svelte, sweltering, simmering climes of Sydney, moving apart and then going into a futuristic mode without alienating themselves from the romantic genre that this uniquely-designed film inhabits.

Harry Baweja happily avoids the pitfalls of pedestrianism even when the boy-meets-girl plot gets into a trite and repeatedly-tested mode.

The protagonists share a precious, fragile and tender chemistry. A butterfly perches itself on the girl`s trembling hands and manoeuvres her heart into places where there`re no tell-tale signs. The butterfly becomes a likeable leitmotif in the plot. The courtship and romance is done in shades and words that leave us smiling. The initial scenes are actually far more interesting than they appear.

The boy tells the girl to do something that she has never done before. How about shop-lifting? He suggests. She suggests he recite some poetry for her. Javed Akhtar does the rest.

By the time Harman and Priyanka sing their first two duets (Anu Malik at his soft and tender best) we`re convinced that they care deeply for each other. It`s in their eyes. No kisses and cuddles needed. Only cuddly robots. For the first time in a Hindi film, two robots serving as the protagonists` companions are given prominent places in the plot. And they aren`t just props. They are entities with a mind and personality of their own.

The entire courtship game stretching into two time zones is played out with an endearing innocence, and a focus and finesse that re-define the boy-girl formula in a language that`s sassy and trendy without ever lumbering into the lurid.

Towards the second half, when Harman flies into a futuristic Mumbai to retrieve lost love, the flying cars, the humane robots and the psychedelic dance numbers tend to overpower the basic romantic structure of the plot.

Harry Baweja could have avoided the extravagant excesses in the sky. How long can you watch flying cars and talking robots? After a while you restlessly begin to search for that romantic core which, blessedly, is never too far away from the narrative`s range of interests.

The second half, when a zany scientist (Boman Irani in a weird wig and silly smirk) transports the lovers and the audience into the future, has been done with an élan and flamboyance that leave us enthralled.

Vijay Arora`s camera work is extraordinarily rich in colours and style. The same goes for Priyanka`s sartorial grace. Her two roles are brilliantly defined by the clothes. Fortunately, Priyanka goes deeper in search of her characters` core. The repressed poetic persona in the first half and the brassy red-haired rock star in the second-half are two different entities.

But make no mistake. Love Story 2050 belongs to debutant Harman from first frame to the last. And all his co-stars know it. They all sort of move back to let the Baweja boy take centrestage.

Harman demonstrates an endearing all-purpose showmanship. He dances like a dream and gets gooey-eyed and sentimental in love scenes as though Romeo had just fallen off the balcony while serenading Juliet, bruising more than just his heart. This newcomer is to the camera born.

Wisely, the narrative restricts itself to the `love` part of the love story, creating pockets of asexual passion (not even a peck between the actors) without making cuteness a fetish and a fad.

A whole lot of visible and intangible effort has gone into building this colour-consumed atmospheric world of sights sounds and melodies that represent the harmony of the spheres in optical splendour.

Finally though, the effort doesn`t overpower the heart content and intent of the plot. This is actually a far better film than its genre and lavish budget would suggest.

Avoiding the vulgarity of overstatement but focusing on Harman and Priyanka to the point of making other characters appear largely redundant, Love Story 2050 offers a world where dreams and fantasies have a properly-designated place. We aren`t in it just for the pleasure-ride

It is a story about Karan (Harman Baweja), a young, spirited, sporty boy who lives life off the rules and Sana (Priyanka Chopra), a young petite, shy girl who lives life by the rules. This develops into a magical love story.

We land in Mumbai 2050 in the time machine... along with Uncle Yatinder, Rahul and Thea (Sana`s younger brother and sister). Flying cars, 200 storey buildings, robots and sky rails have changed the very face of Mumbai.

Through a series of twists and turns, the time traveler Karan finds himself separating from his love. QT, a friendly femme robot and Boo, a small robotic teddy bear play their distinct roles in bringing their love story together but soon find themselves under the threat of the demi-god of the future, Dr. Hoshi.

Will Karan be able to overcome the threat of Dr. Hoshi and win his love and travel back in time? 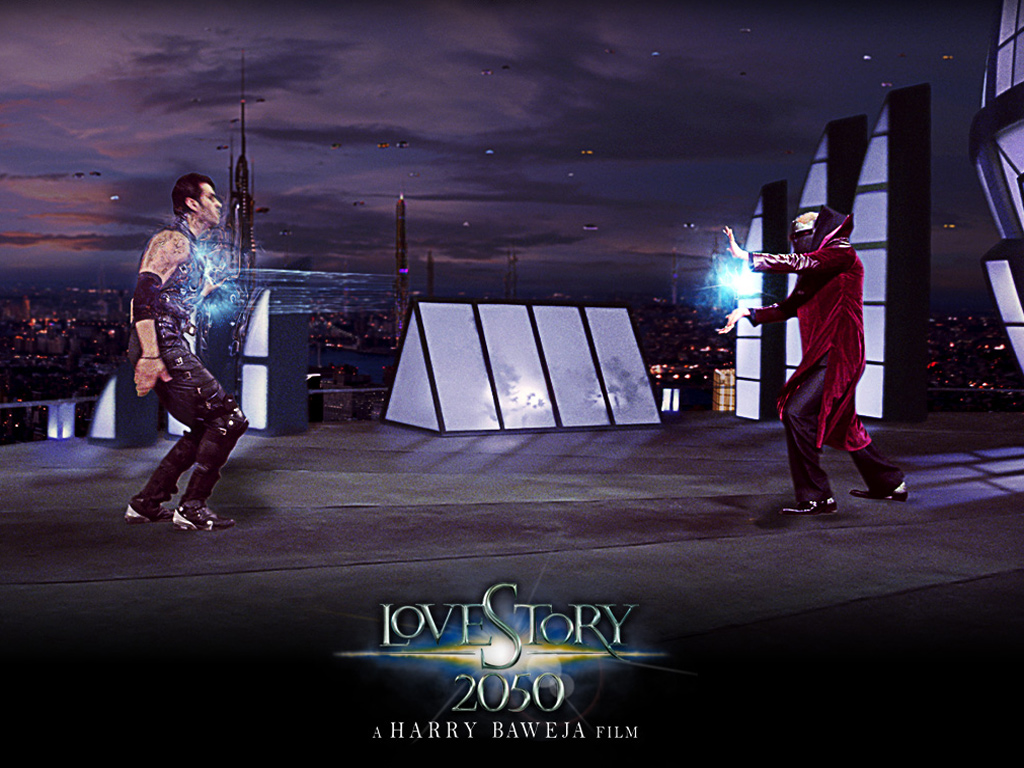 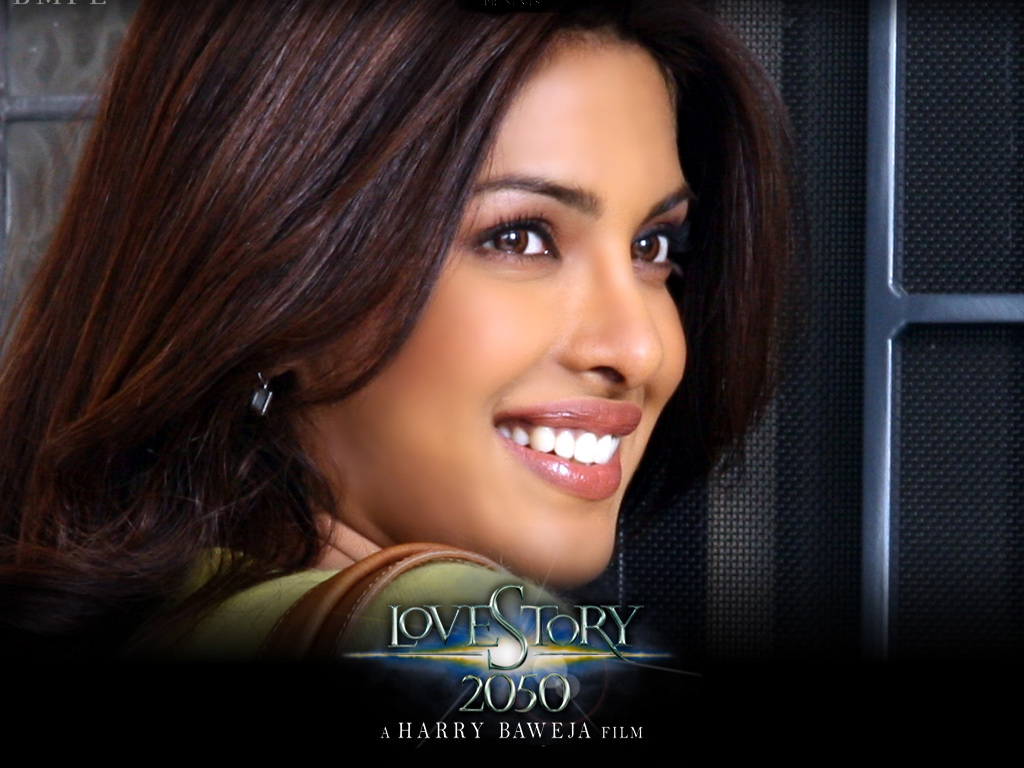 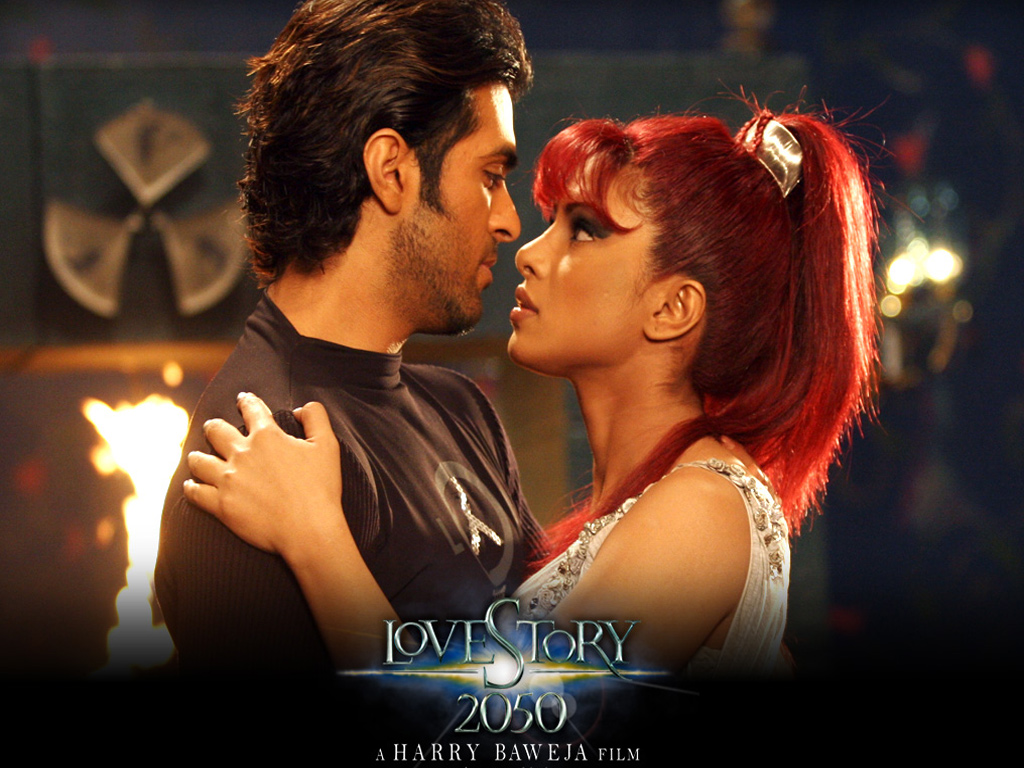