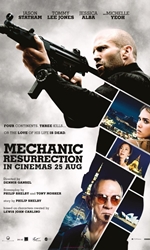 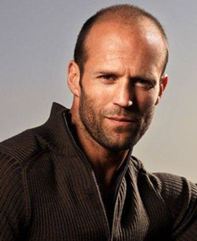 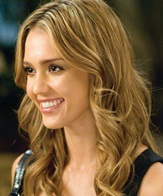 'Mechanic Resurrection' is a super-charged, stylishly packed action thriller that is mechanical and exhaustively perfunctory with a cliched 'assassin' tale.

Loaded with exhilarating action sequences which include gunfights and eye-popping stunts, the film takes off from its prequel -- the 2011 released 'The Mechanic'.

The concept isn't original and the plot, gapping with bullet-ridden holes is a pea-headed, brawn's delight. It propels into action after about one-third of its run time, when the retired ruthless hitman, Arthur Bishop (Jason Statham), in order to avoid being dragged into criminal activities, escapes from Brazil to Thailand.

In Thailand, he rescues Gina (Jessica Alba) from an abusive relationship only to realise that she has links with his foe Crain (Sam Hazeldine), who is attempting to utilise his services.

But since Bishop is reluctant to follow Crain's orders, Crain threatens to eliminate Gina. Left with no choice, Bishop visits Crain, who instructs him to finish off his three enemies: Krill (Femi Elufowojo Jr) - an African warlord who is holed up in a Malaysian, high-security prison; Jeremy (John Cenatiempo) - a human trafficker based in Sydney Australia and Max Adams (Tommy Lee Jones) a wealthy American arms dealer who is based in Bulgaria.

The instruction for the execution comes with a warning - 'Each case should seem like an accident or else Gina dies' along with a time limit.

What follows is a high speed, globe-trotting, save Gina mission. The result is obviously predictable and with no twists and turns along the way, the film lacks the elements of a mystery.

Jason Statham delivers a convincing performance which includes slick and striking stunts. This is naturally what is expected of him. He offers nothing extraordinary. He is ably supported by the agile Jessica Alba as his love interest Gina. Her kicks and chops seem forced but the duo's onscreen chemistry is palpable.

Of the supporting cast, Michelle Yeoh is wasted in a miniscule role as Bishop's friend Mae who is based in an exclusive bay in Bangkok. And the rest of the performers are flat, two-dimensional characters, as they don't have much screen time.

While the film boasts of exceptional production quality with exotic locales to boot, it is the poor camera work that makes the film seem like an amateurish attempt. Daniel Gottschalk's cinematography with jerky frames are an eye-score, it adds to the distraction.

Overall, 'Mechanic Resurrection' is a mediocre film that may appeal only to Jason Statham's fans.