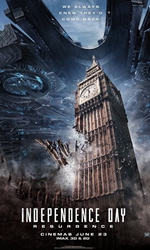 How the hell did we get into this mess? A disaster film so disastrous in its plotting and execution is hard to find. God knows, 2016 is the year of nemesis for Hollywood’s visual spectacles. One after the other they are pouring into the theatres, one more asinine than the previous, until we are left panting for breath.

"Independence Day: Resurgence" left me begging for mercy. It’s so awful in its vision and so dreadfully designed that we are left cringing on behalf of the ambitious crew and cast (crew first, since plenty of time is spent on spaceships that fly but never soar).

The few times when the storytelling rises above its mediocrity, we are too busy looking at the fatal flaws that besiege the plot’s length and breath to care about any shred of virtue that the film may choose to display for the sake of a semblance of merit.

Most of the plot is aimed at getting fans of "Independence Day" film all revved up and warmed up. By the time the alien invasion actually happens, and the female US president (yes, we get one of those) yells "Attack", we know the optical impunity of the endeavour is incapable of being matched by the director’s severely cramped vision.

Roland Emmerich knows his disaster epics, but he cannot seem to source all the information and data on how to direct disaster without disastrous results. The narrative runs and stumbles all over the place, with the older characters from the first film 20 years ago acting wise and all-knowing. They end up looking ridiculous.

One guy gets up from a 20-year-old coma to save the world with his doctor for company. The post-comatose patient and his medical help resemble two inmates in a suburban lunatic asylum.

The new younger members of the cast Liam Hemsworth, Jesse Usher, Travis Trope, etc are strictly eye-candy with as much acting talent as any amateur actor performing in high school. They try to look like they care about the future of civilisation.

While civilisation can take care of itself - thank you - who will save world cinema from such awful acting even from a veteran like Jeff Goldblum, and Bill Pullman (playing the former US president). A bigger question is, who or what will save this disaster film from its disastrous run at the box office?

"Independence Day: Resurgence" makes you wonder at the need for a sequel 20 years later. And if the call for a sequel was taken so late, why was more attention not paid to details such as character development?

We never know why Liam Hemsworth and Travis Trope are so close to one another as to feel like family. Are they lovers pretending to be buddies? The spirit of kinship never grows organically from within the sloppy script. Characters talk of being aligned to other people and to causes that define the catastrophe.

But no one is listening. Hello, is there anyone out there?