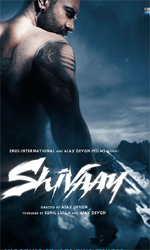 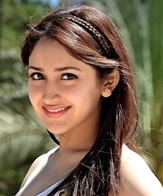 I held my breath wondering what he will show her. Relax. It`s just the tattoos which make our hero so loftily heroic. Just to drive in the hero`s anointed status, we have the noisy background score where star-stuck choruses chant in unison about Shiva, the Destroyer, blah blah.

"Shivaay" is so steeped in self-importance, so awed by its own intended grandeur, it seems the makers forget there is a story to tell. Story, there is to tell. But the plot is propelled forward in stuttering staccato waves of melodrama and action. It`s like Shekhar Kapur desperately tries to shake hands with Rohit Shetty. But they just can`t seem to find a meeting-ground. Not in this Ajay Devgn-directed lopsided melange of mayhem and melodrama.

At one point in this tedious homage to mountain climbing and cross-cultural copulation, debutante Sayyeshaa (she could do better, I`m sure) tells us that she wanted to help Ajay because "superheroes comic books ke baahar nahin milte".

Precisely the problem in "Shivaay". It wants to make Ajay a larger-than-life superhero, the kind that may look appealing in a comic book but appears amply askew in a real-life situation.

And I use "real life" with much reservation.

"Shivaay" is as real as "300" or "Baahubali", minus the comfort of escape into fantasy. Devgn plays a whole lot of super-heroic roles all in the course of one film.

He is a mountain climber (a la Sylvester Stallone in the disastrous "Cliffhanger"), and an unabashed explorer of uncharted territory. That includes a Bulgarian woman Olga (Erika Kaar, listless and clueless). The two are soon shown getting intimate and passionate, while the censor board looks the other way. This is after all, Ajay`s first stab at on screen passion, and we all must step back reverentially for the grand occasion.

The fruits of the passionate liaison is a little girl Gaura (Abigail Eames), who alas is vocally impaired. Gaura, I suspect, has been written as a mute character to accommodate the young foreigner actress` inability to converse in Hindi. I really can`t be blamed for being paranoid about the scriptural contrivances. "Shivaay" is cluttered with them.

The plot moves from trying to be a "Masoom" in reverse (illicit liaison and the complications that ensue when the child gets insistently precocious) to being a clamorous wannabe cluttered and confused adaptation of Pierre Morrel`s "Taken" where Liam Neeson rescued his teenaged daughter from flesh traders.

Some such catastrophic eventuality crops up in the narrative, like an uninvited viral fever, when our superhero Shivaay`s half-Bulgarian speechless daughter insists on meeting her mother who has by then, upped and lefte.

Recently, we saw the calamitous incidents that awaited the father and daughter when they took off to meet the girl`s mother in the Korean film "Train To Busan". But in oiling his triple tattoos, catering to his demanding daughter and saving the world, I doubt Shivaay has time to watch Korean films.

He does seem to have watched "Taken" closely. The action scenes are shot with the uni-focused singularity of a screen hero who wants to give the audience enough thrills to forget the Hollywood super-hero films.

Alas, it`s a losing battle. "Shivaay" is a cumbersome over-blown action drama. While the stunts are quite engaging at times, the drama is unbearable and unintentionally funny. It is hard to even bear with the characters, let alone devote nearly three hours of time to them. The performances are partially to blame.

Ajay`s strong-and-silent act had been done to death. Mercifully, he doesn`t try comedy here as he did in "Action Jackson". Sad to see talented actors like Vir Das and Saurabh Shukla wasted in sketchily written parts.

Aseem Bajaj`s cinematography captures the bleak foreboding mood of the plot much better than any of the actors. "Shivaay" is not the light, fun, crackerjack Diwali film you`d like to sit through this festive season. It is laden with an overbearing darkness which eclipses all of the film`s efforts to pull us into its embrace. The proceedings get so edgy that they finally topple over.

Ajay Devgn`s Diwali bonanza for his fans, "Shivaay", touted to be a thriller, in reality, is an action-packed drama that begins and remains on a languid note for much too long, making the film a slog.

It is a simple, straight-forward tale of a competent, "extra-ordinary" mountaineer, Shivaay, who is bogged down by "extraordinary circumstances". He is a lonely soul, who is glorified as a superhero and compared with the likes of Superman, Batman and Spider-Man, when he battles the thugs and the police upon his daughter Gaura getting kidnapped. At the core, Shivaay is a father-daughter bonding film.

While this could have been a gripping tale, "Shivaay" has all the traits of an amateurishly written script, which include; poor characterisation, "tell and show" scenes and poorly penned dialogues that become unintentionally humourous.

Case in point is; in a defying moment, when the wheelchair bound, Girish Karnad, says, "Kissi ko to khadaa rehna hoga", which literally means somebody has to stand up, which he does, and instantly plops! This unwarranted action, plied with the dialogue, makes the scene seem silly.

Also, when the Indian Consulate in Bulgaria, asks his employee Anu as to why she is keen to help Shivaay, the tone in which she answers, "Comics ki duniya ke bahar bahut kam superheroes milte hain", which means, outside the comic universe you hardly see any superheroes. You chuckle when she says this because, though cliched, this is probably the only finest spoken sentence, in an otherwise mediocre set of lines.

With a tattooed torso and his naturally gifted intense looks, Ajay Devgn as the gravity defying Shivaay, offers nothing that we have not seen earlier. His charm and appeal has shades of characters he has exhibited earlier. His onscreen chemistry with Erica Kaar, the free-spirited Olga seems forced and that with Sayesha Saigal who essays Anu, is non-existent.

Erica and Sayesha are natural and convincing with their histrionics. But it is Abigail Eames as Shivaay`s daughter Gaura, who is charming. She impresses you when she emotes with her speech disability.

Girish Karnad as Anu`s father and Saurabh Shukla, in miniscule roles have nothing much to offer.

The antagonists, with their quirky traits are fairly interesting, but they are lost in the maze.

On the directorial front, Ajay Devgn, has concentrated more on the technical brilliance than the emotional quotient. His screenplay is packed with artistically composed frames, brilliantly layered CGIs and visual effects. The film is dazzling to view, but, with snappy edits and tight close-ups, his action sequences with jaw-dropping set pieces, seem more manufactured than real. The impact of his story telling is lost. Also, the trekking scene is very amateurishly canned.

Mithoon`s music seamlessly integrates into the narrative. The songs are used to propel the story forward and the shlokas to lord Shiva are effectively used as the background score.

With a runtime of two hours and fifty three minutes, don`t be surprised to be hear yawns, from the audience, at regular intervals.

Overall, the title, which resonates with magnetic appeal lacks conviction.

Actor Kamaal R. Khan, whose account on Twitter has again been suspended over personal remarks over Bollywood superstar Aamir Khan, says he will take legal action against the micro-blogging site.Read More

Actor Ajay Devgn is all set to play the role of Subedar Taanaji Malusare, a military leader in the army of Shivaji and also the founder of the Maratha Empire in 17th century India, in the upcoming period-action film titled "Taanaji - The Unsung Warrior". Read More

Shivaay is a Himalayan mountaineer who is an innocent everyman and yet is capable of TRANSFORMING into a mean DESTROYER when he needs to PROTECT his family. 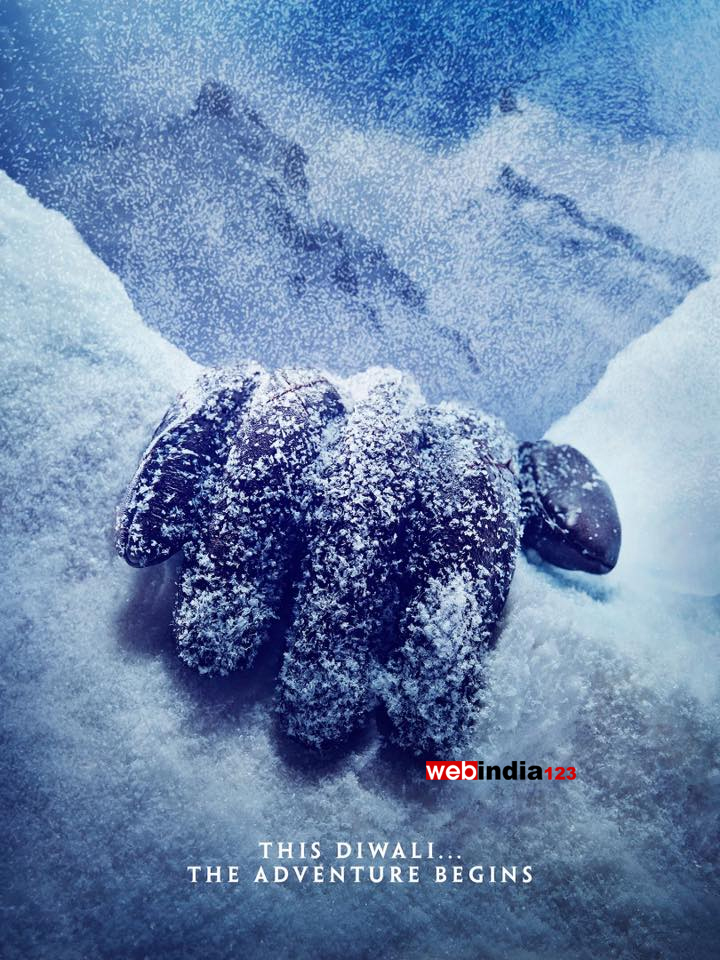 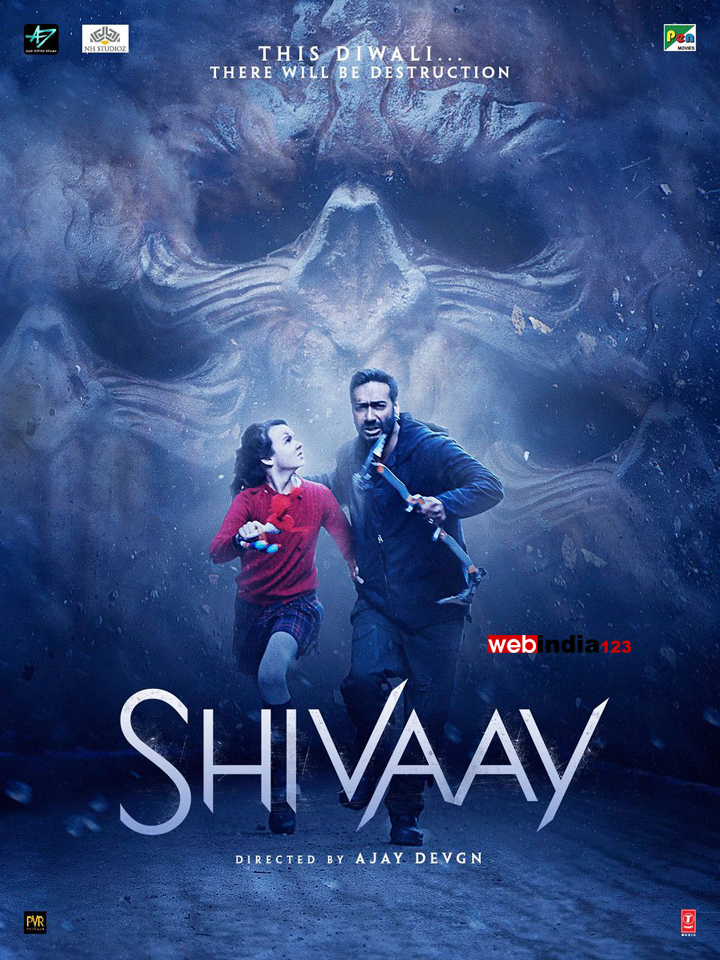 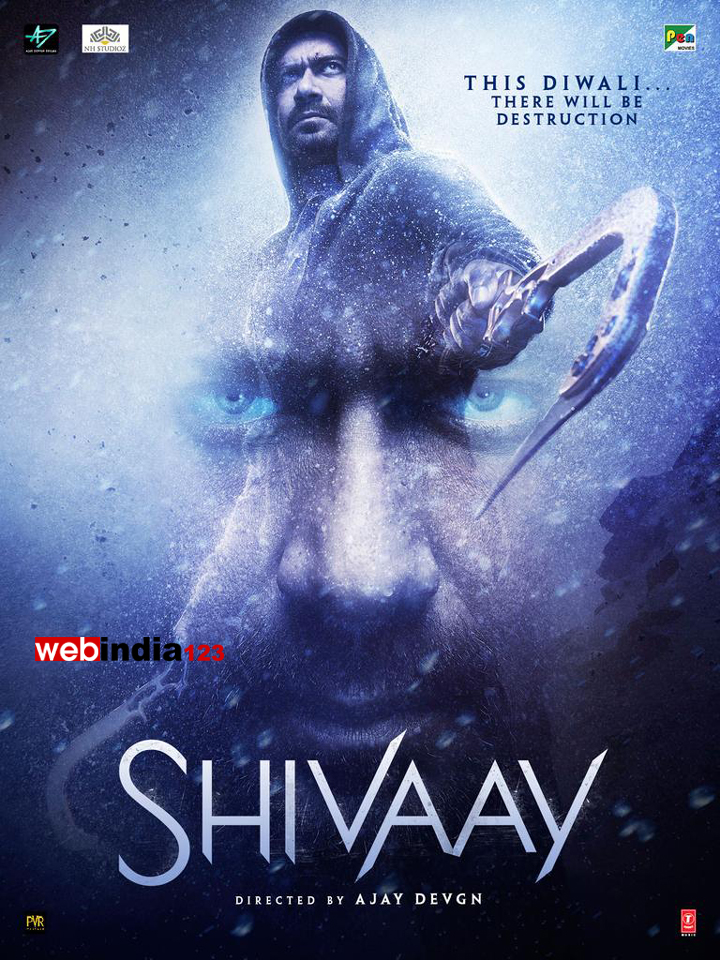 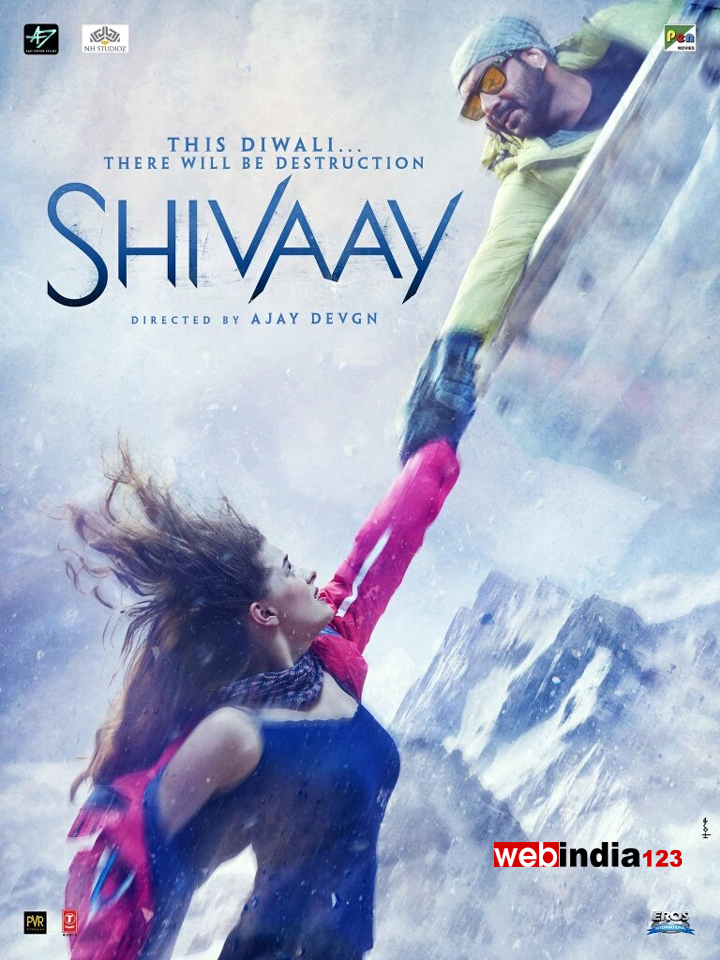 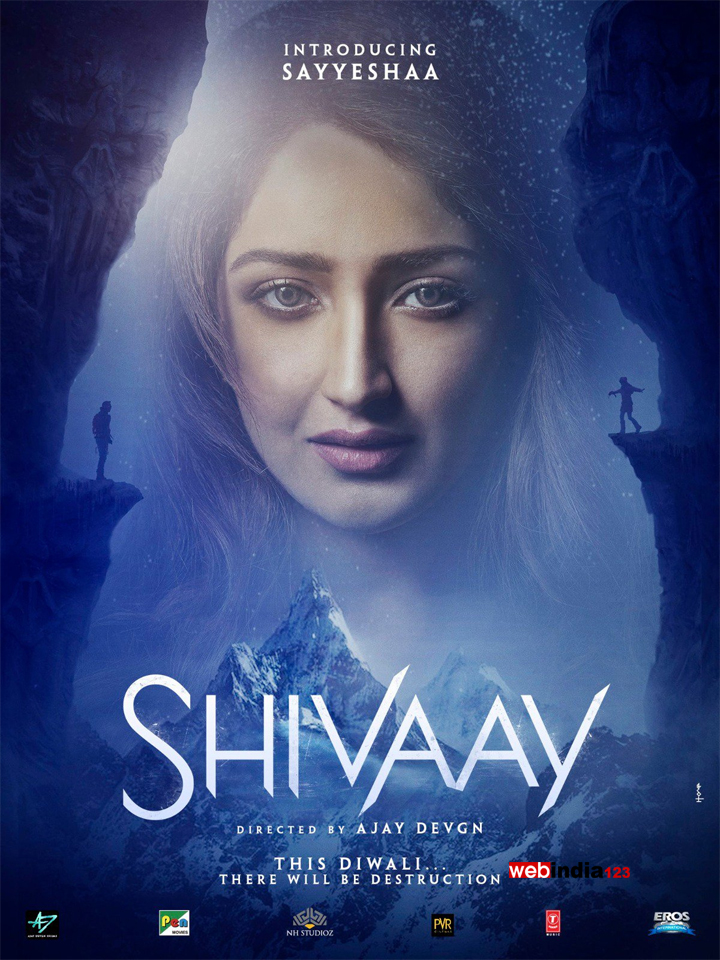 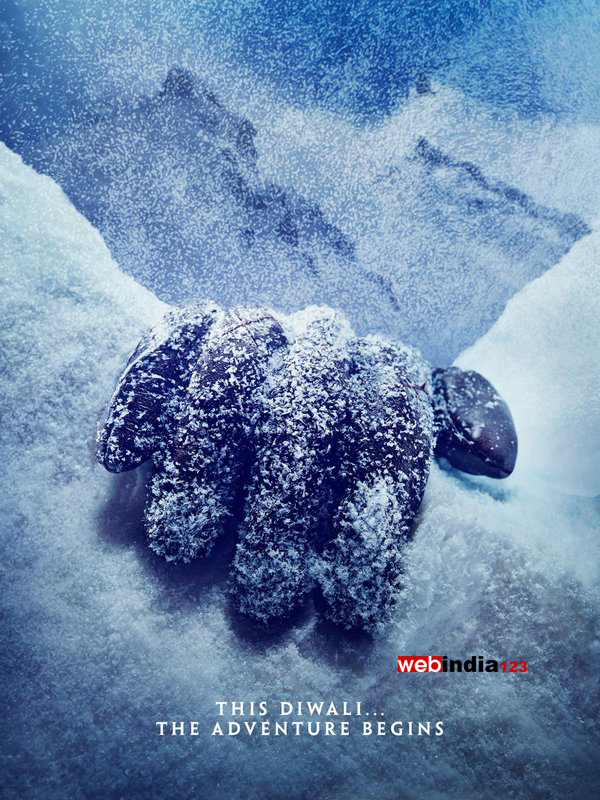 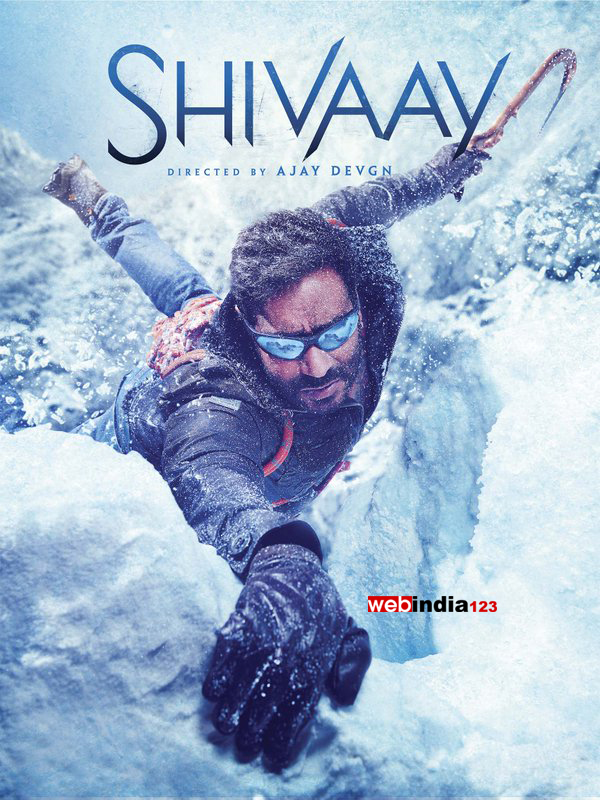 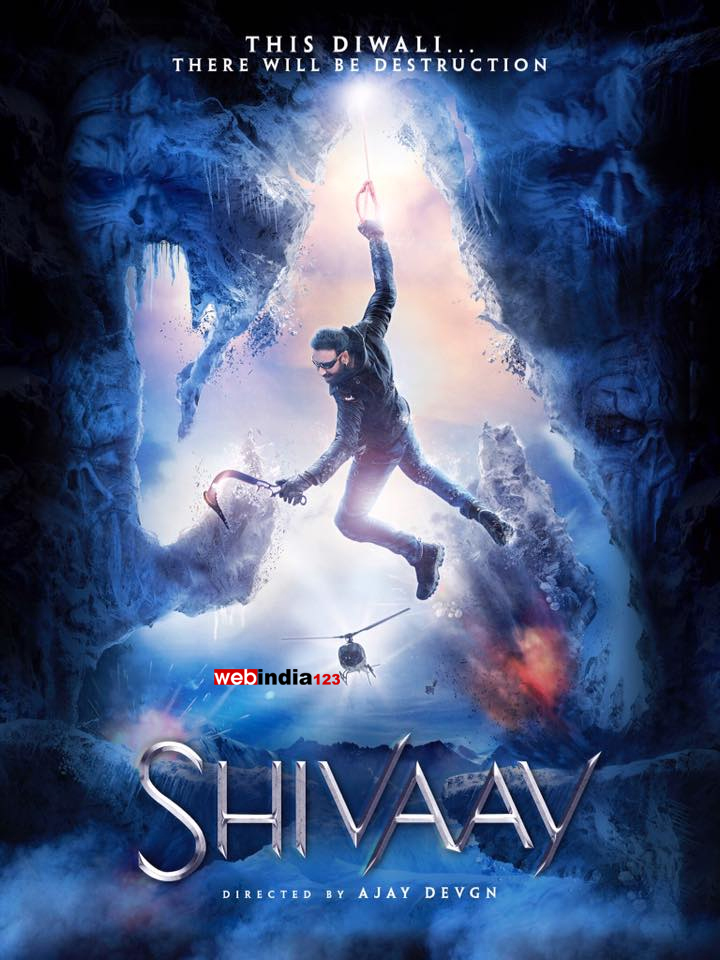 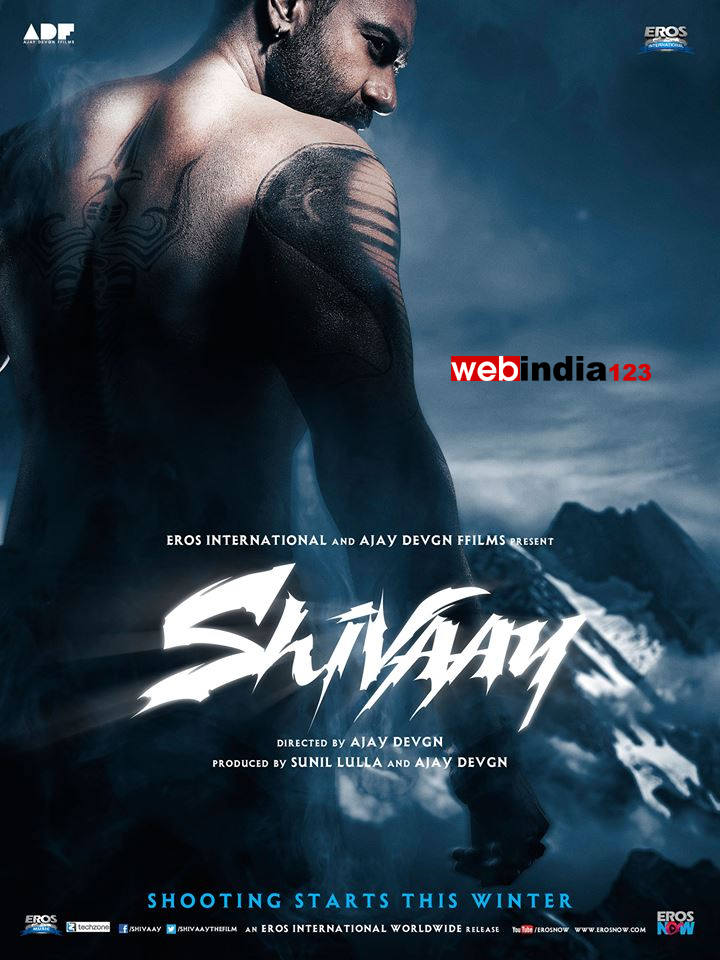