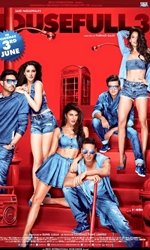 A classy film for people with crass taste, "Housefull 3" seriously blows your sensibilities away.

The film is without a doubt creatively designed with quirky character traits, good locales, glamorous images and incredible gags that hit the zero denominator much too often.

The narrative starts off as an afterthought, with a confusing and inexplicable heist that takes place in central London, which occurred six years earlier.

We are then transported to the present-day London where we are introduced to Bhatook Patel (Boman Irani) and his three daughters Ganga aka Gracy (Jacqueline Fernandes), Jamuna aka Jenny (Lisa Haydon) and Saraswati aka Sarah (Nargis Fakhri). At a party, Bhatook vehemently declares: "I’ll never get my daughters married." And he has his reasons.

Bhatook finds excuses to prevent his daughters from getting married and how three guys -- Sandy aka Sundy (Akshay Kumar) a footballer, Teddy (Riteish Deshmukh) a car racer and Bunty (Abhishek Bachchan) a rapper -- corner him into accepting them, forms the crux of the tale.

There are other minor digressions too, which complicate our prospective trio’s chances.

The directors -- who have also written the story, script and dialogues of the film -- have whipped up all the tropes of the comedy genre to give us a mish-mash of unpalatable entertainment.

With dialogues like, "Will you be my tawaif... Err wife", or "Suck the ants from my pants" with metre and rhyme, there is poetry in the dialogues as well as the lyrics, too. Also, transliterated dialogues like; "Humlog bachche nahin bana rahen hain...", which meant, "We are not kidding", prompts a chuckle. But too many of such transliterated jokes over-eggs the humour.

The actors, except for Jackie Shroff, indulge in buffoonery to the hilt. They all are loud, over-the-top characters who go overboard with their exhibition and that’s because their characters demands them to do so.

Akshay Kumar exhibits his physical prowess with his over-energetic performance of a dual personality and a crippled bound to a wheelchair, he is dynamic and is aptly supported by equally talented co-stars; Riteish Deshmukh whose tongue often slips and Abhishek Bachchan who often breaks into a crass rap. The trio have excellent onscreen "buddy" chemistry, with perfect comic timing.

Though the actresses have nothing much to offer in terms of histrionics, they are equally charming.

Chunky Pandey as the restaurateur Akhri Pasta with his recycled line, "I am joooking" is staid and stereotyped.

Jackie Shroff as the Don of Mumbai, Urja Nagri urf Urja Bhai, lacks energy. And, Boman Irani, though a talented actor, fails to leave an impact as Bhatook Patel.

With songs like "Nachenge sari sari raat, tang uthaake", "Pyar ki ma ki... puja" and a rap number like, "Teri maa behen... teri maa behen", the music and background score is loud and elementary which does not help the narrative.

Overall, "Housefull 3", with few seriously funny moments which are few and far between, is a huge let-down.

Actress Jacqueline Fernandez, who has featured in franchise films like "Housefull", "Murder", "Judwaa" and "Race", says she really connects with them.

Asked about her being a franchise favourite, Jacqueline told IANS over phone from Mumbai: "It has been crazy. From 'Housefull', 'Race' to 'Judwaa'... There have been so many franchises that there have been. I really connect with it.

"It is also very cool to continue being a part of a franchise... It feels really good."

Jacqueline, who has been roped in to be a part of the third installment of the "Race" franchise starring Salman Khan, says it is a huge deal for her to feature opposite the suRead More 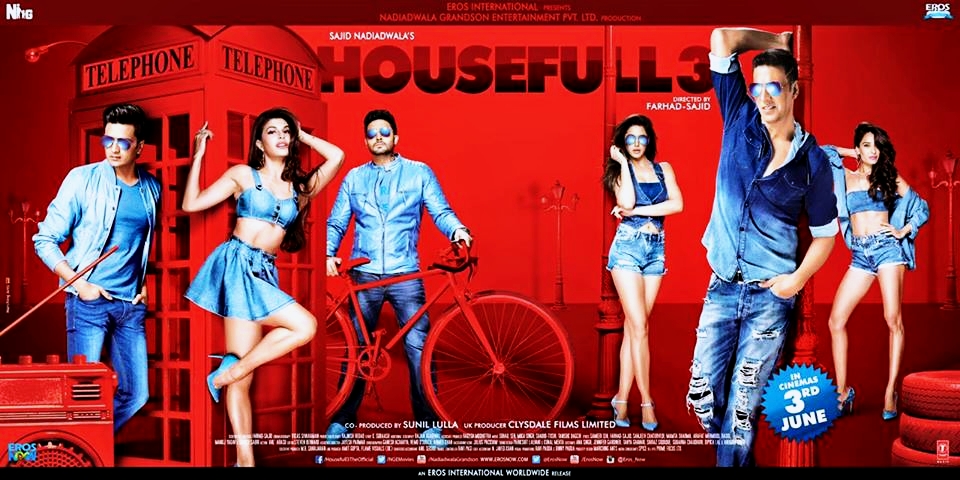 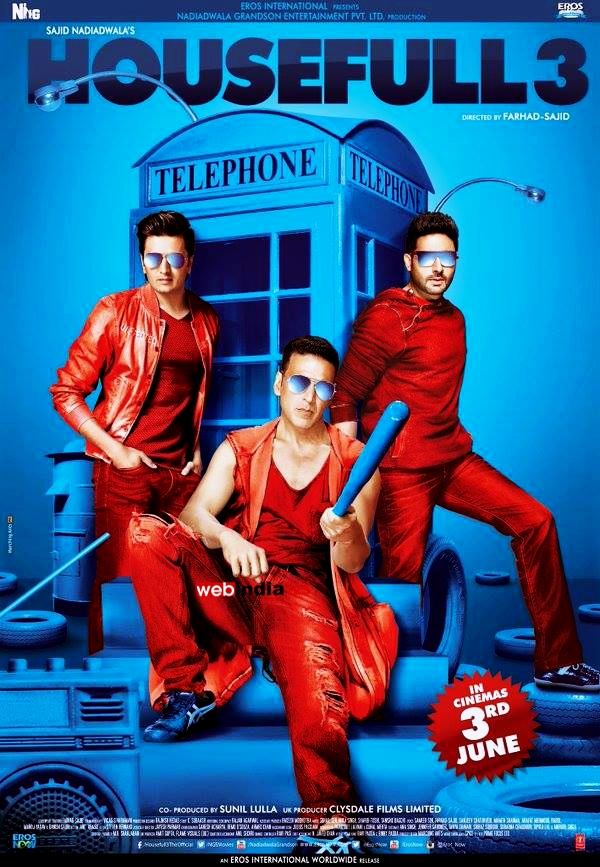 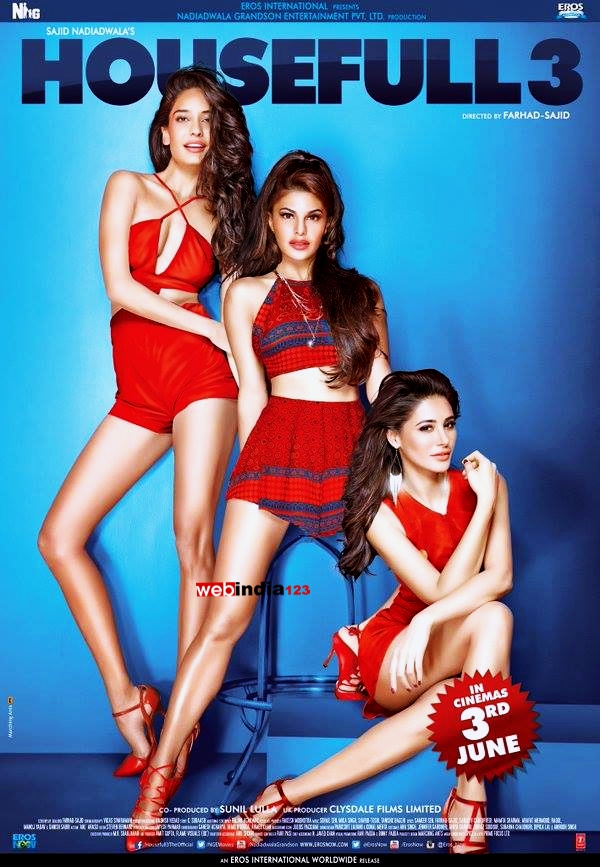 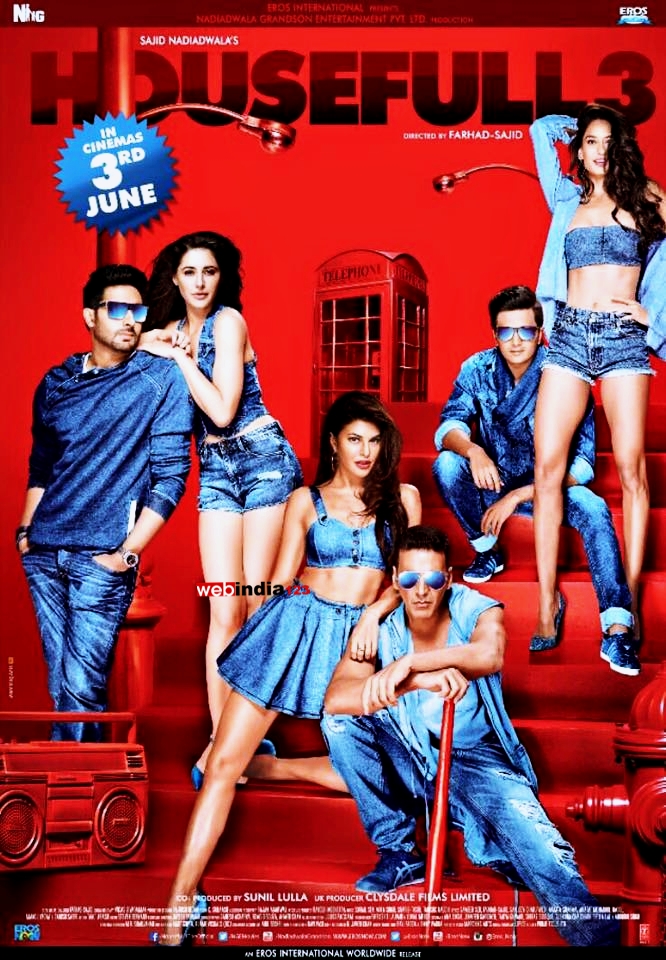 O meri jaan.. haaye
My heart beats for you baby
Now come and make me your lady