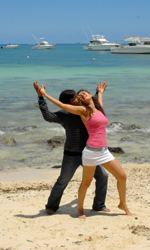 Two young men caught in a tangle for no fault of theirs. They go hammer and tongs to escape from the evil designs of baddies. This has been a pet theme of Tamil filmmakers, which is now and then recycled in Kollywood. No different is Muthirai, directed by newcomer Srinath.

Laced with action, glamour and romance, the movie embarks on a journey that is somehow bumpy. At the same time, the movie produced by Vikram Bhatt and presented by Anees of Vision Jeeva Studio, has many firsts to its credit. Srinath, a comedian, makes his foray as a director, Daniel Balaji, a popular baddie, debuts as a hero and Nithin Satya, a well-known second fiddle in many movies, dons a meaty role.

Srinath has tried to give a glossy and a stylish action-entertainer. But he has missed on the logics and convictions in his path to achieve the mission. What begins with loads of promises fizzles out to be an ordinary fare. Sequences unfold in a hasty manner and the movie ends abruptly.

The screen opens with a political murder. Azhankar Adhiyaman (Saravanan), a prominent political head is killed and his brother and aspiring chief minister Thonda Adhiyaman (Anand) is blamed for the murder. However, he too gets hurt and rushed to hospital.

The story now shifts its focus on Azhagu (Daniel Balaji), a petty thief, who comes across Sathya (Nithin Satya), a pickpocket. The two gets acquainted and start to lead a life of their own. Coming to know of Azhagu`s bad past, Satya helps reunite him with his lover (Lakshmi Rai). In the meantime, Sathya falls for Arthi (Manjari), who believes that he is a CBI officer.

Meanwhile, a man who is ready to spill the bean on Thondaman`s murder is chased by police commissioner Kishore. Before he is bumped off by the cops, he leaves a laptop with Azhagu and Sathya. Twists and turns leave the cops chase the duo to retrieve the laptop. The race begins as the two come to know the content in laptop throws light on the murder of Adhiyaman. What follows next is a contrived climax.

Sequences defying logics are rampant towards the latter half. The twists around the laptop are just idiotic, to say the least. A dual hero subject laced with multi-layered crime and intricacies of love could have been handled much better.

Daniel Balaji plays Azhagu that is quite typical of his earlier films. Though uncomfortable in dance and romantic sequences, Balaji hogs enough screen space. Sathya, who is introduced as a happy-go-lucky youngster, slowly fizzles out with nothing much to do on screen.

Debutante Manjari Fadnnis looks good but disappoints in her performance. She plays the typical commercial movie heroine, who has good looks and no brain. However Lakshmi Rai manages to sustain some interest with her screen presence thanks to a good blend of skin show and performance. The rest of cast including Ponvannan, Kishore and Haneefa could not leave any mark in cliched roles. The much hyped item song featuring Rakhi Sawant doesn`t live up to the expectations.

Letting down the director is Yuvan Shankar Raja`s musical score, which reminds one of his earlier tunes in many places. However, the songs have variety and vigour to keep the audiences glued on seats during the song sequences. A duet on Denial Balaji and Rai has been canned beautifully thanks to cinematographer Saleem and Rai`s glam show. Cinematographer Saleem (Jeeva`s associate) is the only clear winner in the film, catching the sequences with a touch of gloss.

On the whole, Muthirai is a film that promised a lot and lived some what on paper.MORE reviews