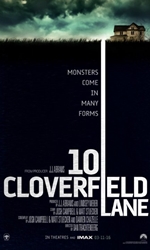 Convincing but never satiating, "10 Cloverfield Lane", is a horror film with a sensationally fabled narrative. A near-sequel to producer J.J. Abrams' 2008 release "Cloverfield", this one bears virtually no formulaic or stylistic resemblance to its predecessor.

With three distinct conflicts, presented in a generic manner that forms chapters to the narration, the director makes an impressive debut. The first starts off on a conventional note. Michelle (Mary Elizabeth Winstead), a designer miffed with her husband, leaves home and drives aimlessly on a freeway till she meets with an accident. This lays an idealistic foundation for the story to progress.

The second chapter starts with Michelle, waking up in an underground bunker with a stranger, Howard (John Goodman), telling her that he is her saviour who saved her life as, "the world outside is no longer safe". Suspicious of Howard's motive, Michelle tries to escape from the claustrophobic cell, only to find that accompanying her in the bunker is Emmett Dewitt, a neighbour of Howard who reiterates Howard's claim.

What keeps you glued to your seat is director Trachtenberg's treatment of the story. Like a psychological thriller, the scheme constantly changes. Is Howard lying or telling the truth? If he is lying, then the outside world, is a desirable possibility. But, if he is telling the truth, what next? The inter-personal dynamics in the bunker are akin to the account of the recently released Brie Larson starrer "Room".

Michelle's escape, with all its genre tropes of a catastrophic horror film, forms the third chapter. The narrative shifts, rushing into a high-adrenaline action mode with some thrilling set pieces.

Each inciting moment is surprisingly impactful. The director creates a nail-biting atmosphere that vacillates between a spirit of unease and relaxed camaraderie. The script never resorts to stereotypes. It delivers an end-of-the-seat series of suspenseful sequences which navigate in a vacuum, as most of the tension always threatens to erupt into violence.

Mary Elizabeth Winstead in the lead as Michelle splendidly balances the flight-or-fight reactions with a surprising ingenuity and self-confidence that's a challenging match for Howard's perverse manipulations. She is genuinely supported by Gallagher Jr. as Emmett, who in a docile role, ends up being caught between Michelle and Howard.

Fluctuating between a cartoonish and an aggressive, over-the-top character, John Goodman as Howard, the creepy but well intentioned doomsday prepper, is brilliant.

The highlight of the film is its setting which is beautifully captured by Jeff Cutter's intimate camera work. His darkly expressive mid-shots and close-ups in tight frames and minimalistic spaces are worth a mention. The viewing experience is elevated by the accompanying sound designed by Bear McCreary which is efficiently layered by editor Stefan Grube.

Overall, one cannot complain about the lack of entertainment. There is enough material to keep you busy throughout the 100-minute film. But the problem is, with its shifting genre gears, the film does not do justice to any of them and is unable to satisfy the viewer completely.