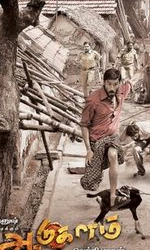 Dhanus wows with his performance in `Aadukalam` (IANS Movie Review)

Dhanush and Vetrimaran, who hit the bull`s eye with Polladhava, teamed up again for Aadukalam and have managed to write another success story. With a very different backdrop from Polladhavan, their new offering is sheer brilliance on celluloid.

Vetrimaran deserves kudos for the way he has packaged the film and made use of Dhanush`s acting skills. The actor, who is improving with every film, has delivered his career`s best performance.

The script narrates the tale of ordinary humans and their lives. The narrative makes the audiences feel closer to the events and people. Human traits like friendship, betrayal, jealousy and ego that wreaks havoc in our lives are shown in a likeable manner.

Set in a Madurai suburb where rooster or cock fights is a major sport and winning it is a prestige issue among those who breeds them. In the film, Pettaikaran (Jayabalan) is considered as the best in the business and Karuppu (Dhanush) is his pupil.

The naïve and innocent Karuppu falls head over heels in love with an Anglo-Indian girl Irene (Taapasee).

Cop Retnasamy (Nareyn), a bitter enemy of Pettai, used to conduct and win trophies in cock fighting almost every year. He decides to have one last cock fight with Pettai`s team and win.

In the crucial fight, Retnasamy plays foul by using drug-induced roosters in the first round and defeats Pettaikaran. Enter Karuppu with his rooster to save the honour and prestige of his mentor.

Pettaikaran is unwilling to let Karuppu save his skin but the `underdog` emerges victorious. Karuppu`s victory disturbs Pettai as his ego is wounded by the incident. The fact Karuppu earn both popularity and money makes Pettaikaran unhappy.

Karuppu is not aware what is going in his mentor`s mind. Pettaikaran is so jealous of Karupppu that he starts scheming against karuppu. Things get worse and lead to action packed emotional climax.

Give full marks to Dhanush for altering his body language, accent, costumes and facing the camera without make-up look. Dhanush delivers a compelling performance that is arresting and unbelievable. It won`t be an understatement to say that Dhanush has literally lived up his role as Karuppu. Jayabalan is a revelation as Pettaikaran.

Debutant heroine Taapsee, a Punjabi beauty, looks promising and steps into her character with ease. Thanks to her stylish looks, she fits the role of an Anglo Indian girl.

Dialogues are razor-sharp. Cinematography by Velraj is one of the film`s hihglights. G.V. Prakash Kumar`s background score and Yathe Yathe... song stays with the viewers. The rooster fight at interval point has been amazingly shot.

The first half is pacy and entertaining, but second half drags after a point. But the film touches both heart and mind. The credit goes entirely to Vetrimaran whose research and hard work shows on screen.

Aadukalam is as an emotional drama set in a completely new backdrop and shows a unique thing in the lives of Tamilian`s living in southern Tamil Nadu. The characters` behaviour and conflict too reflect the nature of the cock fights.

Actor-filmmaker Ameer has been brought in as the replacement for actor Vijay Sethupathi, who walked out of Dhanush's "Vada Chennai" following date issues.Read More