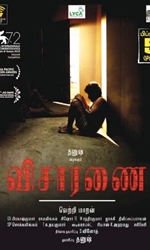 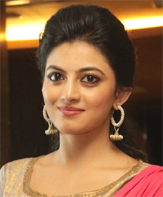 National Award-winning filmmaker Vetrimaaran's "Visaaranai" reminded me of a couple of words - system and power - from Ram Gopal Varma's (RGV) films. System, in RGV's language, is someone or an establishment with the power to do anything.

In "Visaaranai", men in khaki are bestowed upon with power, which in turn makes them the system and nobody, from the most influential person to a daily wage worker, can escape from its clutches.

And within the system, the power ranges from the high-ranking official to the lowest in the hierarchy. An inspector can't question his superior when asked to do something and there's no right or wrong in the way it's done.

In a lovely scene, an officer knows what he's about to do is wrong, but he can't stop himself from doing it. With a guilt-ridden face, he says, 'When the time comes, all of us will regret for our actions. That day, I'll speak'.

"Visaaranai", partly based on Tamil novel called "Lock Up", is an honest, spine-chilling take on these "powerful" men and how they abuse power to get their job done.

Early on, four Tamil migrants - Pandi (Dinesh), Murugan (Murugadoss), Afsal (Silambarasan) and Kumar (Pradeesh) - are taken into custody (in Guntur, Andhra Pradesh) for a crime they didn't commit. How do they get arrested in the first place one might wonder?

Well, these are 'powerless' men, faceless men, voiceless men and those with no identity. With the language barrier and no roof over their head, they sleep in a park and hence, become easy target.

The entire first half revolves around the four sacrificial lambs, caught in a web of deceit, and how they cope with police brutality. For long, Pandi and his friends are never told on what charges they are arrested and we are as clueless as them.

In the course of making them admit to the crime, they are beaten black and blue in the name of interrogation. When Murugan asks for what crime they're being beaten up, he gets the boot to his mouth, knocking out his tooth.

When the reason is finally revealed, we're told a high-profile individual's house is robbed and the police are under tremendous pressure to nab the culprits. Since time is a luxury they can't afford, they're forced to pin the crime on Pandi and his friends. It all boils down to system and power.

There's a sub-plot involving Anandi, a domestic help, who is being sexually abused by her employer, a police officer, and Pandi wants to help. In other words, she's a victim too of the system.

In the second half, the story shifts to Chennai, where an auditor, KK (Kishore), involved in a multi-crore deal is being interrogated. If he speaks, the whole government will be shaken. This time it gets dirtier. As KK points out, 'all of this is a game'. The people lower the hierarchy are merely used as pawns by the system.

"Visaaranai", made in an industry that's known for celebrating and worshiping khaki-clad heroes, this gritty and hard-hitting portrayal of the police force comes with a jolt of realism.

Not even for an instance do we feel like the filmmaker is taking sides and he achieves that because of his ability to strike a balance between good and evil. He introduces us to characters with a conscience, with the urge to do the right thing but are helpless.

With exceptionally great performances from the ensemble cast, especially from Dinesh and Samuthirakani, "Visaaranai" is absorbing, gut-wrenching and leaves you with a lump in your throat. The film hits you like a ton of bricks, right in the gut, and will haunt one for several days.