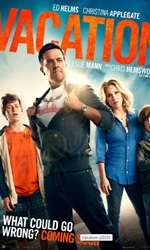 The much-awaited Warner Bros release, 'Vacation', is a test of endurance. It is not about the destination, but the journey. Packed with gags, the plot meanders without a meaningful goal.

A sequel to the 1983 released comic film 'National Lampoon Vacation', this one is a far cry from the original.

In 'National Lampoon Vacation', Clark and Ellen Griswold took their son, Rusty and daughter Audrey on a road trip to Walley World, a theme park in California. And this trip of theirs was a memorable one.

In this edition, the children are now grown up. Audrey (Leslie Mann) is settled with Stone Crandall (Chris Hemsworth), a rancher who doubles up as a weatherman in rural America. And, Rusty (Ed Helms) is a pilot for a no-frills airline called EconoAir.

Rusty leads a mundane life in Chicago with his wife Debbie (Christina Applegate) and two sons James (Skyler Gisondo) and Kevin (Steele Stebbins). For holidays during the last ten years they would rent 'the same Cabin in Michigan.'

As a chance to make up for his shortcomings as a husband and father, Rusty plans a road trip to Walley World. He does this; to give his wife and children an insight into his childhood experience and thereby relive his 'vacation of 30 years ago', in spite of his wife's desire for a romantic trip to Paris.

So in a classy looking wagon car, fitted with the latest technology, the quartet take off for the 2500 miles road journey. En route they take a detour to visit; a hot spring in Arkansas, Debbie's College in Memphis, Audrey at her farmhouse and Clark and Ellen Griswold at their residence.

From the moment they leave the driveway in suburban Chicago, nothing seems to work in favour of Rusty. His love life and equation with is children is status quo.

In their directorial debut, writer-directors Jonathan Goldstein and John Francis Daley substitute coarseness for genuine humour and intelligence. Their writing caters to the unintelligent and crass lot. They indulge in topics like; human waste, pubic hair, vomiting, cow cannibalism and outrageous sexual acts.

Unfortunately, none of these gags, most of which veers towards dark comedy, work, as they fail to amuse. They fall flat due to their absurdity and mean-spirited violent nature.

The characters too are sketchy and are just one-dimensional.

Ed Helms tries hard to ignite some spirit into his character. He plays the bumbling and clueless idiotic person in style. Christina is appealing. Skyler Gisondo, as the awkward teenager, James, who does not want to hurt his younger brother shines. Steele Stebbins as Kevin is charmingly mischievous and tends to go overboard at times. The others add to the flavour of the narration.

The often bleeped offensive and cuss words in the dialogues mars the viewing experience. And for all those who have been enticed by the prosthetics in Chris Hemsworth's underwear in the posters and trailers of 'Vacation', are in for a rude shock as all the sexually intonated scenes have been snipped by the censors.

Overall, this 'Vacation', though it makes you laugh and cry at the same time, disappoints.