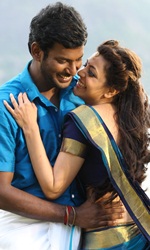 'Paayum Puli': A police drama that fizzles out too early (IANS Review )
Rating: ***

The problem with most police stories in Tamil cinema is that they're commercialized; tactic filmmakers here have been following for years in an attempt to woo the masses, who are not the same as they were a decade ago.

Suseenthiran's 'Paayum Puli' suffers from the same problem and despite some solid portions; it eventually boils down to become your regular police drama with irrelevant romantic track, an item number and forced comedy.

One of the biggest letdowns of 'Paayum Puli', which otherwise could've been an edge-of-the-seat thriller, is the role played by Kajal Aggarwal, and her scenes with Vishal. They meet for the first time on the road. Sowmya, a grown-up adult, is struggling to cross the road. This is not a joke, if that's what you're thinking.

She finds someone who is about to cross the road and walks to the other side along with that person, literally following in their footsteps. As Vishal looks on, a song describing Kajal as a rabbit plays on. Indirectly, Suseenthiran is telling us that Kajal is as fragile as the rabbit, and it all makes sense.

As Kajal tries to cross back, Vishal comes to her rescue. He takes a step, she follows, and it goes on. And these steps they take together are like the saptapadi; the seven steps people take in matrimony.

Kajal plays a learner in the film. She's always learning something. She's learning to cross roads, to drive a scooter, and sadly, she's still learning to pick up better roles.

There was absolutely no need to have a heroine in this story, but Suseenthiran, like most mainstream filmmakers, chooses to have one for reasons we never quite understand. And then, there's Soori, a regular in Suseenthiran's films, accompanying Vishal in most scenes and does what he's always expected to do, evoke some laughter even if it was unnecessary in the first place. The good part is he isn't as terrible as Kajal.

The twist, a very good one, comes towards the end of the first half. There's an interesting sub-plot about a political conspiracy and the film finally gathers some steam.

Post interval, you're involved in the thrilling story of cat-and-mouse and what's even more interesting about it is that the characters involved in it live under the same roof. The final face-off between these characters ends rather predictably, with heavy dose of melodrama.

Samuthirakkani lands a meaty role and he plays it to the hilt. His unexpected transformation is devastating and this is easily one of his best performances.

'Paayum Puli' could've been an engaging police thriller a la 'Ab Tak Chhappan', but it sadly reduces itself to a police drama that fizzles out even before it starts to get impressive. 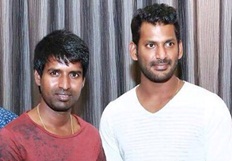