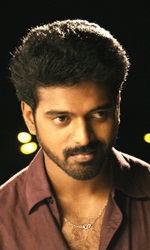 'Thakka, Thakka' - very little to cheer for (Review by By Haricharan Pudipeddi- **)

"Thakka, Thakka" shows great promise early on. It introduces us to Sathya (Vikranth), born as an illegimitate child, who deceives death as a newborn. He grows up in a brothel and at the age of 10, witnesses his mother being killed. You expect the boy to grow up and avenge his mother's murder, but nothing of that sort happens.

Sathya works as a fast food restaurant employee. His life revolves around his best friend Karthi (Aravinnd). He's like the pug dog in the Vodafone advertisement; wherever Karthi goes, he follows. They do everything together -- from working in the same place to drinking together and even sharing the same roof -- they are inseparable.

As the story progresses, the spotlight stays on Aravinnd and his romance with Indu (Abhinaya), while Sathya merely does the job of a wingman. In an awkward scene when Aravinnd drunk-dials Indu, her mother answers the call and he ends up kissing her on the phone.

Next morning, Sathya apologises to Indu on behalf of his friend and some drama ensues. But she eventually forgives Karthi. Later, when Indu's mother plans to get her married to her brother, Sathya gets her married to his friend.

The story takes a complete detour after beginning on a promising note. It focuses on the friendship between Karthi and Sathya, but their relationship isn't established well. There's a sub-plot about politics featuring Parama (Rahul Venkat), a local criminal from a family whose members commit crime like it's their hobby.

The political angle could have been used even more effectively. It could have been used as the perfect backdrop for this revenge saga. It would have given this story a much-needed twist. Although Sathya doesn't grow up yearning to take revenge, he eventually does, but it pans out as an accident in self defense.

In the last twenty minutes or so, Sathya, who was mostly a recluse until then, becomes an action hero. He brings down the empire of Parama, including his brothers, in a jiffy! And the film ends on a predictable note.

With cinematography and editing that makes you take notice of the impressive work of newcomers Sujith Sarang and Sreejith Sarang, you wish the film had a better writer. The initial promise is letdown by a poorly written film with a wafer-thin plot.