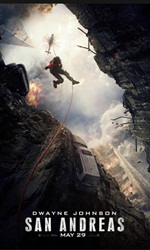 Layered with a family drama, "San Andreas" is a fictional, formulaic disaster film which showcases the largest earthquake recorded in history. The catastrophe occurs on the San Andreas Fault line. This fault line runs through California, and is the tectonic boundary between the Pacific Plate and the North American plate, which moves horizontally.

The film literally begins with a cliffhanger, where a young teenager, busy with her phone, drives off the road and lands on the side of the cliff, hanging for dear life. A rescue helicopter from the Los Angeles Fire Department (LAFD), with a journalist on board interviewing its team leader Ray Gaines (Dwayne Johnson) lands up for the rescue operation, giving us an insight into the leader's tough exterior.

But all is not hunky dory in Ray's personal life. He has been served a divorce notice by his wife Emma (Carla Gugino) and work keeps him away from his daughter Blake (Alexandra Daddario).

While he is in mid-air, away on one of his rescue missions, he calls Emma to apologise for his rude behaviour of the previous day. And while he is in conversation with her, the earthquake occurs. He diverts his plane and goes to rescue her in Los Angeles. Soon the duo learn that their daughter too is stranded in San Francisco. Together, they journey to rescue her.

Amidst the tremors that are destroying the landscape from Los Angeles to San Francisco, we witness romance brewing between Blake and Ben, a British engineer who she has just met.

There is an innocence in their bonding and you feel for Ollie, Ben's younger brother, who charms you with his British accent and innocuous insinuations.

Dwayne, as the emotionally soft person with a hard disposition is charming. And Alexandra Daddario as his know-all, intelligent daughter, steals your heart. Kylie Minogue who appears in just one scene is wasted.

What keeps you glued to the screen, apart from the performance, is Steve Yedlin's brilliant camera work. Each frame is picture perfect and the shot that captures the Hoover Dam in Nevada, is one of the many good ones. Also, his work seamlessly meshes with the VFX team's detailed, computer-generated images and effects which include the swarm effect of the earthquakes, a tsunami, boats and helicopters crashing, buildings collapsing and power lines snapping. The narration is full of dramatic effects that seem so real. The overall visual impact is spectacular.

What does not work for the film is the slightly off-balance script written by Carlton Cuse. While the family drama is interesting and gripping, it pales before the magnitude of the disaster. Also, the mayhem and rioting scenes during a natural disaster just do not appeal to a logical mind. You cannot connect the characters with the destruction unfolding around them.

And at the end, when Ray is asked, "So what now?", he replies, "Now we rebuild," and the American flag unfurls. This smacks of American patriotism and the moment is a killjoy.

Nevertheless, "San Andreas" is an ideal blockbuster, which reminds you about the strong temblors that destroyed Nepal and shook northern India in the recent past.