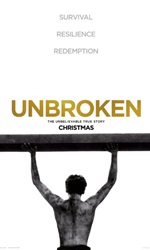 Minutes before Louie Zamperini, an athlete-turned-war hero, boards a train to participate in the 1936 Berlin Olympics, his brother Pete tells him: 'Louie, a moment of pain is worth a lifetime of glory'. From then on, pain becomes an internal part of Louie's life -- right from the 47 days he spent along with two other crew-members in a raft after a near-fatal plane crash in the shark-infested Pacific, to the time he spent as a slave in two prisoner-of-war camps in Japan.

It's those inspiring words by Pete and the superhuman force of will that not just kept Louie alive but also taught him some of life's important lessons. One of which is to have the heart to return to his captors in Japan many years later and forgive them.

'Unbroken' is a highly inspiring and commendable tale of triumph and human endurance. But, director Jolie, who narrates the gut-wrenching true story of a real war hero with utmost conviction, takes too long to tell it. It's ironic that it takes endurance to sit through this tale of endurance. But if you keep aside the film's sluggish pace, there's so much to take back from this awe-inspiring story of will power, survival and forgiveness.

Jolie's style of narration stands out, especially when she takes us back and forth in Louie's life at crucial junctures of the story. For instance, right in between the attack on US Marines by Japanese during the World War II, we're told the upbringing and early years of Louie, who as a wayward and aimless teenager spent most of his time stealing and smoking cigarettes and drinking. In another scene, minutes before the plane crash in the Pacific, we're told how Pete discovered his brother's hidden talent and subsequently nurtured and coached him to be a runner.

Most of the time is spent on narrating the harrowing journey of Louie during the war. It would've been nice to have known how he dealt with life after the War because it isn't easy to usually to come to terms with one's past. Nevertheless, Jolie has proved with her second directorial, which is as complex as her first -- 'In the Land of Blood and Honey' -- that she can handle such subjects convincingly.

But Jolie's work in 'Unbroken' becomes generic after a point and she doesn't have a clue about how to take the story forward. Agreed Louie is a hero, a punching bag who will never give in, no matter what the price. But by repeating this aspect of the story again and again, she eventually mutes its essence and power.

Jack O' Connell is fast becoming one of the most promising actors, particularly after his performances in last year's two best British films 'Starred Up' and '71'. In 'Unbroken', he goes as far as any actor could go to play his part. The unimaginable mental and physical anguish he endures is hard to digest, but the sincerity with which he has played the character in 'Unbroken' is outstanding.