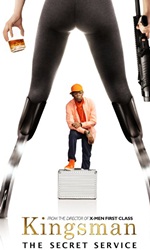 Stylish yet comical with a cartoonish tinge, director Mathew Vaughn's 'Kingsman: The Secret Service' is a poor parody of a James Bond film.

Based on a graphic novel developed by Mark Millar and Dave Gibbons, the film is about the induction of a wayward teenager into the international British spy organisation known as Kingsman.

The narration begins with establishing the circumstances under which the guilt-ridden Harry Hart (Colin Firth), a secret agent codenamed Galahad, introduces the 17-year-old Gary Unwin, also known as Eggsy (Taron Egerton), to Arthur (Michael Caine), the head of the secret service.

Eggsy's induction into the elite spy club is not a simple affair. It involves a few bouts of elimination rounds where he is pitted against five other candidates; three boys and two girls. And in spite of him being eliminated, he steps into the organisation to stop an evil entrepreneur Richard Valentine (Samuel L. Jackson) from organising a global genocide. This forms the crux of the film.

Though the narration hinders your thought process, it is the consistent performances that keep you hooked. Every character is distinct and exceptional. Colin Firth as the swift and agile Harry Hart with his graceful martial arts moves, and who single-handedly fights a mob, is convincing. So is Taron Egerton as Eggsy, the inexperienced would-be Kingsman. He is talented as well as charismatic and his sense of comic timing makes him a perfect fit for the part.

On the other hand, Michael Caine as the enigmatic organisational head is functional. Samuel L. Jackson as Richard Valentine, the crazy billionaire with a lisp, is jarring. His performance as the antagonist is stereotypical and commonplace.

They are ably supported by an earnest bunch of actors; Mark Strong as the tech-savvy Merlin who assists Eggsy in his endeavour, Sofia Boutella moving on artificially fitted legs with deadly blades as Gazelle -- Richard Valentine's bodyguard and lady in attendance and Sophie Cookson as Eggsy's competitor and only friend, Roxy.

Treated like a spoof, the script, cleverly written by Jane Goldman is superficial in content and lacks original plotting. It is packed with dry British humour and high pitched action drama. While the dialogues make frequent references to cartoonish cliches from older spy films, the violence -- smartly choreographed, funny as well as brutal, is unwarranted at times.

The writing fails to delve into the characters. The character graphs are sketchy and their motivational factors feeble, making the inciting moment matter of fact, unemotional and weak. Also the spy training is generic. The physical and mental endurance tests though innovative seemed like scenes from 'Hunger Games' and 'Divergent'.

Visually, the finale is a melody of sound and colours, with human heads popping off like in the Cadbury Eclairs advertisement. This, accompanied with an offbeat background score, not only makes the scene frivolous, but also tedious.

Overall, 'Kingsman: The Secret Service' will appeal to only those who like watching satires.