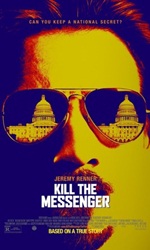 'Kill the Messenger' is an interesting take on the state of affairs in the US, which promises and promotes freedom. It also reveals the repercussions when one takes the liberty to question the government's misdeeds.

The film is, in a way, a tribute to a crusading soul wasted by the complexities of the society we live in. It is also a commentary on the integrity of investigative journalism.

A true story, it unravels the trials and tribulations of an idealistic, investigative journalist Gary Webb (Jeremy Renner), who turns from a local hero to a national pariah after he exposed the 'dark alliance' of the US government with the drug mafia.

In 1996, Webb, a staff of the San Jose Mercury News, stumbles upon a lead that would make global headlines. He is blatantly warned many times with, 'Now that you know the truth, you have the difficult decision of your life, you have a family' and 'You have no idea what you are getting into.'

This easy meandering tale gathers momentum after Gary sticks to his guns. His decision to write the story alters the course of the narration, bringing righteousness and ethics into the fore.

He exposes the CIA for using Nicaraguan rebels to smuggle cocaine into the US in exchange for raising funds to secretly support the contras. Though the story had been told before, it was Webb's writing that ties the CIA action directly to a drug epidemic among America's urban poor, especially in South Central Los Angeles.

A complicated tale, the film gives a holistic view of the scandal. It exposes the anger, embarrassment and paranoia within; the CIA, the journalistic fraternity, Gary and his family.

A realistic film with good production values, it ends on a disturbing note.

The film belongs to Jeremy Renner. Scruffy and disheveled, he fits into Webb's shoes as if it was tailor-made for him. His nervousness and trepidation which he experiences in the car park after being threatened, are palpable.

In another scene, it is also touching to hear him confess to his teenage son, Ian, convincingly portrayed by Lucas Hedges, in a very pragmatic tone: 'I've done a lot of things that I'm not proud of but I've never stopped loving you.'

Jeremy is ably supported by Rosemarie DeWitt as his edgy and supporting wife Sue; Mary Elizabeth Winstead as Anna Simons, his Reporting Editor; Ray Liotta as a CIA agent; and Micheal Sheen as the National Security Council member, who tries to warn him off.

Overall, 'some stories are too true to tell', and 'Kill the Messenger' is one such tragic tale that is an eye-opener as well as heart-wrenching. With oodles of human interest elements and drama thrown in, make sure you don't miss this one..