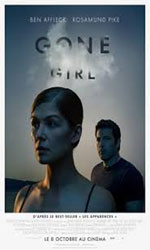 'Gone Girl' is a gripping and provocative tale of a married couple, where the wife goes missing on their fifth anniversary. What starts off as an interesting 'whodunit' crime film, with typical cinematic fodder, suddenly changes track to offer something unique - a psychological thriller.

The film book-ends with an image of the blonde-headed visage of Amy Elliot Dunne (Rosamund Pike) sitting on a sofa, looking into the camera and Nick Dunne (Ben Affleck) saying, 'When I think of my wife, I picture trying to get answers to, 'What are you thinking? How are you feeling? What have we done to each other?''

But the tone that follows this initial set of questions is rattling, when he says, 'I imagine cracking open her head, un-spooling her brain, trying to get answers.'

This is the central theme of David Fincher's faithful, intriguing adaptation of Gillian Flynn's best selling novel of the same name. And like the book, the narrative of the film is in the form of two interwoven strands of 'she-said, she-said' that unravels the mystery.

The narration takes off from the morning of July 5th in a small town in Missouri where Nick goes to the bar he co-manages with his twin sister Margo (Carrie Coon). After discussing his mundane life, he returns home to find his wife missing and the signs of something being amiss.

He calls the police. Detective Rhonda Boney (Kim Dickens) and her assistant arrive to conduct an investigation. The impending investigation unravels secrets that Nick and his wife hold close to their heart.

It is when Nick and his in-laws appeal to the media to help find Amy, the story erupts into a tabloid sensation, requiring Nick to hire a hotshot attorney Tanner Bolt (Tyler Perry) because he's not only the chief suspect, but also, 'the most hated man in America.'

The plot steadily unfolds in a way that you are slowly sucked into the web of tension when you watch Nick transform from being a helpless victim to a heinous villain and back again. The graph is incredulously amazing.

Though the story seems contrived with the characters driven by its plot mechanisms, the screenplay written by Flynn is taut. The first half sets the narration rolling and the second half is gripping.

Affleck and Pike offer fine performances. They are natural and both pull off their difficult roles with admirable self assurance. Their supporting cast is comparably excellent. Their personalities fit the characters they portray. Coon as Nick's twin sister Margo is simply brilliant and is definitely noticeable.

Perry is charismatic as the star attorney for beleaguered husbands. Kim Dickens as the compassionate detective is first rate and Neil Patrick Harris as Amy's former boyfriend named Desi Collings is splendid in his ambivalent role.

At the end of it, Flincher, with his flawless direction and meticulous control of the narrative detail leaves no stone unturned to make 'Gone Girl' an enthralling experience.