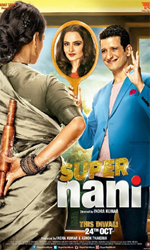 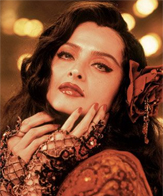 There is something to be said about star power. At a time when the biggest of stars sell themselves to the highest bidder on any medium, Rekha preserves an aura of unattainable beauty. And yet she plays the 'gharelu' roles now in this Indra Kumar drama with as much panache as she did in "Sansar" 28 years ago.

In that film too Rekha was the unerring householder willing to sublimate her ego for the sake of her family. In her new avatar as the home maker who won't flinch even when husband, son, daughter-in-law and daughter treat her like trash, Rekha brings an innate grace to her character's indignities.

I dare any other actress to revel in the broad melodramatic milieu of Indra Kumar's film. Stretches of the narrative are designed like ongoing sitcoms with repeated gags and unstoppable skits masquerading as comic relief. Shot on sets that belong to the costume dramas of the 1960s, "Super Nani" transports us to a world of embarrassingly over-stressed patriarchy.

The men in the matriarch Bharati's life are so oblivious to their own vanity that they don't know how obnoxious they sound when they order the home-maker around. The bullies get their comeuppance when Bharati transforms into...well, Rekha. A diva, albeit of the domestic-ad world.

Rekha stands unflinching at the vortex of the nautanki - Indestructible in her grace, unflinching in her determination to carry the idiocies on the narration away from prying eyes. She plays the girl from Patna with smothered dreams that merge into her current role of the 'Mother India' of the melodramatic age, filled with an implosive yearning to break out of her shell.

It is easy for urban India to laugh at Bharati's predicament as a matriarch bullied by all the men and the women of her family. For a lot of older women who live outside Modern India, oppression is still a way of life in one form or another. This is audience that Indra Kumar aims at, and shoots.

Many parts of the film in the second-half when Rekha's character achieves self-actualization through the good offices of her grandson Mann (Sharman Joshi) and a school friend(Anupam Kher) are brutally crude and impervious to the refined requirements of metropolitan audiences who live in nucleus families and have probably never bothered to know what it feels like to have an an extra-participative (read: meddlesome) matriarch in the house.

When Rekha is shown touching her callous husband's feet at a public gathering, the film will probably invoke a LOL effect on urban audiences. But there is an India outside the metropolis. And I do believe that the India which lives in the smaller towns and villages would warm up to the message of the film: learn to respect you wife, or your children would also disrespect her.

"Super Nani" marks the return of Rekha. In a role designed for the diva, she sparkles like a Diwali phooljhari that just refuses to burn out even when the festivities are over. As the beleaguered Nani's makeover artiste, Sharman Joshi again shows himself an underrated actor. While the rest of the supporting cast hams happily, Sharman remains restrained to the end.

That takes some doing here. But then Sharman is in inspiring company.

There is no one quite as filled with quiet grace as Rekha.

`Super Nani` gives a strong message to all the women that their power lies within themselves; all they need to do is discover and use it.
The journey of Bharti Bhatia is definitely a one to be experienced, as the fun, laughter, tickles, and tears of happiness will leave you with a light heart and a changed mind. 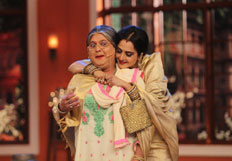