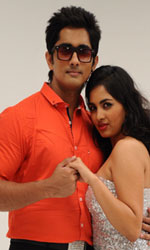 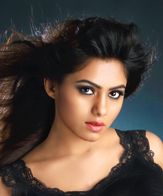 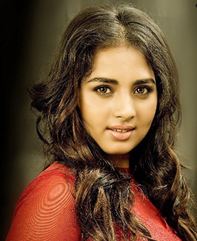 Throughout 'Enakkul Oruvan', a remake of Kannada indie hit 'Lucia', we see Siddharth desperately trying to convince us that there's a highly talented actor within the star he has become over the years.

In the film, ironically, he plays a dual role -- of that of a posh movie star and an usher in a seedy, single-screen theatre. But when you watch the movie as a remake of 'Lucia', it's slightly difficult to accept Siddharth in the lead role, originally essayed by Kannada actor Satish Ninasam, who comes with no star baggage. It's the exact opposite for Siddharth, who has mostly relied on his stardom for success.

Since 'Jigarthanda', the Siddharth we've seen is not the one who craves for stardom anymore, at least in his choice of roles. And 'Enakkul Oruvan', which comes at the right time in his career, further proves that he doesn't mind going completely de-glam. Here, he plays the role of the usher with tanned skin, so dark that it seemed unnecessary, but it still works. If as the movie star, Siddharth caters to the multiplex audiences in 'Enakkul Oruvan', then as the usher he entertains the masses.

In the film, Siddharth plays Vicky, the usher and Vignesh, the movie star. The only problem Vicky has in his almost content life is the lack of sleep. He suffers from insomnia and the cure to his problem is a pill named Lucia, which will make him fall asleep as well as dream, and he'll get to live the life he dreams. When Vicky dreams, he lives the life of Vignesh, who wishes to live the life of an ordinary man, eat from roadside eateries and ride a cycle. There's a scene where he also says the life of a superstar is boring, with not even a minute of privacy.

Siddharth must've asked himself the question what it would be to discard stardom and be an actor for a change. Imagine Siddharth waking up one fine day and realising all the stardom is gone.

'Enakkul Oruvan' gives him the opportunity to be just that. And as the guy who is mostly known for playing the ideal boyfriend material for beautiful heroines, Siddharth has finally ditched his chocolate boy tag and has successfully evolved as an actor. In real life, he may still be the star who'd get mobbed by fans when he steps out, but on screen he gets to be actor he likes to be.

While 'Enakkul Oruvan' mostly remains faithful to the original, it lacks its indie spirit and somehow still feels commercial. The film would've worked with someone with no image and stardom, but Siddharth doesn't disappoint.

Director Prasath Ramar says forthcoming Tamil psychological thriller "Enakkul Oruvan" will be a milestone in the career of actor Siddharth, who has moved away from the image audiences have had about him through this project.Read More