HOW TO TRAIN YOUR DRAGON 2

How to Train Your Dragon 2

How to Train Your Dragon 2 is a Hollywood Computer-animated action family fantasy movie directed by . Starring . 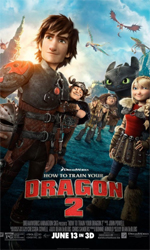 How to Train Your Dragon 2 Review

'How To Train Your Dragon 2' - wholesome entertainment (Movie Review By Troy Ribeiro; Rating: ***1/2 )

Packed with an energetic and morally complex drama, writer-director Dean DeBlois' "How To Train Your Dragon 2" is an animated, inspiring, coming-of-age, fantasy film that offers wholesome entertainment with its technical brilliance.

The film begins with a riotous aerial sport that seems to be a blend of Quidditch and pod-racing in the Viking village of Berk, five years from the events of the 2010 released edition of the film.

Berk is still controlled by the warrior chief, Stoick (Gerard Butler) and all is harmonious in the village with the dragons and humans living amicably.

The once awkward teen Hiccup (Jay Baruchel) has now bloomed into a sprightly young man, ready to succeed his father. But, he spends every free moment with his dragon companion, Toothless, away from his tribe, exploring his surroundings just because he is unsure of who he is or where he belongs. He does this because he feels that as a peace-loving guy, he sticks out like a sore thumb among the Vikings.

On one such expedition, accompanied by his girlfriend Astrid (America Ferrera), he stumbles upon a dragon trapper Eret (Kit Harrington), who claims to be working for a man named Drago (Djimon Hounsou), who's building an army of dragons for war.

Surprised with this revelation, he reports to his father - "Let us talk to Drago and avoid a war. We will make the world a better and a safer place."

But his father's instructions - "Prepare for war. No talking to Drago for we must protect our own" - makes him unhappy.

So he ventures on his own to request Eret to introduce him to Drago and this leads him to some long-lost secrets which unravel a world beyond his dreams.

The action-packed script captures the imagination from all angles, painting a proper saga of conflicting ideologies against a visually exciting backdrop. The unexpected twists, the rousing action coupled with convincing humour and emotionally affecting consequences are the highlights of the film that pad up the artistry and action.

The comic relief comes from Hiccup and Astrid's pals in the form of the love-quadrangle between Ruffnut (Kristen Wiig), the Viking boys Fishlegs (Christopher Mintz-Plasse) and Snoutlout (Jonah Hill) and Eret, whose biceps Ruffnut takes a fancy to.

The progression of the narration at times is layered with heavy expository dialogues which are attractively rendered by the star-studded cast. Each character is given their moment to shine. Two new voices have been added in this film. They are of Cate Blanchett as Valka, Hiccup's mother and of Djimon Hounsou as Drago. They both justify their presence with their precisely and powerfully delivered lines.

The production designs by Pierre-Olivier Vincent are worth a mention. The Vikings, the dragons and the setting are colourful and exciting. Great pains have been taken in the detailing of every frame especially during a scene when the two Godzilla-like "King of Dragons" Alpha present themselves.

What adds to the viewing experience are the well-choreographed aerial action pieces, the 3D effects and the striking folksy background score provided by John Powell.

Based on the "How To Train Your Dragon" book series by Cres sida Cowell, this film enthralls kids and adults alike.

How to Train Your Dragon 2 Synopsis

From the studio that brought you 'Shrek,' 'Madagascar' and 'Kung Fu Panda' comes 'How to Train Your Dragon.' Set in the mythical world of burly Vikings and wild dragons, and based on the book by Cressida Cowell, the action comedy tells the story of Hiccup, a Viking teenager who doesn’t exactly fit in with his tribe’s longstanding tradition of heroic dragon slayers. Hiccup’s world is turned upside down when he encounters a dragon that challenges he and his fellow Vikings to see the world from an entirely different point of view.

How to Train Your Dragon 2 trailer