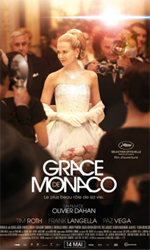 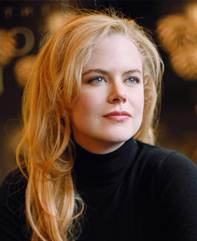 'Fairytales' and 'women of substance' have always been desirable subjects for filmmakers across the world. And "Grace of Monaco" has both; an actress marrying her Prince Charming and then sticking to her commitment for life.

Though the life of the award winning US actress Grace Patricia Kelly was "like a fairytale," this biopic captures only four years of her life as the Princess of Monaco, revealing that the "royal life" hadn't turned out to be as she had imagined. The film portrays her fascinating human side that reflects tension in her personal life and social scenario.

Director Olivier Dahan's narration picks up its threads from December 1961 in Monaco. Five years after her marriage and retirement from movies, Grace is frustrated with life for being an ornamental wife to Prince Rainier III and a doting mother, tied down to the tradition and customs of a land alien to her American upbringing and lifestyle.

A ray of hope to escape this drudgery comes in the form of her friend, director Alfred Hitchcock, who offers her a role of the psychologically scarred kleptomaniac in "Marnie". She is tempted. And much of the first half of the film concerns with her desire to return to Hollywood, despite the open misgivings of her husband and the not altogether inaccurate intimations of the tabloid press that her marriage must be on the brink.

And this is intertwined with the political tension brewing within the Principality of Monaco. They are at loggerheads with France over taxation laws. France ominously threatens Monaco with embargoes if Rainier doesn't start taxing its business houses and paying the money to France.

At this crossroad of her life, Grace is advised by her priest and friend, Father Francis Tucker to devote herself to her husband and family to help solve the crisis. And this she does in her own personal way and charms the world, which forms the crux of the film.

"Grace of Monaco" is Nicole Kidman's film all the way. She gracefully slips into Grace's skin, portraying the self-sacrificing anguish, anger and anxiety, as well as the determination of a go-getter with ease. She is aptly supported by; Tim Roth as her supportive, but occasionally indecisive husband, Frank Langella as her priest and confidante Father Tucker and Parker Posey as the mysterious frown-faced lady in waiting.

The rest of the cast: Robert Lindsay as Aristotle Onassis, Paz Vega as the socialite horse-riding Maria Callas, Jacobi as her etiquette guru and Roger Ashton-Griffiths as Alfred Hitchcock in supporting roles, just help to take the narration forward. Made on a moderate budget, the tone and texture of the visuals captures the picturesque locales and era with aplomb.

Unfortunately, packed with intriguing drama, Arash Amel's script toils on an even graph. The glorification of the Princess is done sans drama. There's no high-pitched performance and the histrionics are marred with amateurishly handled camera shots. This is very evident in a crucial scene, when Grace is asked, "Do you love the Prince?" At that decisive moment, the viewer is distracted by the jerky movement of the camera which later zooms in for a close up. The momentum of the scene is lost.

Similarly, a good part of the visuals is layered as a montage with non-diegetic dialogues, thus making the biopic a dispassionate, uninspiring, generic fare.

Overall, the zing is missing in the film and grace is lost!

Set in 1962, six years after her celebrated Wedding of the Century, GRACE OF MONACO is an intimate snapshot of a year in the life of the twentieth century's most iconic Princess - Grace Kelly - as she strived to reconcile her past and her present, a yearning for a return to the big screen with her newfound role as a mother of two, monarch of a European principality and wife to Prince Ranier III.

While contemplating overtures from Alfred Hitchcock to return to her career in Hollywood, Grace found herself plunged into a personal crisis when Rainier's modernization of an ailing Monaco was halted by Charles de Gaulle - the French President - and his attempts to not only impose French taxation on Monaco, but reclaim the principality for France by force.

The full-blown international crisis and impending French invasion that loomed - would pose a crisis not just for her family, her marriage and her country, but in Grace's private life. It would become the moment in which a cinematic icon, an American far from home, would have to face a tough decision - return to her celebrated status as a movie star, globally loved and adored, or accept that she will never act again, embrace her new role and her new identity, her duty to her husband, her children, and the world's second smallest country that has now become her home.

Grace of Monaco is a real-life fairytale, a sweeping romance, a portrait of the cinematic legend of Princess Grace and a realization that love is much more than a passion, but an obligation.