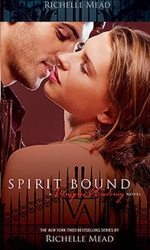 Classifying `Vampire Academy` into any one particular genre would be doing injustice to the film. It consists of part paranormal romance, part high school drama, part action with teen adventure and part coming-of-age stories that have been woven together into a predictable generic tale of vampires in St. Vladimir's Academy.

The Academy, a very Hogwartisian style institute in rural Montana houses the Moroi, the Strigoi, the Dhampir and humans. The Moroi are mortal vampires of a noble race who practice magic. They depend on human blood for food and have a code, a society, ethics, and a higher education system of sorts.

The Strigoi are the opposite of the Moroi. They are the evil vampires we're all familiar with. The Dhampir are half vampire and half human, they protect their Moroi masters from the Strigoi menace.

The film begins in a very cliched manner; a group of animated and overtly excited teenagers speeding in car and a voice over narrating, "Less than a year, when we ran away from the academy, wanting to live like ordinary people" suddenly there is a head-on collision, a horrific accident on the highway.

What follows is, Rosemarie Hathaway (Zoey Deutch) and Lissa Dragomir (Lucy Fry) being nabbed by fellow vampires and are dragged back to the secluded St. Vladimir's.

Lissa is the last of the Dragomir family, heir to the royal throne of the Moroi, and Rose's best friend and classmate at the academy. Her absence at the academy was not going to be tolerated, as she would be the successor of Queen Tatiana (Joely Richardson).

Rose is her Dhampir guardian whose sole role is to protect Lissa from any danger. This forms the crux of the narration.

The sub-plot includes, the two of them trying to decide which cute boy they like while thrashing rivals and dealing with ominous signs of conspiracy. The entire track is so reminiscent of films like aTwilight' and aHarry Potter'.

The narration though engaging, drags a little bit in the middle, with some of the individual scenes lingering for a little too long than required.

The interpersonal undercurrents between the two main protagonists are undoubtedly convincing, Zoey Deutch engages you as Rose. Here character is challenging and she exhibits her charisma to the hilt.

On the other end, Lissa shuffling from the side rungs to the supernatural Queen Bee and back again as the underdog as her image gets tarnished by anonymous villains is a bit disappointing and stiff. Similarly of the supporting cast, Danila Kozlovsky as Dimitri Belikov, Rose's highly-skilled and hunky mentor is certainly awkward, but that seems to be at least somewhat deliberate.

The performance of the rest of the cast does not leave a stamp in your memory. And the student fraternity is all effervescence and dismissible.

The script by Daniel Waters based on Richelle Meads novels is light, bubbly and pretty devoid of fangs. The dialogues filled with youth slang are verbose and difficult to follow especially while explaining the complicated mythology.

The production quality that includes the set design, the sharp and focused lighting and cinematography along with the sonic tech contributions are excellent, but oft-experienced. It builds the atmospheric moody effect without meaning to be scary, funny or suggestive.

The notable CGI effect, of the two scowling psi-hounds, is dampening enough to suggest initiative or resource limitations at work.

Overall, Director Mark Waters' 'Vampire Academy' has its moments even though it has very little to offer in terms of wittiness, craftiness, shrewdness or novelty that one would expect in a vampire film. But it is sure to satisfy only the fans of the original source material.