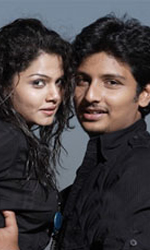 On yet another Valentine`s Day, yet another Chennai media group - the publishers of the 81-year-old Ananda Vikatan, have come up with Siva Manasulla Shakthi (with the apt acronym SMS meant to strike a chord amongst the younger generation), which disappointingly turns out to be routine fare.

It is all about the adventures of spoilt brats - an impoverished school dropout Siva (Jeeva) and a reasonably richer courier firm`s female employee Shakthi (Anuya).

During their maiden rendezvous in a train journey the duo spin fake yarns to impress each other.

While Siva claims to be an army officer, Shakthi pretends to be an airhostess.

All hell breaks loose when the secret is out leading to improbable situations that climax tamely.

Director Ramesh has maintained a racy narration interspersed with decent humour in the first half.

After the popcorn break, the movie meanders.

To their credit, Jeeva and newcomer Anuya fit their roles - the latter doing a more commendable job.

Ramesh`s inadequate attention to the second half leaves the young crowd with few reasons to cheer.