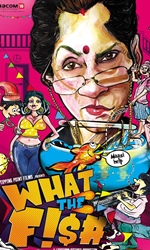 What The Fish Review

So okay. Comedies are hard to sustain for more than an hour...and yes, this one does over-run its playing time by 20 minutes, although it's just about a 100 minutes in length. And that's a 100 conveying sustained satirical strength. The quality of the humour and the context of the characters' comic tangles is, on the ha-ha-ho-ho whole, adroitly maintained, sustained and executed.

So here goes. A cantankerous old woman in Delhi, Sudha Mishra (Dimple Kapadia, delightfully over-the-top) leaves her home and its two specific properties namely the pet fish and the money-plant, in the care of her couldn't-care-less niece, who promptly hands over the responsibility to her ever accommodating boyfriend.

The rest of this wackily wound-up comedy records the relay race styled exchange of the old woman's home's care from one set of noisy eccentric characters to another.

Besides its immensely warm underbelly, what captures your attention is the originality of the material. Here is a comedy that seeks no reference points from foreign sources, does not lean towards Hollywood for its humour quotient.

No, this is not a take on Chris Columbus' "Home Alone".

Set in Delhi, though not compulsively taken up with taking us on a tour of the capital, the narrative gets its energy from the robust telling of a reasonably sturdy comic situation. The wit is never derivative but constantly probing suburban eccentricities.

The character of the Haryanvi lout Hooda (Mithun Rodwittiya), who plays patron-lover to a Mary Kom lookalike boxer from Manipur, would be a laughing stock were he not so desperately pathetic.

The performances add to the narrative's flavourful texture.

The actors, young and old, are cleverly cast. While Dimple's cranky act is expectedly winsome (when has this actress not been a winner?), Manu Rishi as the neighbourhood lech who seduces his young friend's naive fiancee (Deepti Pujari) when she is home alone puts in the other outstanding performance.

Manu is an actor who knows his character's sleazy underbelly and nails it unabashedly.

There are other interesting characters, like the young vain Haryanvi boxer Rajpal(Vishal Sharma) who likes to crossdress in the night and performs a kathak mujra in the isolation of Dimple's mauled and misused abode.

And Manjot Singh as a pet shop owner, whose sales of a particular variety of pet fish escalate, is also in-sync with the satire.

Come to think of it, the actors are all delightful, careening from the comic to the crazy without losing a beat or succumbing to the pressures of the heated humour.

I found portions of the comedy to be undernourished and over baked. The climactic scream ended up as a shuddering whimper. But that didn't take away from the swing and the sting of the frenetic chuckle-worthy happenings.

Quirky, capricious and cute, "What The Fish" is a warm little concoction with pockets of endearing eccentricity and feyness. The midriff of the narrative sags. But there are ample measures of giggle-inducing characters hiding their own ridiculousness in the garb of urbane casualness.

Gurmmeet Singh keeps the proceedings frothy and even paced.

You may not come away with much of a message to take home. But by jove, you will never ever leave your home in the care of any relative after this.

What The Fish Synopsis

Sudha Mishra (Maasiji) who is a 67 years old, divorced and grumpy woman with enormous energy and the ability to live in the present has just come back to her home in Vasant Kunj, New Delhi. She is a mother to a confused and angry young man who has given up a career in television direction and her divorced husband is a playboy in L.A .

While she was away, Sumit, her niece’s fiancé was given the responsibility to take care of the house and was clearly instructed to feed the fish & water the plants. His marriage was hinging on this.

At the end of the holiday when Sudha reaches her quaint house and starts it’s inspection with detective accuracy. Had the fish been fed? Had her plants been watered? She reaches the alcove with her beloved crystal fish bowl and collection of money plants. Everything seems to be in order but is it? As she opens her bedroom door she is taken aback by a woman rushing past her.

Sumit had thrown the helluva party for all his friends at Sudha's house and broken all the rules as instructed by her and also handed over the house to an eloping couple, who then handed it over to a miscreant property broker. The house is then taken over by a Haryanvi Jaat who is a cross dressing Kathak Dancer, followed by a tribal family from Mizoram.

What ensues is a recap of the events that took place beginning from when Sudha left her house in Sumit’s hands. The mystery unravels almost as a game of Chinese Whisper.

What The Fish Poster 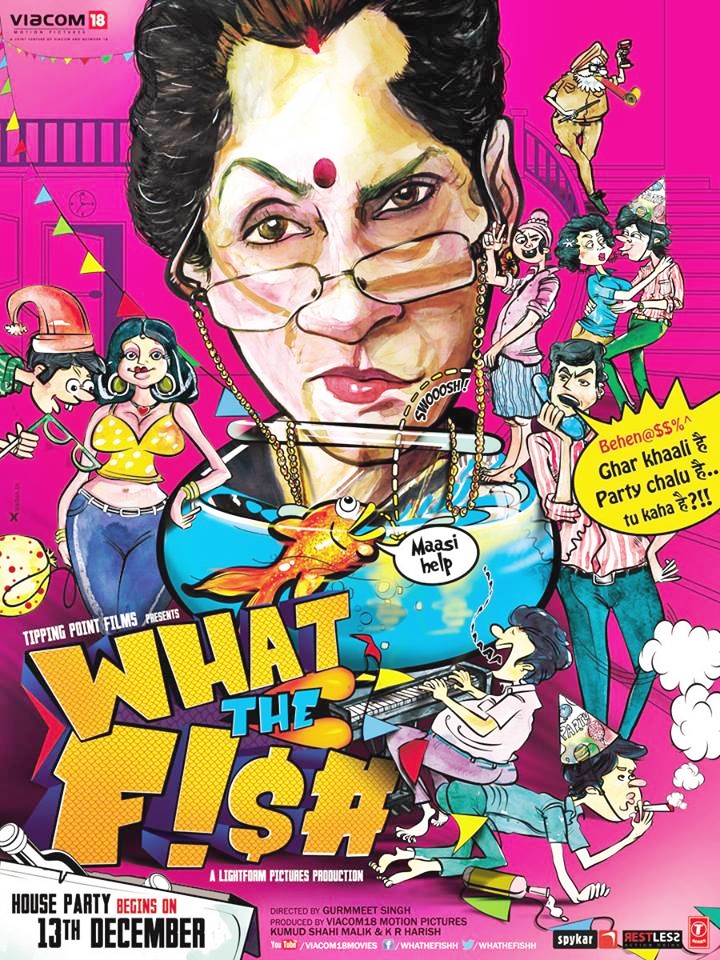 What The Fish trailer

What The Fish Songs