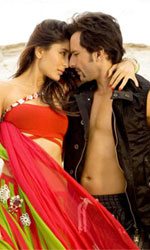 If the bizarre brew of the cunning and the cool holds together it`s mainly because of Akshay and Kareena, who create a kaleidoscopic chemistry of crime and no punishment.

The trio redeem themselves by the end of the film. As for the fourth, the villain played with feverish flatulent flamboyance by Anil Kapoor, you can`t win them all.

Tashan is a winner in unexpected ways. First-time director Vijay Krishna Acharya spears the content to a dashboard that dashes all over the place.

Most of Tashan is a zany kookie ribald and riveting road movie about a naïve wannabe criminal Bachchan Pandey (Akshay) and an English tutor named Jimmy Cliff (Saif) trapped into a heist by a crime lord who wants to learn English in haste.

Amoral, pouty, super-sculpted seductress Pooja (Kareena) plays up the two men against one another and often breaks into steamy songs and provocative dances that suggest no link between the tale of the Uttar Pradesh bhaiyya, angrezi masterji and the Kanpuri coquette and the world that cultivates such freaked out misfits.

Crime capers and road movies about characters who often get into outlandish costumes and foreign wigs at laconic locales have become a favourite at Yashraj.

Stories of small town people dreaming big have come and grown. Bunty Aur Babli worked. Jhoom Barabaar Jhoom did not. Tashan surreptitiously slips into the workable stratosphere, thanks to its super-motorized manoeuvres that take the plot into an area of utter originality.

Love it or loath it, you`ve never seen a Hindi film like Tashan before. Outrageous, over-the-top, opulent and audacious, the debutant director turns formulistic conventions inside out and upside down.

Tashan constructs a fool`s paradise of wanderers in search of that pot of gold at the end of the studio-generated rainbow.

Art director Sukant Panigrahy and cinematographer Ayananka Bose have as much fun with the art décor and locations as two kids doing water colour in kindergarten. The swirl of delightfully and daring adventures as the greasy characters travel across Greece and India in search of anything but peace is quite a gravity challenging achievement.

The actors seem to be having loads of fun. Whether we share it or not, is entirely our outlook. If the truth be told, the only one who seems to catch hold of the director`s vision in totality is Akshay. Man, what a delightfully naïve-and-knowing interpretation of the small-town criminal`s rise to fame and his helpless surrender to love. In the light of the artless world of naïve brutality that he builds for his character, Akshay`s get-up (crew-cut, crotch-hugging trousers) makes sense.

I`m not very sure why Kareena needed to re-sculpt her body to play the small-time schemer or the relevance of Saif`s dropping moustache.

In fact Saif`s relevance to the film escapes me. He rushes in as though to work over-time after Race. He seems to have no idea of the rhythm required for this extravagant take-off on Bollywood`s meanest conventions and his set-expressions are more annoying than illuminating.

Anil`s role of a criminal with his craving to master English is a monstrous aberration from the past - a Mogambo from the stylised den in Mr. India let loose in the city to create a free-funded havoc.

Akshay steals the show in almost every frame. Watch him in that tricky boat sequence with Kareena in Allahabad (yes we`re taken from Uttar Pradesh to Greece to Rajasthan to Ladakh in this jerky joyride from here to eternity) where he gets to know she is his teenage sweetheart from the town that was as frozen as the lakes of Ladakh and Greece.

Akshay takes this potentially trite and dangerously co-incidental sequence from level to level with a fluency that speaks volumes for his growth as an actor and his reverence for cinematic conventions.

You wish the director had shown some restraint in the action scenes. Cars skid and swerve around corny curbs, weary warehouses go up in flames and Akshay even takes a break atop a teetering tower to fight scores of martial artistes as the characters somersault and jump in a ghoulish pantomime of action conventions from the 1970s.

The trouble is Tashan doesn`t know where to stop. The situations get out of hand and dialogues like chadhi sukhana and aurat ki ganji make you wince. You can`t blame Acharya for losing control. After a few reels of non-stop amorality, the narration acquires its own volition.

What the film is becomes harder to pinpoint. Just go with the flow.

What happens when you throw two guys who hate each together...

A cool call center executive Jimmy Cliff (Saif Ali Khan), a desi wannabe gangster Bachchan Pande (Akshay Kumar) add for good measure a beautiful girl Pooja (Kareena Kapoor) who can`t be trusted... on a journey across spectacular India... a journey which will alter the course of their lives in more ways than one... a journey where even enemies need to trust each other if they want to be alive...

Trouble is, in this world no one can be trusted ever!

And to top it all there is the evil eye of Bhaiyyaji (Anil Kapoor)... a maverick gangster who enjoys killing people as much as he enjoys speaking Engilsh...

What you get is ...TASHAN 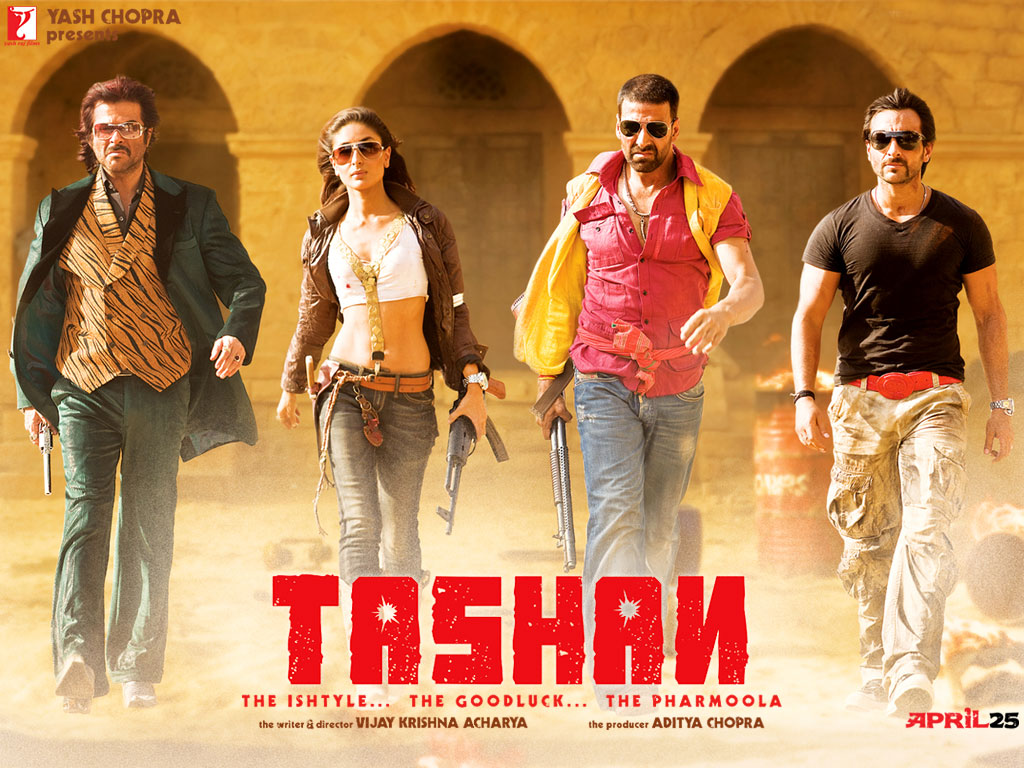 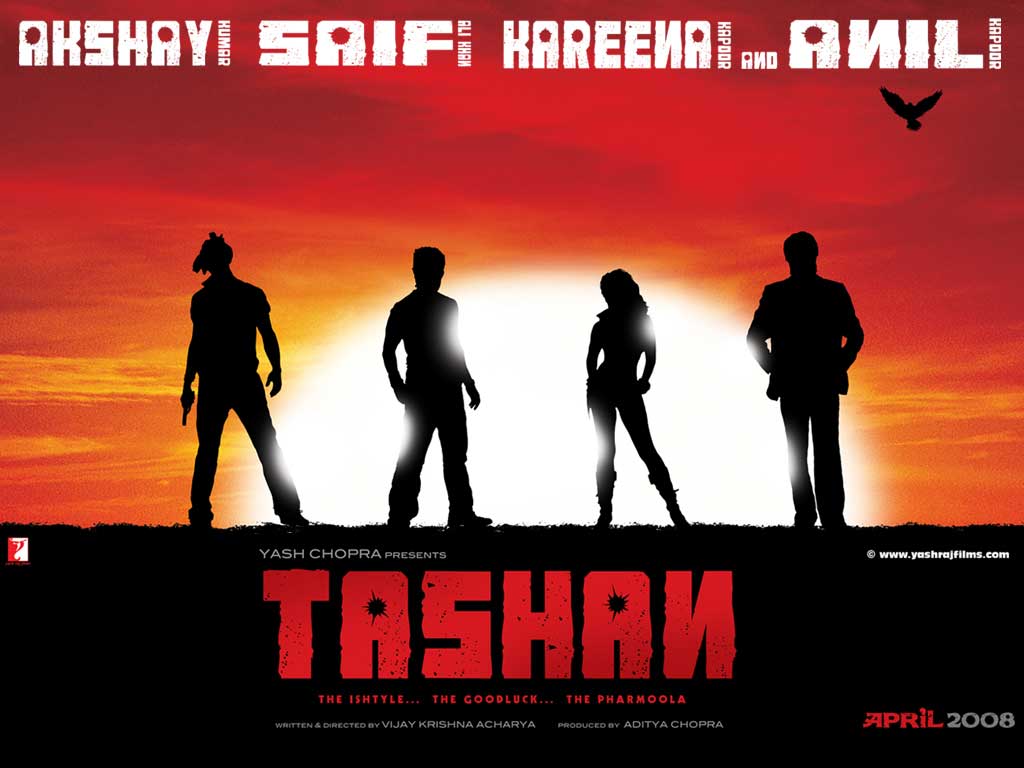