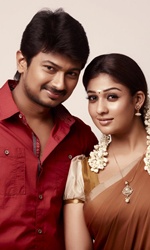 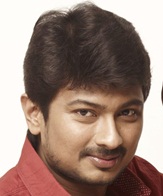 In `Ok Ok`, which released two years ago, Udhayanidhi and Santhanam upped the bromance bar with their enjoyable onscreen presence. That film was the former's cinematic debut, but with the help of the latter he pleasantly surprised the audience with his decent performance and they turned out to be the best entertaining male pair in Tamil filmdom.

In `Idhu Kathirvelan Kadhal`, also made along the lines of `Ok Ok`, the same pair fails to live up to the expectations and delivers a product that fizzles out even before it could entertain.

Udhayanidhi plays Kathirvelan, a Hanuman devotee who doesn't look up to women since the age of five for no reason. In an attempt to reconcile a misunderstanding between his sister and brother-in-law, Kathir arrives in Coimbatore. He wouldn't leave the town until he unites his sister with her husband. During his stay there, he reconnects with his long forgotten friend Mayil (Santhanam), whom he had last met in college.

Meanwhile, Kathirvelan falls head over heels for Pavitra (Nayantara), his neighbour, about whom his sister had warned and advised him to stay away from because of a family feud. Since Kathirvelan is incapable of expressing his feelings and he takes the service of Mayil to make Pavitra fall for him.

The problem with `Idhu Kathirvelan Kadhal` is that it blindly follows in the footsteps of `Ok Ok` and expects you to embrace it, without realizing that it isn't even half as funny as the latter.

With just a few scenes that genuinely evoke laughter, the film is mostly dreary, melodramatic and snail-paced. Santhanam tries his best to entertain with his overtly cliched one-liners, but not every time do they hit the bull's eye.

Even in 2014 we continue to portray a Tamil and Malayali speaking character with vibhuti and chandan tilak, respectively, while text messages in the film are exchanged in Tamil. Coimbatorean parents speak in Tamil with thick Coimbatore accent, but their daughter speaks Tamil with no accent. Such stereotypes are evident throughout the film when it could have been easily avoided.

Prabhakaran made a strong directorial debut two years back with `Sundarapandian`, which garnered not just critical acclaim for him but as well as deep respect for his talent. Sadly, all that is crushed to pulp with `Idhu Kathirvelan Kadhal`, which treads aimlessly with the hope to entertain. But it falls flat.

Santhanam is at his best but he seriously needs to reconsider playing different roles. Udhayanidhi and Nayanthara play their parts well even when there's hardly any scope to perform in the film, while talented artists like Saranya Ponvannan and Jayaprakash are wasted.

Harris Jayraj's foot-tapping music in `Ok Ok` produced some chartbusters that's remembered whenever a discussion about the film arises, but it's the exact opposite in this film as you hardly remember even one song as you walk out of the cinema hall.

`Idhu Kathirvelan Kadhal` is a done to death rom-com that hardly entertains. 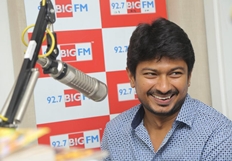