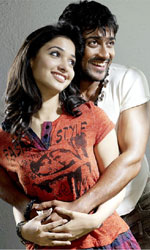 The multi-billion rupee question sought to be answered through the slickly made "Ayan" is which smuggled commodity is a lesser evil from the nation`s point of view - untaxed diamonds or harmful narcotics.

Else, there is nothing more to look out for other than chases, fisticuffs and some romance. "Ayan" has a highly predictable start, middle and climax as far as the storyline, screenplay and dialogues are concerned.

The male protagonist Deva (Surya) works as a courier for a north Chennai-based smuggler Das (Prabhu).

A friend`s sister played by Tamanna is the hero`s love-interest and she brings relief from the violence through her song and dance sequences.

The tale is as old as time, full of vendetta copied from the days of Mario Puzo`s "Godfather" onwards.

The filming, excellent cinematography, taut storytelling methods and Surya`s spirited performance are highlights of the movie, which has been made as an out-an-out commercial venture.

There are no surprises anywhere except some of the hitherto unknown shooting locales perfectly canned by M.S. Prabhu. Harris Jayaraj`s music score is a wee bit more than passing muster.

The generous promos on television are likely to bring in the crowds and give the producers and distributors their money`s worth.

Not interested in doing sequels: KV Anand on 'Ayan 2'

Cinematographer-filmmaker KV Anand says he is not too keen on making sequels and has quashed rumours that hinted his next film could be a sequel to his highly successful 2009 Tamil action-thriller "Ayan".Read More

Play more than an extended cameo in 'AAA': G.V. Prakash