Nadigayin Diary is a Tamil - movie directed by . Starring . 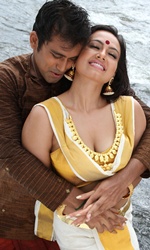 Loosely inspired by lesser known true story about Silk Smitha`s life, "Nadigayin Diary" is a bad homage to the late actress, who once ruled the industry with her dare bare roles. Even though the film claims it is not inspired by the story of `Silk`, we know for a fact, thanks to "Dirty Picture" and numerous other references, this is nothing less than a biopic. What could have been an emotionally powerful story, it gets sabotaged due to excess skin show.

Supriya, who once was a housemaid, turns a new leaf when she becomes one of the sought after actresses in tinsel town for all the wrong reasons. Along the course of her controversial yet successful career, she falls head over heels for RK. But, much to her dismay, she is driven insane when RK`s son develops feelings for her.

The film spends most of its time focusing either on Sana Khan or her troubled relationship with RK, which is only reminiscent of "Dirty Picture" with a change of cast. Except for a shocking climax, there is barely anything different in the film worth a mention.

What differentiates the film from its Hindi counterpart is its narrative that keeps viewers partly engaged. The story introduces us to a director, who knew silk from close quarters, and it is through him, we come to learn about her life.

But, there is no closure to how her life came to an end or why did she commit suicide? Instead of revealing what actually happened to Silk, the film takes a completely different path and introduces us to an unforeseen climax to the tale.

While the makers deserve some credit for being innovative, but having introduced us to a character that was supposed to tell us the passing of Silk, the whole idea of a sub-plot backfires. In spite of creating a new sub-plot, which fails to create an impact, the film loses steam even before it arrives at the climax.

Sana Khan doesn`t have much to show except her skin, which she bares as if there is no tomorrow. While she is over-the-top in few scenes and rock solid in other, but on the whole, you don`t see a powerful performance that should have ideally stunned the audiences.

It would be an insult to Smitha if Sana was even compared to her because sensuality is not about baring everything.

Even technically, there isn`t anything spectacular to rave about it. Having been dubbed from Malayalam, the film shows us Silk from the perspective of that industry, but in reality, she was famous and busy in all four southern languages.

The film does remind us about the bitter truth that showbiz is elusive and when sucked into the whirlpool of fame, there is no way out.

"Nadigayin Diary", a dubbed Tamil version of Malayalam movie "Climax", based on the controversial life of late actress Silk Smitha, is not dirty, director Anil asserted and added that it is as an emotional story.Read More