Olympus Has Fallen is a Hollywood - movie directed by . Starring . 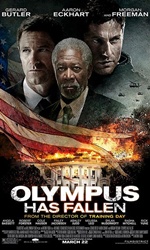 Hollywood is fascinated with the subject of The White House under threat and the Koreans attacking them. This is evident with the kind of films that they have been churning out.

Earlier in December 2012, there was a low budget film called Red Dawn and now jampacked with A-list stars, Olympus Has Fallen, and soon to follow this June would be White House Down -- all the three films deal with nearly the same subject.

But unlike Red Dawn, the stakes are much bigger and the canvas wider in Olympus Has Fallen. It`s the story of the loyal ex-handler of the President and a Secret Service Agent, Mike Banning (Gerard Butler), who while protecting President Benjamin Asher (Aaron Eckhart), takes on the North Korean terrorists who besiege the most protected building in the world - The White House. It is also reminiscent of a similar attack by the British in 1812.

The once favourite handler of the President, Mike is relegated to desk duty in the Treasury Department after a tragedy involving the first family. But 18 months later, when North Korean terrorists headed by Kang Yeonsak (Rick Yune) storm the White House, Mike finds himself racing from the Treasury to the White House to see what`s going on.

Meanwhile, the President, Vice President, Secretary of Defense and a few key staff members are held hostage in the secret underground bunker.

Drawn by the magnitude of the attack, Mike and the rest at the Pentagon, discover that Mike is alone in the mission: to locate and rescue the President`s son, eliminate all the terrorists, save the President and stop the terrorists from initiating a global nuclear war.

What adds to the spectacle is Mike`s motivation: to get the job done or die trying.

Action-packed with explosions, knife fights and helicopter crashing, Olympus Has Fallen is created on the Die Hard and Under Siege template. But what makes this film unique is its simplicity, its C-130 cargo plane, tourists, trash trucks -- all of these things that are so normal and yet so dangerous.

The look of sincerity in Gerard Butler`s eyes as the guilt-ridden underdog having a chance to prove his mettle while facing daunting odds cannot be missed, especially when he meets Connor, the President`s son in the hidden wall panels of the White House.

In this saga of the hero`s journey, director Antoine Fuqua has managed to extract perfect reactions from every actor playing his part and the most notable of them are Aaron Eckhart as President Asher, Morgan Freeman as Speaker of the House Allan Trumbull, Melissa Leo as Secretary of Defense and Angela Bassett as Secret Service Director Lynn Jacobs.

The script by first-time screenwriters Creighton Rothenberger and Katrin Benedikt is taut and engaging, keeping you hinged to your seat nearly till the very end.

On the production front, designer Derek Hill has executed an excellent job replicating the building details of the White House. The visuals are beautifully captured by cinematographer Conrad W. Hall. The computer generated images are passable and background score by Trevor Morris gives a boost to the film.

Unfortunately, Antoine and Butler who is also the producer of the film have put their entire focus on operation Olympus and have overlooked the various other layers that could make the film wholesome.

The film focuses only on the operation that happens in the White House and the Pentagon. Since this ordeal is an all-night affair, the panic and pandemonium that could have been created is not captured to the `T`. Also the cold un-enthusiastic media reaction to an event so colossal makes the entire film look so synthetic.

Overall, with the few flaws the film has it is shades and notches better than Zero Dark Thirty.