OZ - THE GREAT AND POWERFUL

Oz - The Great and Powerful 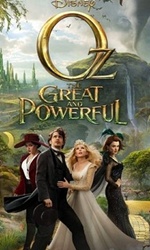 Oz - The Great and Powerful Review

The film is laced with messages for its impressionable target audience. One of the lessons revealed early in the film is three ups in life,- show up, keep up and shut up. And the other, "when we believe, anything is possible".

With these as the success mantra, the wizard proves that he is great and powerful.

The film initially begins in a black and white exposition giving it a feel of a period drama. Set in 1905 on the outskirts of Kansas, the story focuses on Oscar (James Franco), a magician. He is a charming Casanova who hypnotizes his audience as well as every pretty girl he meets. Unfortunately, luck is not on his side. In his hope to escape from the clutches of an overtly jealous and angry boyfriend of one of the girls he charms, Oscar hops onto a hot air balloon and is whisked away by a swirling tornado to the vibrant-coloured land of OZ.

From then on, the film takes a mystical twist. The Land of Oz is an enchanting fairyland with giant blooming flowers, river fairies, flying baboons, porcelain dolls, dwarfs and witches that reside in Emerald City. Here Oscar meets the three beautiful and powerful witches - Theodora (Mila Kunis), Evanora (Rachel Weisz) and Glinda (Michelle Williams) who vie for his attention.

Their motives are initially masked in mystery.

Ridden with problems of their own, the people of OZ are waiting for a saviour to rescue them. And they believe that Oscar is their knight in shining armour.

Franco as the shady magician with pointed shoes, vest and top hat slips into the role of the sly wizard with slick, and sleazy charm.

Of the three witches, Kunis` Theodora lacks a bit in histrionic stature, but she does create her mark when her corrosive tears burn rivulet scars on her cheeks.

Cinematically the film radiates with excellent workmanship and eagerness. The developments flow spontaneously, from the china doll (beautifully voiced by Joey King) and Finlay the flying monkey (voiced by Zach Braff) who pledges his eternal servitude to Oz, to the otherworldly landscapes including the flora and fauna.

The script comes off as ordinary, full of flat, repetitive dialogues about who is good, who is wicked and also whether Oscar is a real wizard or an opportunistic scoundrel or perhaps both.

Apart from this, director Sam Raimi`s unstrained passion to put together this thin, simplistic story with abundant care and precision is amply clear.

Editing by Bob Murawski is flawless. He links the film with the 3D-lensed imagery to produce a fluid, unaffectedly multidimensional experience.

"Oz - The Great and Powerful" is a mesmerizing visual treat to a generation that has not seen "Wizard of Oz".