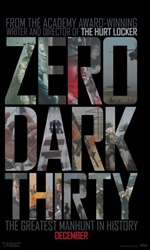 `Zero Dark Thirty` - an attempt at self-aggrandisement
Rating: *1/2
Zero Dark Thirty seems to be an American propaganda film as it does not shed much light on the truth that shrouds the death of Osama bin Laden, the man America was chasing since Sep 11, 2001. The film, in a nutshell, is motivational and applauds the CIA`s attempt of a job that America believes, was brilliantly done after a decade of perseverance.

The film begins like an amateur`s attempt at filmmaking. The white screen simply states Sep 11, 2001. What follows is a blank screen with a constant rattle of varying decibels overlapped with voices. The audio gets deafening and incomprehensible leaving you disgruntled and agitated.

The film leaps to 2003 in Saudi Arabia, in a place that does not exist, a black site. Maya (Jessica Chastain) watches as her colleague Dan (Jason Clarke) interrogates an Arab prisoner (Reda Kateb) who they suspect of having connections with Bin Laden. If you lie to me, I hurt you. I am not your friend. I am going to break you, Dan yells at the prisoner, who is bound, bruised, and not telling the Americans what they need to know. These early scenes are uncomfortable and horrific.

As the film progresses, the next forty minutes is cantankerous, torture-ridden and verbose with conversation having no link or making any sense. Initially, finding the thread to the narration is similar to the CIA`s mission of finding the brain behind the 9/11 attack - a needle in the haystack.

The narration finds stability in the last one hour when it introduces a human element. The long narrative marvelously settles on Maya and her dispassionate account of how she slowly, obsessively and inexorably moves closer and closer towards her goal.

She navigates a treacherous puzzle of dishonest suspects, coded names and suicide bombers, who know how to wriggle their way into a US safety zone. Some of her strategy is almost funny, as when she gets Dan, back in the States, to hit up the agency for 200 grand - all to buy a Lamborghini for a stooge in Kuwait who will provide a key phone number.

Luckily for her, she finds allies in the CIA director (James Gandolfini), who is impressed by her intelligence, intensity and brutally frank talk, and later also with the sardonic Navy SEALS who are tasked with bringing the fire directly to Bin Laden.

Mark Boal`s script carefully manipulates historical terrorist attacks and flits from being a detective story to a thriller. The sequence of events that occurs in Pakistan, Britain, Poland, Afghanistan, Kuwait and Abbotabad in Pakistan smoothly fits like a jigsaw puzzle and the mission is accomplished at half past twelve. The film`s title is a military time reference.

As the central character, Chastain gives what might very well be her best performance to date. But in spite of her intelligence, intensity and brutally frank talk it becomes hard to relate to Maya, as it is unimaginable - the choices she has to make with her position within the CIA.

Aside from Chastian, the rest of the cast is equally impressive. Jason Clarke is perfect as a man who is assigned to torture Kateb.

Kyle Chandler as the dismissive US Embassy Station Chief in Pakistan; Mark Strong as the hard-to-convince boss at the CIA`s Virginia headquarters; Stephen Dillane as the twice-shy National Security Advisor, and James Gandolfini as the CIA director are worth a mention.

While the cinematographer Greig Fraser has captured the visuals effectively, there seem to be a couple of goof-ups at the production end. The market place and road scenes, which are passed off as Pakistan, clearly indicate that those were shot in India and similarly, some other locations lack authenticity.

If, in Zero Dark Thirty, Kathryn Bigelow seeks to tell the story as it occurred, then Hollywood obviously has a clear-cut agenda.`