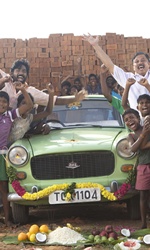 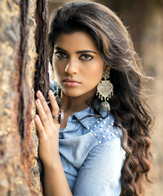 In a list featuring films that tug at your heart strings, debutant Arun Kumar's "Pannaiyarum Padminiyum" deserves to be right on the top.

An emotionally uplifting work, the film steers away from the commercial zone by constantly rewarding us with characters that not just entertain but stay with us hours after we leave the cinema hall. A slice-of-life story of four characters set against a village backdrop featuring a Padmini car in the centre. Even with a dawdling narrative, the film never ceases to amaze you with heartwarming performances and music, laced with humour at regular intervals.

A village landlord (Jayaprakash) falls in love with a Premier Padmini car at first sight. He gets to look after the car when its owner, his close relative, leaves town to visit his pregnant daughter. Pannaiyar, as the landlord is called by his village folks, hands over the car keys to his driver Murugesan (Vijay Sethupathi), who falls in love with it too.

The car becomes a lifeline of sorts to the villagers, who use it to transport a dead body, pick up stranded people on the road, carry goods from neighbouring village and even compete with a government bus, which happens to be the only motorized vehicle besides the car in the village.

Before you know it, the entire village falls in love with the car. But the rightful owner of the car is Panniyar's relative, who is likely to take away the car sooner or later. It's not the relative who takes the car away from them but a very close family member. Will the car return to Pannaiyar, who has been looking after it like his own son and bring back joy in his life?

Originally made as a short film, "Pannaiyarum Padminiyum" gets wonderfully transformed into a feature film. While the sluggish pace of the narrative may turn off a few, it is backed by probably the best screen performances in Tamil cinema in recent times. Be it Jayapraksh's endearing love for the car, his wife and daughter or Vijay Sethupathi's yearning to always hold the steering of the car or Thulasi's dream to see her husband (Pannaiyar) drive the car, the audience is swept off its feet because of their flawless acting.

The events weaved around the car shows us the importance of the vehicle in the story. We get to understand each character inside out because of the car and the role it plays in their lives. For instance, the car is just a luxury for the Panniyar's daughter, but for Pannaiyar, his wife and Murugesan, it is an important part of their lives. For the little boy, who saves up Rs. 5 for a ride in the front seat of the car, it's about never giving up on dreams.

With tighter editing, the film would have undoubtedly appealed to all sections of the audience. The romance between Vijay and Iyshwarya appears included to please the hero image of the former since every hero needs a heroine in Tamil cinema. It could have been trimmed by good 15-20 minutes, but that doesn't change the fact that it's one of the highly entertaining films of the year so far. Thankfully, the constant use of humour born out of the character played by Bala, keeps audiences entertained throughout.

Jayaprakash and Thulasi as a couple give career best performances. Their love and camaraderie is adorable, funny and emotional from the get go. Vijay Sethupathi was at his usual best, playing the character of a driver with ease. Bala as the loyal sidekick to the landlord's family evokes laughter with his slapstick presentation.

Hollywood enthusiasts are likely to compare the film with Clint Eastwood's critically acclaimed "Gran Tarino", but "Pannaiyarum Padminiyum" is very much original in many ways. As we celebrate little moments in our lives, here's a film that's reminiscent of one such moment. 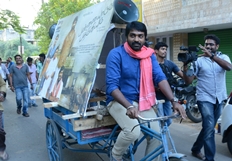 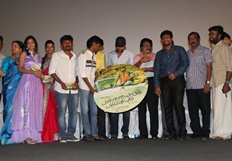