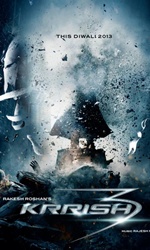 Yup, the desi super-hero comes of age. Kicking, dragging, screaming and gamboling down the nearest suburban shopping area, or peering up an airborne flight which develops a wheel problem.

Krissh, masked and magnificent in his missionary pose, is ready to take on the world... The big bad world of the dark power brokers who want to rob our earth of all its beauty.

There is something endearingly sincere about Hrithik Roshan's super-hero act. The character's innocence and his own delight at the double life that he leads as the working-class Krishna and his spectacular world-saver of a doppelganger Krissh come through in a series of dexterously executed action sequences that show the power of VFX to create a virtual reality on a par with the ones we have been watching with wide-eyed wonder in Superman, Iron Man, Spiderman...

Man, this super-hero knows his job. His timing as he poses spread-eagled for a take-off is quite awe-inspiring. Hrithik has great fun with all three parts. The scientist father (played with a vocal crutch that could have been avoided), the regular guy and the super-hero all seem real, even as the plot gets progressively mired in the incredible world of virus-infecting mutants who want to... yup you guessed it... destroy the world.

The first 15 minutes of this hurling and hefty homage to heroic hijinks is tame, almost limp. But once Krissh's cape and mask are in place, the narrative gathers pace. Encircling the emotional quotient, grabbing hold of it and placing it in the centre of the special-effects couldn't have been an easy job for the director.

Rakesh Roshan orchestrates the emotions in a flamboyant opera of opulence.

There are some effectively executed action sequences whose vivacity is compounded by the shock quotient provided by the villain Kaal, played by a steely-willed grim and menacing Vivek Oberoi.

That Kaal is evil goes without saying. Oberoi, in in his desperately dark den, wheel-chair bound and determined to be the consummate anti-God, doesn't quite strike the terror in our hearts that Xavier Bardem did the last James Bond film 'Skyfall'.

But Oberoi is adequately sinister with a touch of wry humour that comes to the surface in unexpected moments.

But after Hrithik it is Kangna Ranaut who plays the most interesting character, most interestingly. Gliding into skin-hugging leotards and leather outfits, she seems to bring an underlayer of pain to her evil part. It's a tough role, as it has no reference points to fall back on. Also because Kangna has to walk the tightrope between being an automaton and a full-blooded woman. Kangna pulls it off with aplomb.

But Priyanka Chopra is wasted. Wonder what has happened to her lately! She seems to be trying hard to make an impression in under-written parts.

Krissh 3 has its flabby moments and moments that go haywire in pursuit of entertainment. But the narrative holds together. Technical aspects are quite often remarkable, creating visuals that veer towards vitality with a gusto that earlier super-hero films in Hindi missed by a wide margin.

S. Thirru's cinematography is sumptuous yet never over-saturated. The riot of colours and drama is minimised. Krissh's flight across the skyline and the ravishing rubble of orchestrated destruction are captured in an ethos of reined-in exuberance.

Chandan Arora edits most the kinetic material with an eye on austerity of expression. But some scenes, specially in the beginning, are lazily put together, as though the narrative was clearing its throat before the big on-stage audition.

The music (by Rajesh Roshan) and the songs add nothing to the film's very high entertainment value.

At last we have India's first truly global super-hero film. Hrithik Roshan slices through the sky skillfully weaving through the emotions and drama and adventure to create a complete entertainer. There are no concessions to vulgarity in this super-hero saga. Younger viewers would specially enjoy Krissh's ability to connect with kids.

Rakesh Roshan combines the breathtaking SFX with a high level of emotion and drama. The result is quite often exhilarating and spectacular.

What a Diwali dhamaka this is!

Veteran actor-filmmaker Rakesh Roshan has completed 50 years in the Indian entertainment industry. His son and actor Hrithik Roshan is completely in the mood to celebrate.Read More

Actor Hrithik Roshan is keen to contribute towards the welfare of the differently abled by making theatres accessible to them with necessary facilities like lifts and ramps.Read More 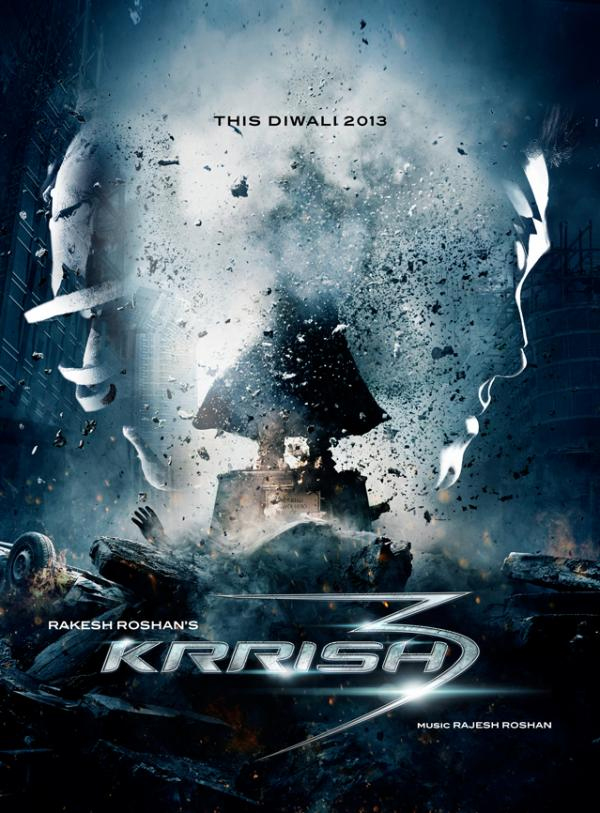 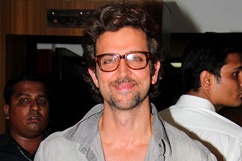 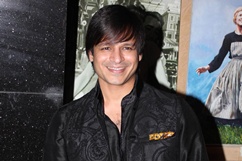 Vivek at the special screening of film Krrish 3 - Stills 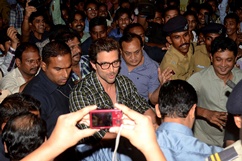 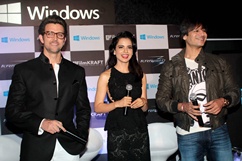