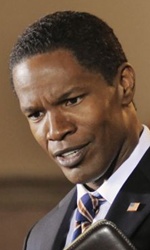 'White House Down' sleek and appealing
Rating: 3.5
Four months ago, we had an "Olympus Has Fallen", now we have a "White House Down". Both the films are a copy one-man-against the army concept shown in "Die Hard" series.

So obviously, the question arises, which one is better?

Though predictable in its story line, and with nearly the same flaws, "Olympus has Fallen" was a decent film and "White House Down" is no less a great film, in fact, it is notches higher on the emotional quotient.

It's the story of a heroic father-daughter team that saves the American president and the White House from doom.

The plot is simple and straight forward. John Cale (Channing Tatum), an Iraq War veteran and a secret service wannabe, is trying hard to be a good dad to his daughter Emily (Joey King). She is enamoured with the US politics and the White House. So when he is invited for a job interview to work as a Secret Service Agent at the White House, he takes an excited Emily along.

Unknown to his daughter, the interview does not go well. But the excited Emily, while on the tour in the White house, proudly tells the President James Sawyer (Jamie Foxx) that her father will be appointed as the Secret Service Agent and the president light-heartedly chides the father for lying.

But soon after, Emily gets separated from her father and the tour group. A bomb goes off and the White House is attacked by a heavily-armed paramilitary group. The president is taken to safety and John has to prove himself by saving both his daughter and the president before America falls into total chaos.

There is total action; dodging explosions, Tatum bashing the bad guys, escaping thorough elevator shafts, helicopters crashing and an engaging car chase across the White House Lawn. And in between all these, there are witty one-liners that off sets the tension.

Foxx, though a brilliant comic actor, is a misfit as president James Sawyer. The scenes between Tatum and Foxx are more comical than serious, but nevertheless he is shown as humane.

The terrorists headed by Jason Clarke as Stenz, who is directed by James Woods as Walker, the president's head of security are engaging. Though their motivation is somewhat murky, the madness in their pursuit grips you.

"White House Down" is moulded in a template, which is as predictable as director Emmerich's usual fare. If you are familiar with his works especially "Godzilla", "Independence Daya" and "The Day After Tomorrow", you will notice the enthralling setting, the glossy output with the easily digestible story that tapers down at the climax and no strong female characters.

With a production budget larger than "Olympus Has Fallen" the quality is quite evident. "White House Down" is far more sleek and appealing.

In Columbia Pictures’ White House Down, Capitol Policeman John Cale (Channing Tatum) has just been denied his dream job with the Secret Service of protecting President James Sawyer (Jamie Foxx). Not wanting to let down his little girl with the news, he takes her on a tour of the White House, when the complex is overtaken by a heavily armed paramilitary group. Now, with the nation’s government falling into chaos and time running out, it`s up to Cale to save the president, his daughter, and the country.