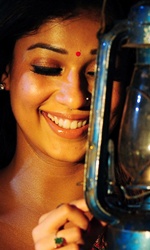 `Krishnam Vande Jagatgurum` - brilliant narrative, shoddy execution
Rating: ***
Known for marrying topical issues intelligently with modern-day cinematic elements, Radhakrishna Jagarlamudi aka Krish yet again proves why he`s considered one of the best filmmakers in the industry. However, in his latest offering "Krishnam Vande Jagatgurum" (KVJ), the director mixes a dying art form called Surabhi theatre troupe with the Bellary mining issue, only to fumble in the overall execution of the film.

Rana plays B.Tech Babu, an unenthusiastic actor in the Surabhi theatre group, all set to go to the US for higher studies on an all-paid scholarship. But his grandfather wants him to stay back and stage one last play in Bellary theatre festival.

Babu, who initially resists participating, eventually gives in after the demise of his grandfather. He travels to Bellary with his troupe and runs into Devika (Nayanthara), a documentary filmmaker, who`s trying to blow the cover of Reddapa (Milind Gunaji), who`s been mining illegally and in the process has affected the livelihood of several tribal families.

Babu helps Devika to expose Reddapa and in the process makes the fight against illegal mining his own. He has two promises to be fulfilled. Firstly, to stage the play as promised to his grandfather and secondly, to help the tribal families regain their lost land. How will Babu fulfill both the promises forms the climax?

Akin to his previous films, Krish takes the effort to successfully mix two different burning problems into the narrative of the film. What one needs to understand and appreciate is that Krish doesn`t script two stories here, but brilliantly builds two sub-plots that are part of a single story, yet run parallel.

A deft screenplay is broken at regular intervals by songs that are totally unnecessary. What makes me wonder is that why do we still believe in songs when the real hero of a film is the script, but not the actors in it.

The sub-plots finally crossing paths to form an explosive climax at the end are proof to the brilliance of Krish. But, sadly the output is very commercial, which is something you barely got to see from the director in his last three outings.

Rana has reasons to smile irrespective of the box-office verdict. His performance was outstanding and way better than all his past performances. Nayanthara deserves special mention for at least taking the effort to dub in her own voice, while her performance is average.

Brahmanandam`s character is such a letdown and it`s evident that it was introduced only with the intention of providing some relief.

Dialogues were hard-hitting and inspiring, while music by Mani Sharma, barring the title track, is passable. Kota`s cameo is very important and apt to the narrative, while Posani Krishna Murali and Kishore are completely wasted.

KVJ is an effort worth being appreciated but what`s the point of working hard when the final output is shoddy.