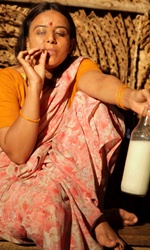 `Dandupalya` not for faint-hearted
Rating: ***
Directed by Srinivasa Raju, Dandupalya is based on real-life incidents that occurred during the late 1980s and early 1990s when a notorious gang committed series of murders in Karnataka and Andhra Pradesh (mostly in periphery of Bangalore and Kolar districts).

The director has narrated the gang`s spine-chilling encounters with innocent people in realistic realistic way.

The film, which has a lot of lot of raw elements, narrates the criminal incidents, when Dandupalya gang went on a rampage with murders, rape and loot, in a nearly accurate way.

It is not recommended for the faint-hearted, but the film is an interesting watch for movie buffs, who want different type of films.

The film narrates the story of Krishna and his gang members, including the most cruel woman Lakshmi, who planned and executed the most heinous criminal acts. When a series of murders rock the city of Bengaluru and its peripheral areas, Karnataka police is given the job of hunting down the criminals. The charge goes to an exceptionally brilliant police officer Chalapathy.

Chalapathy`s brilliant investigation and his method of interrogation helps track the guilty and render justice to victims.

Though the first half of the film is a little inconsistent, the second half is extremely engaging. The investigative part of the police officer builds up the tempo of the film, which does not subside until the climax.

Nevertheless Dandupalya has some fantastic performances and brilliant technical work. Unfortunately, the producers and director did not focus on good aspects of the film while marketing the product.

The director has also taken some freedom in making the film a little more commercial by introducing some unnecessary characters.

Actress Pooja Gandhi, whose recent films were not very successful, has delivered a stunning performance in the role of Lakshmi. She has to be appreciated for accepting a role with negative shades. Her body language and expressions are really good.

Ravi Shankar`s portrayal of police officer Chalapathy is also exceptionally good. Among the gang members every actor has done his best, but it is Markand Deshpande and Jai Dev who have come out with flying colours. Raghu Mukherjee, Nisha Kothari and Sudharani have filled in their roles adequately.

The dialogues are crisp and to the point.

Dandupalya is an upcoming Kannada crime movie starring Pooja Gandhiand Raghu Mukherjee in the lead.The movie is based on the real life incidents of notorious gang named Dandupalya. This under progress film is directed by Srinivasa Raju and produced by Girish and Prashanth under Apple Blossom creations banner.Arjun Janya is the music director and Ram Prasad is the cinematographer.