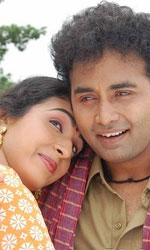 Bombaat Car is directed by well-known producer-director Ram Narayan who has so far directed over 120 films in various languages. First, he makes a film in Tamil and then simultaneously remakes it in other languages by using artists of respective languages.

Normally, Narayan chases stories that have abundant scope for trained animals who can exhibit their antics on screen. He uses the same shots in other languages films. And most of his films deal with the fight between the ghosts and villains or the faithful devotees pitted against atheist or non-believers.

Narayan, who has so far made films with elephants, monkeys, dogs and horses, has this time centred his story on a car because getting permission from the Animal Welfare Board of India was a difficult task. So Narayan has found an alternative and narrated this story laced with illogical twists and superstitious beliefs.

Bombaat Car clearly proves that the filmmaker has exhausted all his ideas. Frankly, it is not a children`s film. At the most, it could be described as a film that has used the graphics and technology in abundance to tell a senseless story.

The film reminds us of Tarzan - The Wonder Car.

The film has sequences where a car possessed by a ghost dances and sings like Michael Johnson, flies in skies, fights like super heroes to vanquish the four villains.

The script has space for comic interludes where a tantrik (the practitioner of witchcraft) tries to control the activities of the car with his foolish antics.

Narayan wants the audience to believe that the car does not take the shape of a robot because of technical upgradation, but because it has been possessed by the revenge seeking ghosts.

The story revolves around a brother and sister who are killed by some goons. Their souls decide to take revenge by entering a car that transforms itself into various sizes and shapes to kill the villains responsible for their death.

It is a pity that talented artists like Ravishankar, Ramya Krishna, Sharan and Doddanna are part of this nonsensical film which even a fifth grade student may find silly.

Deva`s background score and a couple of songs are the only impressive aspect of this film.