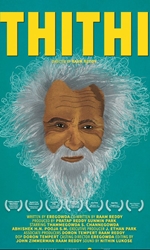 There are no actors, at least none that I could catch acting, in debutant director Raam Reddy’s "Thithi".

The way non-actors “play” characters in "Thithi" comes closest to Mahesh Tamhane’s Marathi film "Court" last year. Coincidentally, that film too had a wizened nomadic non-conformist man at its helm.

The greying bearded man in "Thithi" is Gadappa (Chanegowda), whose restless wanderings across the impoverished village in Karnataka gives to this bare austere and unassuming film a sense of imminent intangibility.

Permanence, says Gadappa’s attitude without actually stating it, is a futile pursuit. Gadappa’s son Thamanna (Thammegodwa) wants the ancestral land to tide him over his financial hardships even if it means killing off his father, on paper at least.

There are many moments in the visuals that capture the underbelly of the heartland with a complete absence of pride or prejudice. Men who feel a nirvanic ecstasy at the thought of a non-vegetarian meal, women who cook for and bully their husbands as part of a day’s work, and youngsters who cut down wood and wade into ravines to supplement the family’s meager income.

This is not the brand of poverty Bollywood is comfortable with.

The quirky plot is unparalleled by anything we’ve seen so far in Indian cinema of any genre or language. Director Raam Reddy is remarkably dispassionate in his pursuit of the essence of existence in a plot that scoffs at all attempts to find a moral centre.

As I read the above plotline, I find the description to be most unsuitable to describe what really happens in "Thithi" as the male members of one impoverish rural family in a village of Karnataka uncover their innermost cravings from greed to lust in a thrust of fate that moves calmly across the film’s craggy skyline in a ziz-zag of unvarnished emotions -- too deep for hysteria or melodrama but never too sacred for savage satire.

Death is treated as a kind of running gag in the raw storytelling. The first 10 minutes show the leery uncouth great-grandfather taunting and heckling every passerby before dropping dead. No one is sorry to see this man go after he has clearly overstayed his welcome. What follows can be termed as a funereal farce or a cremation comedy of errors where the desperation of poverty eventuates in a bankruptcy of grace in dealing with bereavement.

These are people who don’t care if people are looking while they sort out their insurmountable problems. The camera never lies in preparation for an emotional ambush. Cinematographer Doron Tempert is happy to look at the unsophisticated characters with a complete absence of fuss and finesse. "Thithi" is a pithy and pungent satire on the premium we place on human life when it is besieged by poverty.

Miraculously, director Raam Reddy weaves a love story between a porn-addicted village boy and a remarkably unspoilt gypsy girl into his brew of bizarre bereavement. These are people who will find their pleasures even as life pulls them down to the ground and crushes their desires.

I don’t know how the director has done what he has done in "Thithi" -- you know, make a film that doesn’t look, sound or smell like a film. But Raam Reddy has done it. And we can only bow our heads in reverence.

Every year, there is one outstanding non-Bollywood film that throws forward a socio-cultural dilemma in a style so direct and blunt that it doesn't feel like cinema. "Thithi" is that rare achievement of 2016. It is so real, it is unreal!