Devudu Chesina Manushulu is a Telugu - movie directed by . Starring . 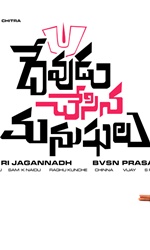 The film starts off in Vaikunta Loka where Goddess Lakshmi asks Lord Vishnu to tell her a story. He begins to narrate the tale of two orphans - Ravi Teja and Ileana, who are born in different countries, but are destined to fall in love.

Not only the script is weak, the whole narration is dull and boring. It looks like the director was in a hurry to complete the film, which also disappoints in the technical department.

Ravi Teja tries to add some energy to his badly written role and succeeds to some extent. His dance movements, dialogues and action are funny and comical. Ileana has shed a lot of weight, but looks odd in her new hairstyle.

Prakash Raj plays a different character, while Brahmanandam, Ali and Kovai Sarala have managed to tickle the audience`s funny bone with their comic timing.

Shyam K. Naidu is a good cinematographer, but somehow he has failed to meet the expectations.

Watch Devudu Chesina Manushulu if you do not have any alternative.