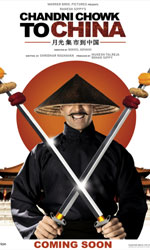 This is a film about `maar-saala` arts, not to be confused with martial arts, which Bruce Lee and Jackie Chan practise with such splendid and subtle skills on screen.

Akshay Kumar cannot be accused of the sins of subtlety. Not at all. He goes from a sweaty cook in Chandni Chowk in Delhi (India) to a cheesy fighter in China with hammers, tongs and indecipherable tongues. What lies between the extremities represented by the two oriental cultures has to be seen to be believed… or not.

So go for this one. And find out why Bollywood cannot compete with its technically savvy upcountry cousins from the West, or even China and Hong Kong.

When Jackie Chan kicks ass, man… he really kicks! No two ways about it. Akshay divides his time between being an action hero and a comic virtuoso, tripping over the line that divides the two genres with little or no scope to contain the fall as the screenplay plunges lower and lower into the depths of inanity.

Writer Sridhar Raghavan, known for his smart slick cerebral takes on formulas, spins a web of incidents chronicling the journey of Sidhu (Akshay), a cook in Chandni Chowk to the satirical samurai in Shanghai, which is littered with laughable incidents and episodes that appear more to be part of a clumsy sitcom lampooning the Chinese than a purported large-screen spectacle bringing China to Bollywood.

Director Nikhil Advani takes the hero into what looks like a carryover of the Chambal ravines in China.

Honestly, if this film had been shot anywhere in the world, it would`ve been just as bland and fatuous. What compounds the woefully inadequate narration is the abject lack of connectivity between the protagonist and the audience.

Not even for a second do we feel a rush of empathetic adrenaline for the culturally-displaced Sidhu who encounters all kinds of emaciated goons, terrorised by a suited, booted and largely-uprooted villain named Hojo (Gordon Lieu), who is no Gabbar Singh or Mogambo. Just an ageing goon in a black suit who doesn`t know it`s bad manners to pee in public, specially in the hero`s face.

Brutality when done with grace can be extremely arresting and we saw that recently in Ghajini. Chandni Chowk To China does the cause of cinematic violence a great deal of disservice.

The internationally-renowned action directors who pool in their might seem unsure of where to position the action. Perched on the Great Wall Of China, Akshay and his fellow fighters - and that includes the desi Lucy Lieu Deepika Padukone - slug it out like drunken revellers on a rowdy spree.

Elegance is in short supply in the film, except when Deepika, playing twin sisters, waltzes in with a light step and twinkling eye. She seems to have fun. We don`t. And that`s mainly because the scriptwriter forgot to include the audience in his circle of entertainment.

Large chunks of this `Adventures Of Sidhu in Blunderland` saga leave us cold and unresponsive. And when the final fight between the hero and the villain occurs, Akshay decides to turn it into a comic romp. We are more dazed than dazzled by the baffling mood swings in the plot.

Yes, there are moments that hold your attention. Sidhu`s martial arts training with twin-Deepika`s Chinese father are superbly orchestrated.

Most of the time you are looking at a film that does appalling things to Indo-Chinese relations. Not to mention our traditional perception of mainstream `masala-maar ke` entertainment.

Martial arts are turned into `maar-saala` arts. And you leave the film wondering what it was meant to be. A bird, a plane or just a pathetic parody of Jackie Chan`s comic vendetta sagas.

Chandni Chowk To China isn`t just a no-brainer. Its lobotomised laughter can make you wish for anaesthesia. At least you`d know where the numbness is coming from.

Sidhu’s lowly existence takes a turn for the exotic with the arrival of two strangers who claim him to be the reincarnation of a war hero and insist  on taking him to China. Our protagonist Sidhu (Akshay Kumar) is the lowest on the totem pole, cutting at a road side food stall in Chandni Chowk in Delhi. He longs to escape his dreary existence and looks for short-cuts with astrologers, tarot readers & fake fakirs basically believing anything except himself despite his father figure Dada’s (Mithon Chakraborty) best efforts.

His redeeming moment arrives when two strangers from China claim him as reincarnation of a war hero in the past and take him to China. Sidhu now dreams of wine women and a princely existence in foreign lands. Thanks to the devious translator a conman by the name Chopstick (Ranvir Shorey),little  does he know that he is being taken to the promised land to rid the Chinese village of the vicious smuggler Hojo (Gordo Liu)! So Sidhu blissfully sets forth to China with Chopsticks who instigates dreams of a delicious future and forgets to reveal the perlis which await him. Along the way he meets Sakhi (Deepika Padukone),Ms Tele Shoppers Media (MS TSM) who has embarked on a journey to pay homage to the land of her birth and her dead father and twin. Initially Sidhu through a series of lucky coincidences manages to sidestep being beaten by Hojo’s men but finally Hojo catches up with him as the country buffoon the he really is. Sidhu has the fire of revenge in his belly and finds that one man who will make him a Kung fu expert and set the village free. Armed with his Sifu (master), faith in himself and the love of the fair Sakhi Sidhu sets fourth to conquer all. 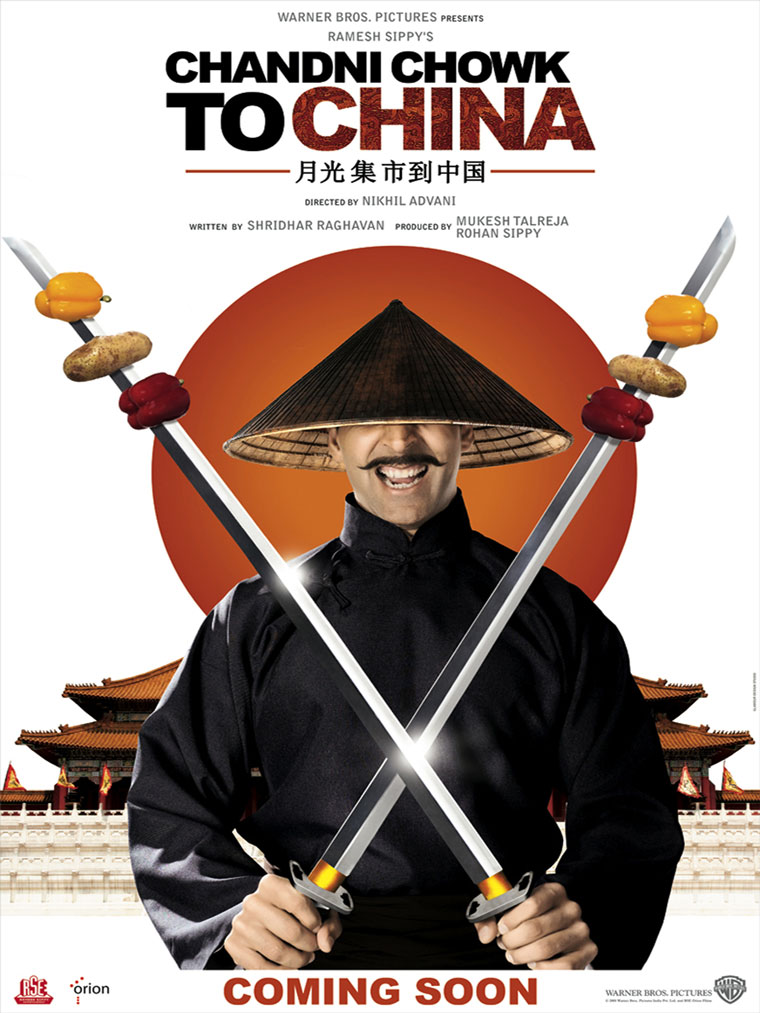 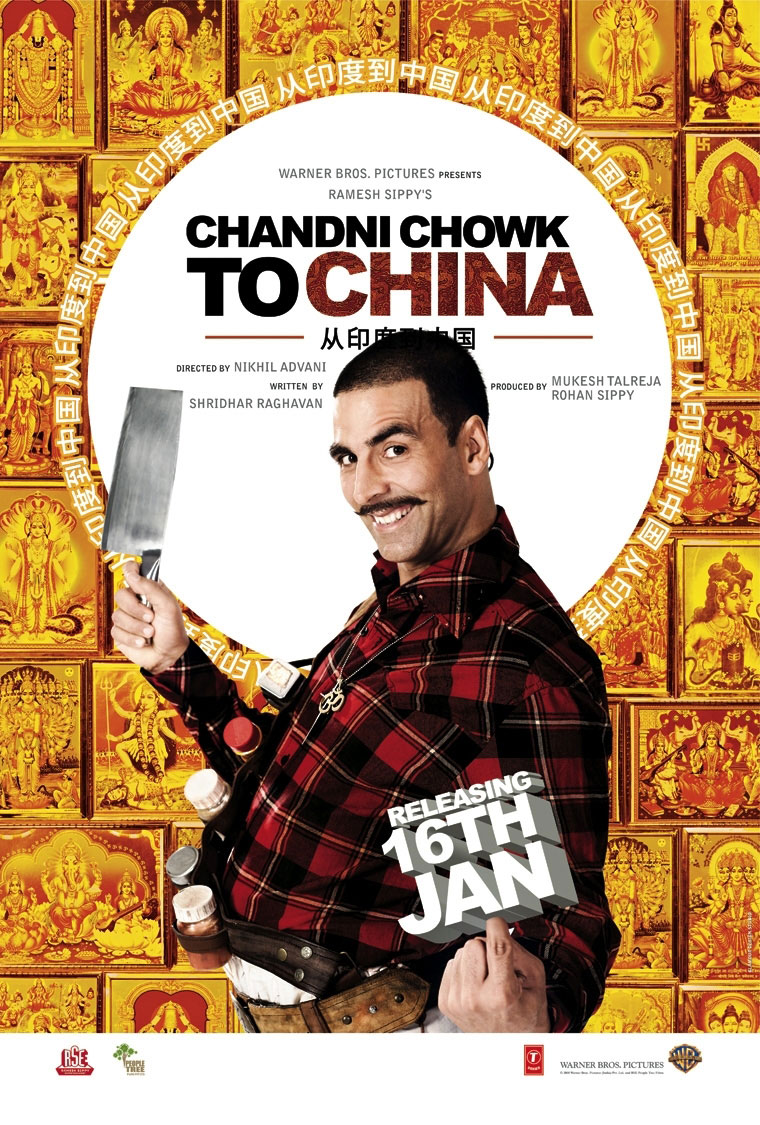 Premiere Of Chandni Chowk To China