David Billa is a Telugu - movie directed by . Starring . 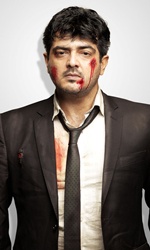 `David Billa` - watch it only for Ajith
Tamil superstar Ajith`s Telugu film "David Billa" has been released amidst huge expectations, given the success of his previous release "Mangatha".

"David Billa" should have ideally been a neat entertainer, but unfortunately it falls flat on the face as it has plenty of style, but very little in the form of content.

Ajith is the main attraction of the film alright, but director Chakri Tholeti seems to have just concentrated on projecting him with lot of build ups and punchy dialogues.

The dialogues may appeal to his fans initially, but gradully viewers will start wondering as to why the director made the producer spend so much for the visual appeal of the film, and didn`t concentrate on the story as much.

Though the director has taken the essence of the story from Al Pacino`s "Scarface", "David Billa" does not have the elements to make it a good action and emotional entertainer. Many sequences do not carry any credibility at all and logic goes for a toss.

Tholeti`s screenplay especially lacks credibility. Since the pace of the film slackens many a times, the audience can get bored in many sequences which seem to have been stretched. The plus point of the film is Ajith`s intensive performance and style, coupled with some amazing camera work of Rajashekhar. The art director has also done a great job.

The story follows a Sri Lankan refugee named David Billa, who takes shelter in Rameshwaram. Though he always fights injustice against the defenceless, he is made to take up jobs on behalf of a smuggler called Abbasi. Slowly, he raises his status in the underworld because of his dynamic and courageous actions. Meanwhile, he is also in love wih Abbasi`s niece Jasmine, while there is another girl who has an eye on him.

Later, David Billa comes into contact with a Europe-based arms dealer named Dimitri, and he breaks his alliance with Abbasi. There is a confrontation between David Billa and his underworld mentor Abbasi. David Billa builds up his own empire. How this results in Billa killing the arms dealer forms the rest of the story.

Unfortunately, Ajith`s strong performance cannot salvage the film. He looks handsome, stylish, sophisticated and also wicked. Some of the dialogues also relate his struggle in the film industry to reach the top. Sudhanshu Pandey regales the viewers with his natural performance, while Vidyut Jamwal is impressive and stylish.

The two heroines have nothing much to do other than sizzling in dance numbers and a few sequences. The romantic sequences look horrible in the film. Yuvan Shankar Raja`s music is not impressive, but Rajashekhar`s camera work is brilliant and visuals of the film stand out.

The art direction is good, but the film`s editing could have been a notch better.

"David Billa" would be an interesting film only if you are an ardent fan of Ajith. Otherwise it is an average film with a weak script spoiling the show.