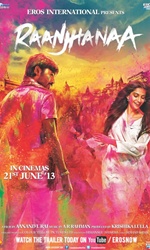 This enormously-enriching film about the pain of love has four heroes: Dhanush, Sonam Kapoor, A.R. Rahman`s music and the city of Varanasi. Not necessarily in that order. But then `orderly conduct` is hardly a given in a film about raging unrequited love.

He loves her to death. Cross his heart and hope to die. And it`s their wedding day. But they`re not getting married to one another. As he returns exhausted from messing up her marriage to another man, the slumbering band-baaja wallahs at his own wedding hasten awake and begin playing a wedding song wearily.

Raanjhanaa tells us it`s not so cool to fall in love. Unless you`re ready to slither on the ground for love, if the need arises.

Ever wondered why we FALL and not rise in love? Just looking at this unforgettable dazzling and non-derivative take on unrequited love set amidst the bustling river-bank politics of Varanasi, we know all over again that love can kill your spirit, soul, self esteem and finally, your physical presence as well.

Angry, aggressive, passionate, temperamental, moody and quite simply majestic, Raanjhanaa is an opulent, epic, seductive, raging and rippling ode to love. The script, by Himanshu Sharma, journeys from the loverboy Kundan`s childhood when he first sees his object of adoration doing her namaaz, and follows him to adulthood, much in the same way as he follows Zoya around.

In seductive spirals of song-filled rhapsody, we see Kundan pursuing his lady-love through the robust gallis and mohallahs of Varanasi. It`s a beautifully charted journey, much less foul-mouthed and belligerent than Habib Faisal`s Ishaqzaade and far more mature and relevant than Ayan Mukerji`s Yeh Jawaani Hai Deewani. It is also made vastly enjoyable by the director`s confident and unhurried control over his lover`s uncontrollable passion. It`s as though Rai knows that the heart is more prone to betrayal than redemption.

The film celebrates the pain of heartbrokenness. She slaps him? That`s fine. He loves her all the more for it. She turns his proposal down? That`s okay. He`ll do it again...and ... again. It`s the protagonist`s single-mindedness that navigates this enchanting love story through a series of circumstances that make Kundan look as brazen as they make destiny look cruel.

Throughout, Kundan`s self-destructive odyssey into the heart`s darkest regions, we are made privy into his agony and ecstacy. We know exactly how his heart beats. Maybe partly because it beats to the sound of A.R. Rahman`s evocative songs. We see Zoya just the way Kundan does: tall, creamy-complexioned, warm, seductive and unattainable.

Dhanush, as the worshipping loverboy, lets his face become the map of his heart. So transparent are his feelings for the girl that every kind word or gesture from her brings a response of teary gratitude in his eyes.

This is not love as we see it in today`s day and age. It`s the kind of adoration that Radha had for Krishna. In many ways, Raanjhanaa is a gender-reversed take on the Radha-Krishna myth that takes the adoring heroine-worshipping Varanasi boy through some exceptional unacceptable circumstances.

Towards the second movement of his extraordinarily well-crafted screenplay, Rai takes Kundan`s destiny to the University of Delhi campus. Bringing campus politics into a film about compulsive love may not seem like the easiest of marriages to implement. It is to Rai`s credit that he doesn`t lose hold of his characters` collective and individual destiny even while moving out of their home turf.

The characters dither, stray, falter and lose focus. The narrative never does. There is scarcely a single false note in this love liaison.

Hats off to Rai`s actors for getting it right. Every performer, including a bit-player like Rahul Shankliya whom the forlorn hero encounters at the river ghat, seems to have come into the picture knowing not only his or her own lines, but everyone else`s as well.

There is an air of unrehearsed preparedness in the way the actors pitch their characters. Dhanush`s performance would go down in cinematic history as one of the most consistent and compelling portrayals of single-minded ardour.

As for Sonam Kapoor, she is a complete revelation! In a born-again performance she sparkles and shines creating a kind of sunshine-girl who is so taken up with herself that she doesn`t get the chance to see what affect she has on the other until it`s too late.

Raanjhanaa is a very simply-told story of a love so intense, durable and destructive, that it hurts. The inner turbulence, tumult and tensions of the central alliance evolves from the vibrancy of Varanasi, from each fluent note of Rahman`s music, and from every pore of director Anand L. Rai`s transparent honest passionate treatment of that much-misunderstood emotion called love.

Looking back on this deeply-satisfying film, I search for flaws. And I come up with one. Would anyone every want to fall in love with a girl so selfish that she allows the man who worships her to be destroyed right in front of her eyes? Is love, then, only about giving and not expecting anything in return?

If Rai`s remarkable love tale seems so richly sublime and vibrant it`s partly because Sonam and Dhanush have submerged themselves into their characters until we see only their love... rather, his love.

Now we know why we fall, and never rise in love! 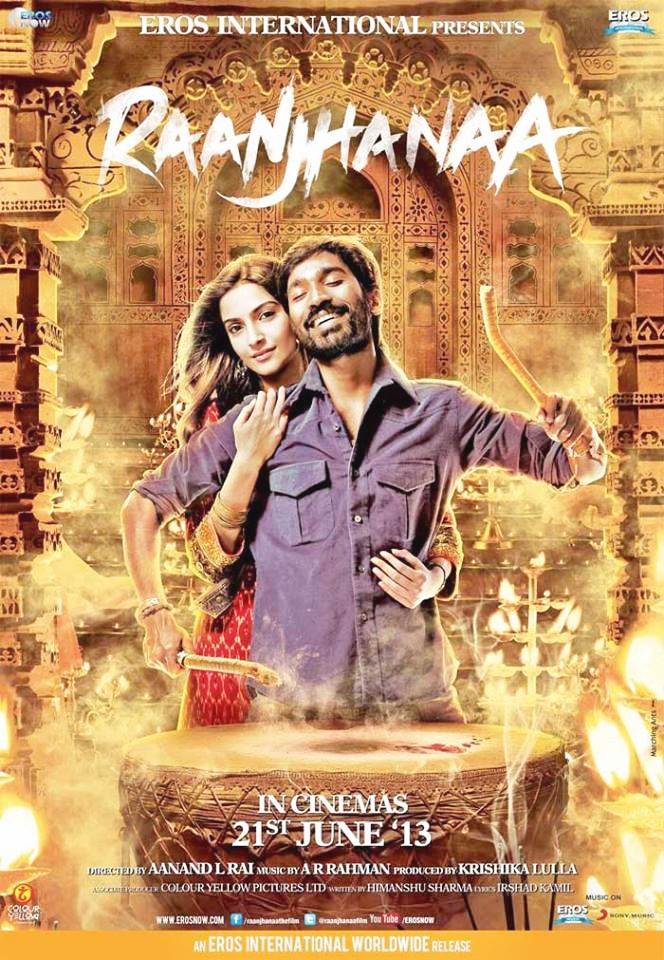 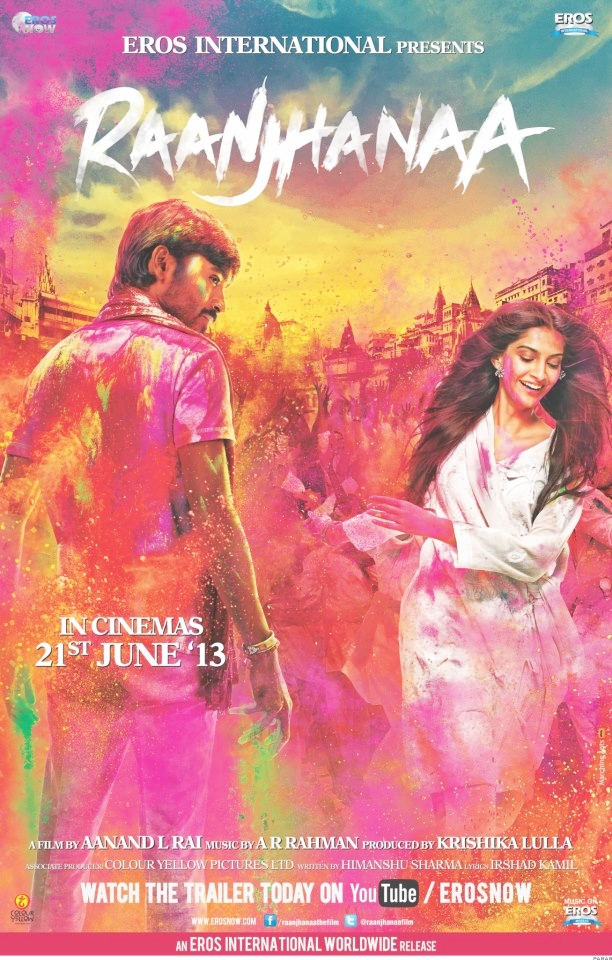 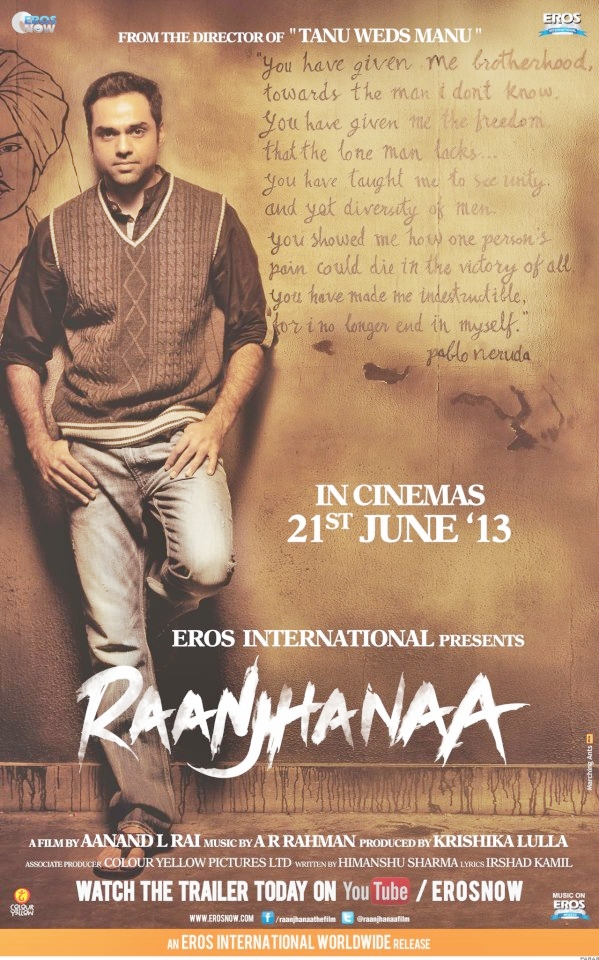 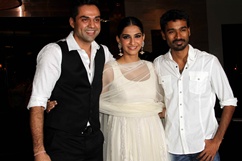