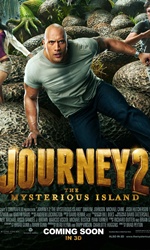 "Journey 2 - Mysterious Island", a sequel to the 2008 film "Journey to the Centre of the Earth", isn`t much more than a series of fantasy-park attractions in 3D.

It`s an adventure to a delightful location with the story leading you to parts unknown. The place is so remote that it has been hidden for centuries, claiming the lost city Atlantis… and, when found, is almost impossible to escape.

The adventure begins when Sean (Josh Hutcherson) a rebellious teen and scientific explorer believes that he has picked up a coded message in a radio signal, which is sent to him by his grandfather, explorer Alexander (Michael Caine).

With the help of his new stepfather Hank (Dwayne Johnson) an ex-Navy man, Sean decodes the message which, according to him, is the co-ordinates for Verne`s Mysterious Island, which also happens to be Robert Louis Stevenson`s Treasure Island and Lilliput in Gulliver`s Travels.

Restless to reach his destination, Sean is hell-bent to make his journey alone. Hank is fun, kind, supportive of his stepson`s enthusiasm for adventure. So, after an opportune obligatory tête-à-tête with Sean`s mom (Kristin Davis) about bonding with her son, Hank is off for the ride as well.

They land on Palau, nearest destination to the mysterious Island`s alleged co-ordinates. Unfortunately no one is willing to ferry them to their destination.

It`s only when they bump into a local opportunist tour-guide Gabato (Luiz Guzman) who is willing to take them across the formidable journey for a princely amount, do they embark upon it.

Gabato is accompanied by his pretty daughter Kailani (Vanessa Hudgens), clearly the love interest for Sean.

The first hurdle in this, so far so good, quest is when the helicopter is hit by a hurricane. The aircraft crashes on the island, which turns out to be a lush tropical wonder, full of enormous insects, miniature elephants, giant lizards, Gold Mountain and a blazing volcano.

They soon find Alexander (Caine), who`s enjoying himself hugely dressed as a hunter and taking on the `Richard Attenborough in Jurassic Park` type role.

The film is witlessly enjoyable, mostly, thanks to the affable presence of Dwanye Johnson, who has a brilliant screen presence. Fortunately, he`s on screen for the bulk of the film. The parts without Dwanye lack energy.

However, the characters and the story are competent. Hutcherson, who was in "The Journey to the Centre of the Earth", "The Polar Express", "Zathura" and "Firehouse Dog", among others, is turning into a shrewd, effective young actor. The rest of the cast is left with little more than stock reactions and exposition.

Visually, the prequel to this film broke ground as the first narrative feature to employ the fusion System, a sophisticated digital 3D camera rig developed by James Cameron and cinematographer Vince Pace, and subsequently used on "Avatar".

Not surprisingly, the "Journey 2" filmmakers returned to the Cameron Pace Group for state-of-the-art strategies and equipment to capture the depth and scope Peyton wanted to achieve in a range of real-world environments.

The far-fetched fantasy is loaded with perils that can be dismissed off as ridiculous - but is fun, and kids will love it.

In this follow-up to the 2008 worldwide hit “Journey to the Center of the Earth,” the new 3D family adventure “Journey 2: The Mysterious Island” begins when young Sean Anderson (Josh Hutcherson, reprising his role from the first film) receives a coded distress signal from a mysterious island where no island should exist. It’s a place of strange life forms, mountains of gold, deadly volcanoes, and more than one astonishing secret.

Unable to stop him from going, Sean’s new stepfather, Hank (Dwayne Johnson), joins the quest. Together with a helicopter pilot (Luis Guzman) and his beautiful, strong-willed daughter (Vanessa Hudgens), they set out to find the island, rescue its lone inhabitant and escape before seismic shockwaves force the island under the sea and bury its treasures forever.

“Journey 2: The Mysterious Island” is a New Line Cinema presentation, a Walden Media and Contrafilm production and will be distributed by Warner Bros. Pictures, a Warner Bros. Entertainment Company. 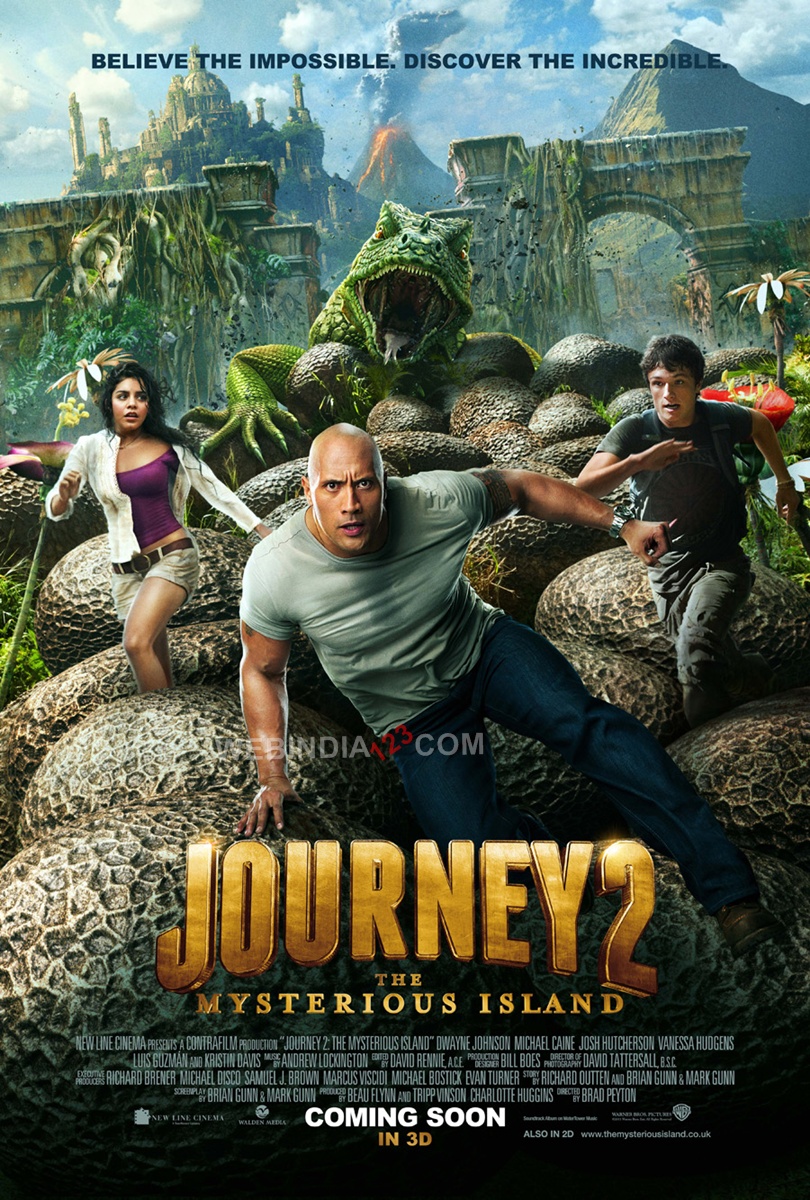