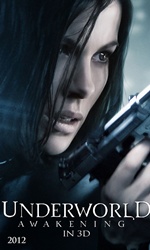 The "Underworld" franchise has never been about great cinema. This unselfconscious series has been about a credible story backed by good special effects riding on the fighting skills of a latex-wearing lead femme fatale.

Though seemingly this isn`t such a hard deal to maintain, the series had indeed been lurching on the edge, ready for a nosedive. "Underworld: Awakening" skews the balance in its favour, delivering a good action packed special effects ride that does not seem like a waste of money on stupid special effects.

The discovery of vampires and Lycans in their midst lead humans to hunt them down. Serene (Kate Beckinsale) and her Lycan-hybrid lover try to escape but are separated by a human attack. Serene wakes up 12 years later to find a changed world where the vampires and Lycans are almost extinct. Or so everyone thinks, till she discovers two secrets: one about their species and the other about herself.

There is nothing original in either the story or its progression. Yet, directors Måns Mårlind and Bjorn Stein know their craft enough to ensure that the film does not go over the top or be self-consciously pretentious. In evenly playing out the story, they give the film a credibility and emotion that seem to have been missing in the last installment.

As it had been from the start, this too is Kate Beckinsale`s film. Cinematic sister of the latex-wearing Carrie Anne Moss in "Matrix", Kate looks as young as she did in the first part nine years ago and as ferociously vulnerable.

This part does a few interesting departures for the fans of the series. Humans, who had so far been excluded from the fight, feature in this. In that sense, the film brings the war between vampires and werewolves into the foreground from the underground with humans playing both enemies and allies to them.

The writers were also obviously referring to their series while naming the film "Awakening". From going into the history of the past in the last two films, it finally comes back to the present, thus rebooting the franchise with some interesting friends and foes thrown into the picture. There will obviously a fifth part in 2015. After all we have had one "Underworld" film every three years.

For action and gore junkies, there`s enough of both to salivate them. A decent Hollywood action film is expected to have typically conceptualized shots that make the audience hold their breath and which often involves the protagonist making creative use of his/her guns. This one has a spectacular one with a lift and other well choreographed scenes.

Throw into that a little bit of motherly emotion for good measure, and the film manages to be just the ride dope for the lovers of irreverent, unselfconscious and often pointless action films.

Underworld 4: Awakening brings a stunning new dimension to the epic battle between Vampires and Lycans, as the first film in the franchise to shoot in 3D.

Kate Beckinsale, star of the first two films, returns in her lead role as the vampire warrioress Selene, who escapes imprisonment to find herself in a world where humans have discovered the existence of both Vampire and Lycan clans, and are conducting an all-out war to eradicate both immortal species.