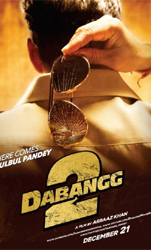 `Dabangg 2`: Salman all the way, holes in plot but fun watch (IANS Hindi Film Review)
Rating: ***
For those who thought Chulbul Pandey in Abinav Kashyap`s "Dabangg" was wacky and fun only because Salman Khan played him, here is more spoof-proof in the sequel of how Salman adopts, embraces and assimilates the characters he plays until one can`t tell the star apart from the character.

This is not to say Salman is a method actor. God forbid! He`s just the opposite. Chulbul Pandey, if ever such a khaki-clad law-enforcer ever, would want to be as chirpy and obnoxious as Chulbul Pandey.

The fights which begin, end and bolster the plot, are done with that irrepressible mix of guffaws and grunts that Salman patented in Prabhu Deva`s "Wanted". Indeed it wouldn`t be wrong to say that Prabhu Deva was the father of Chulbul Pandey, in a manner of speaking.

Here of course in "Dabangg 2" Vinod Khanna is back as Chulbul`s father. The scenes between Salman and his screen-dad are written with a delicious mix of irreverence and affection. There is a hilarious encounter on the rooftop of their Kanpur home where son asks his sleepy, annoyed father about the deceased mother (Dimple Kapadia, a mere photo on the wall in the sequel).

And then Salman leaves in a huff saying, "Mom was right. You`re no fun to sleep with. I am better off sleeping with my wife."

Ahem. Save the blushes for a rainy day. Salman`s Chulbul gives us no time get bothered with niceties. Chulbul simply sweeps us along into a tidal wave of wackily written and executed action sequences undercut by a sharp sense of self-deprecating humour.

The storytelling is breathless. The characters can`t really keep pace with the breakneck storytelling. They are underveloped and largely kept in the shadows to accentuate the hero`s larger-than-life (though blessedly never larger-than-laughs) persona.

Sonakshi Sinha, of course, enjoys playing the seductress in the shadows. In film after film, she plays the dutiful beloved soul-mate to the macho-hero. And really, her sartorial styling and the designer sarees and backless blouses in a film that pays a lot of attention to mofussil modes is way-way-way over the top. It`s hard to see her expressions beyond the eyeshadows.

That reminds me...Sonakshi shares the shadows with Arbaaz Khan who as Chulbul Pandey`s brother is delightful daft and goofy.

The villains have a coherent voice (never mind their livid screaming) and more space to develop as characters. The plot goes into spasms of explanation as to why one of the villains Niktin Dheer needed to take off his shirt in the climax .Really, Salman`s shirtless act needs no accompaniment.

Prakash Raj does his usual snarling sneering arch-villain act, no surprises here. Deepak Dobriyal who gets to die in a rather gruesome way in the irate Chulbul`s hands, is sharp and cutting in his brief role. Some of Salman`s subordinates in the police station are also engaging.

But make no mistake. This film belongs to Chulbul alias Salman from the first frame to the last. Salman goes through the motions without any punctuation except a string of exclamations. While the other characters remain dutifully tenuous, Chulbul`s comic-book valour is highlighted unapologetically.

Though the plot is written in half-hearted measures leaving many episodes including the climax looking incomplete, the film is loads of lowbrow fun with some peppy songs by Sajid-Wajid which are filmed with an earthy gusto. Aseem Mishra`s camera looks at life in "Kanpur" through wide-eyed lenses that stare unabashedly at the characters`s quirks.

And now for the ek crore ka sawaal. Does Kareena Kapoor`s item song "Fevicol" match up to Malaika Arora`s "Munni badnaam" in the first "Dabangg"?

Redundant question. It`s like asking, does "Dabangg 2" measure up to "Dabangg"?

Looking forward to pair up with Aditya for first time: Sonakshi

Actress Sonakshi Sinha, who is a part of Dharma Productions' epic drama "Kalank", says she is super excited to work with an ensemble cast and is looking forward to team up with Aditya Roy Kapur for the first time.Sonakshi spoke about this at a fashion event organised by veteran actress and activist Shabana Azmi's Mijwan Welfare Society.Read More

`Dabangg 2` - double dose of action, comedy, Chulbul Pandey
After breaking box-office records with Dabangg, actor Salman Khan is ready to entertain audiences in his popular avatar of Chulbul Pandey in Dabangg 2, which releases this Friday.

Dabangg was set in a village and had the rustic, rural flavour of Uttar Pradesh. The story this time around will shift to a posh metropolitan city.

The sequel will see Chulbul Pandey to be transferred to a city, where he will mingle with the elite, but will retain his simplistic flavour and values. Dabangg having been a blockbuster, the buzz around the sequel is high too.

The original movie was directed by Abhinav Kashyap, but he opted out of the sequel due to some issues, following which Salman`s brother and producer Arbaaz Khan jumped in as the director.

Made under the banner of Arbaaz Khan Productions, Dabangg 2 has been written by Dilip Shukla. This will be Arbaaz`s first film as a director.

The film will see Salman and Sonakshi Sinha again reprising their roles of Chulbul Pandey and Rajjo, while Vinod Khanna will feature as Prajapati Pandey, and Arbaaz as Makhanchan Pandey.

Dabangg proved to a turning point of actor Sonu Sood`s career, who played the main antagonist Chhedi Singh. Initially he was a part of the sequel too, but had to opt out because of date issues.

Now, Prakash Raj has been roped in to play the antagonist. Made at a budget of approximately Rs.50 crore, the film is likely to release in over 3,000 screens.

Since the release of Dabangg in 2010, the movie and Chulbul Pandey have become a brand. Whether the sequel will be able to create the same magic as Dabangg remains to be seen.

After the release of Shah Rukh Khan`s Jab Tak Hai Jaan and Aamir Khan`s Talaash, both of which earned big bucks at the box-office, it would be interesting to see how Dabangg 2 does at the box-office and which Khan takes the top slot. 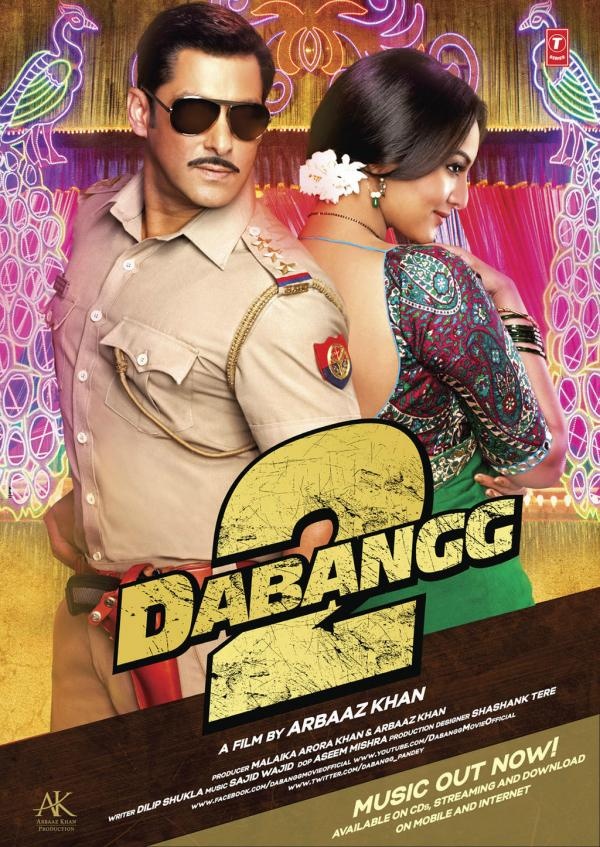 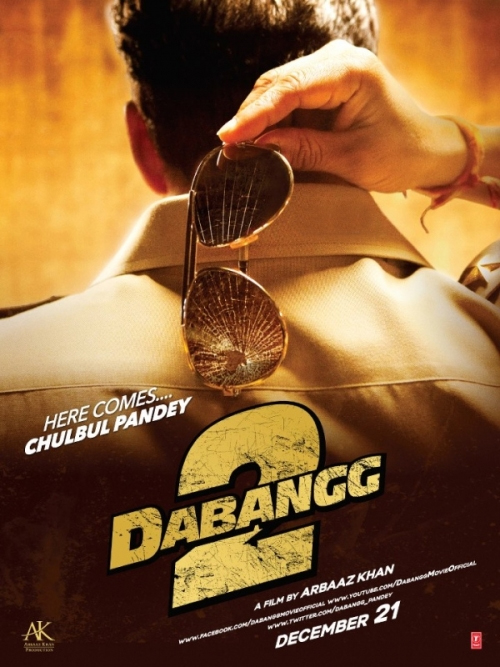