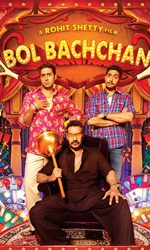 `Bol Bachchan`: A modern day `Golmaal`
Rating:***
Like that cute little boy who holds his father`s face in both his hands to get attention, "Bol Bachchan" just doesn`t let go. Its relentless quest for a rolicking time is infectious. The comic confusions are put forward with a giggly gusto. You can see the team had a great time shooting this subverted version of a 1979 comic classic.

Hrishikesh Mukherjee would be unable to recognize this version of his comedy `Golmaal` on which Bol Bachchan is based. Hell, he might have even sued for subversion of his creative property. But then, he always loved the Bachchan family. And there are the two Bachchans in the film - Abhishek Bachchan and his likeable comic partner Krushna Abhishek. No, make that 3. At the very start the senior-most Bachchan, the Big B himself, makes a gracious song-and-dance appearance where the director Rohit Shetty lets us know he loves the Bachchans.

In one way or another.

The film casts Abhishek Bachchan in a double role of Abbas and his doppelganger double Abhishek Bachchan. Yes, that`s the name given to Abhishek`s character when he comes face-to-face with the village head-honcho Ajay Devgn, a kind of benign mukhia who is goofy and rather dumb, so dumb that he actually believes the on-screen Abhishek Bachchan`s cock-and-bull story about how his parents named him as such because they were big fans of Amitabh and Jaya Bachchan.

Devgn`s character, a not-so-gentlemix of a pehelwaan and Anil Kapoor in Virasat is as far removed from its origins, namely Utpal Dutt in Golmaal, as Archana Puransingh is from Dina Pathak. The former steps into the latter`s role with the kind of defiant toss of her head and bosom that makes the transition more of a humorous takeoff than a homage.

Indeed, some of the funniest scenes in this fair comic romp into Hrishida`s backyard feature the excellent Ms Puransingh.

The tongue-in-cheek tribute to the original film is quite often so cocky it makes you wince. Rohit Shetty has stripped away the gentle amiable wit of Hrishikesh Mukherjee and replaced it with a raw and ripe humour that takes swipes at anything that comes in the way of the satire.

Yes, the original featuring Amol Palekar and Utpal Dutt plays on television in a sequence. And there`s a play being staged in Rohit Shetty`s imaginary village where two actors impersonating Dutt and Palekar enact the original film.

That is as close as we get to Hrishikesh Mukherjee in this punk-parody of the original comedy.

Valiantly, the dramatic tension in the comedy is based on a communal divide. The hero Abbas has to invent a Hindu phantom-double to avoid a religious backlash. Unusually for a comedy, the filmkeeps making sharp stinging remarks on the communal issue without causing offence. In one specially audacious sequence, the film`s writer targets two minority communities, the Muslims and gays, in the same range of vision without tripping over.

The cute Prachi Desai playing Devgn`s kid-sister remarks that some of our biggest names like Abdul Kalaam and Shah Rukh khan are "like that". Devgn has the other minority community in mind.

Bol Bachchan dares to carry its sense of fun to an extreme of playfulness without toppling over into crassness. It takes on the scared cows without putting its feet in the cow poo. The elderly are often a brunt of ridicule in the plot. But again, no offence meant. Asrani`s rapport with his screen-son is truly funny.

However what doesn`t work is the enforced action sequences where just to simulate a climax in the trademark Rohit Shetty style, cars leap into the air, buses crash into windows - Shetty`s stunts are becoming predictable in their execution. A change is needed there.

What works are the performances. Ajay Devgn as the endearing bully is in top form. His mongrelized use of the English language is the cheekiest subversion of the original film`s content. In Hrishida`s Golmaal Utpal Dutt spoke only the purest form of Hindi.

Abhishek Bachchan pulls off the double role with the right blend of the subtle and the saucy. This is his second film after Dostana where he has to impersonate homosexuality.

A special word for Abhishek Krushna and Archana Puransingh who provide plenty of chuckles with their comic timing.

Hrishida may not approve. But this is Golmaal without the innocence of those times.And that`s the way we like it.

Rohit Shetty has a gift for all movie buffs in Gujarat. The director has decided to release his new film "Bol Bachchan" Read More

After churning out films like Golmaal, Golmaal Returns, Golmaal 3 and Singham, once again Shetty`s is ready to take audience on another laughter ride with Bol Bachchan.

Said to be inspired by 1979 movie Gol Maal, the film has Abhishek Bachchan, Asin Thottumkal, and Prachi Desai in the female leads.

The story revolves around Abbas Ali (Abhishek), a resident of Karol Bagh, New Delhi. He stays there with his sister Sania (Asin) and they are legally fighting to get the title of their ancestral property.

But the odds turn against them and they lose the case. Their well-wisher, Shastri Chacha, advises and convinces them to migrate to his village Ranakpur and assures Abbas that he will get him a job at his owner`s place. The owner being none other than the powerful Prithviraj Raghuvanshi (Ajay).

In Ranakpur, while saving a child trapped inside a temple, Abbas breaks open the lock of an ancestral temple. It upsets the villagers and they are up in arm against Abbas, but Prithviraj arrives at the scene and bails Abbas out.

On being asked his name, Abbas`s friend comes out with a fake name because he knew that the villagers will be outraged if they will find out that the lock of the temple has been broken by a Muslim guy.

From here starts a series of cover-ups, goof-ups and comic situations where to cover one lie, Abbas pads it up with a bigger lie that he has a twin brother with no moustache. This leads to topsy-turvy journey of a single person acting as two different entities.

Bol Bachchan has been co-produced by Dhillin Mehta and Ajay.

Shetty has roped in megastar Amitabh Bachchan for promotional song Bol Bol Bachchan. In the song, the 69-year-old recreated the iconic song My name is Anthony Gonsalves and pops out of a life-sized egg. 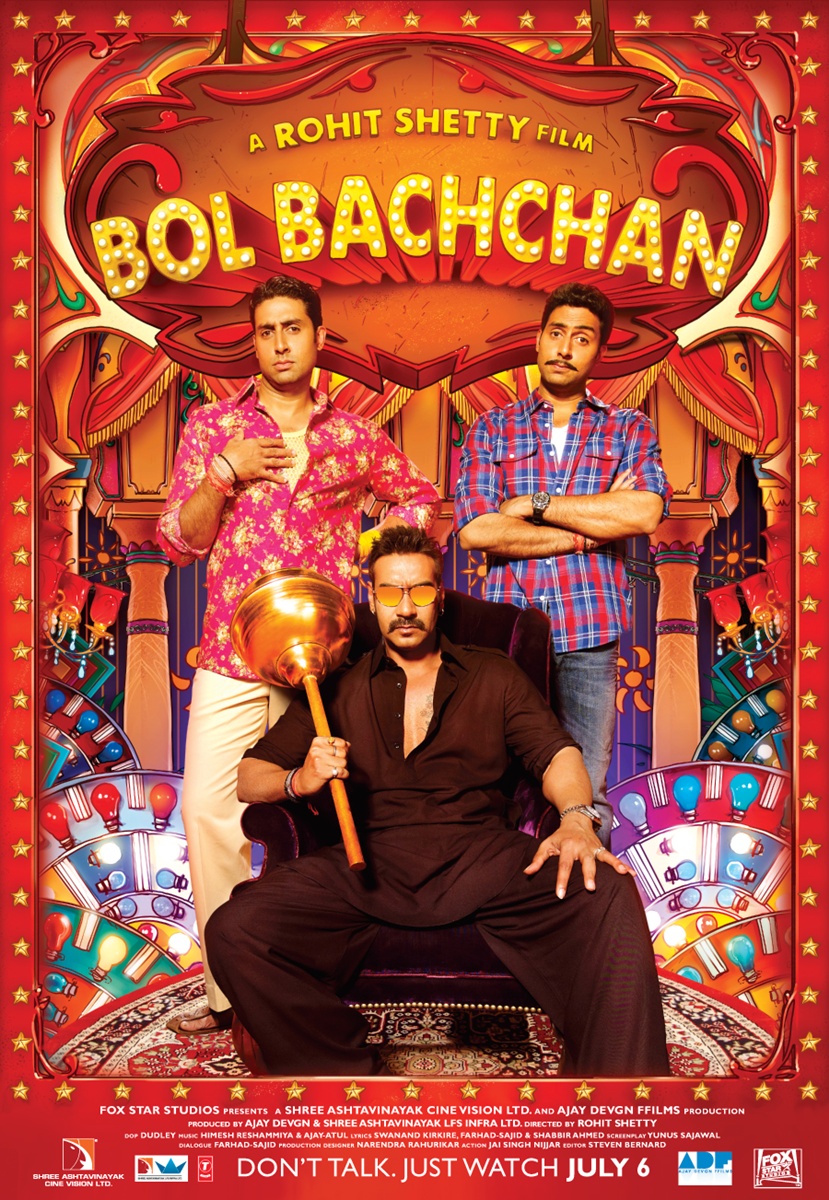