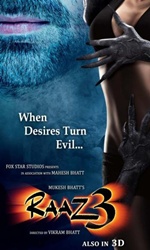 `Raaz 3`: Bipasha shines in brutal supernatural take on Bollywood rat race
Rating: **
"Voodoo karle saajna..." If your career starts to slip up, have no fear. Consult God. If He lets you down, consult his nearest rival Satan. Shake hands and even bed the devil, and you have an ally to work on your enemy.

So now we know why actresses in Bollywood can`t get along. They are too busy sticking needles into one another`s careers to focus on their own. Shanaya (Bipasha Basu), we are told at the outset without wasting time, is a top-notch actress on the downslide. Instead of drowning her defeat in drinks, she decides to smother her nearest rival, the upcoming Sanjana`s (Esha Gupta) career, using her director-lover Aditya as a bait.

Writer Shagufta Rafique`s screenplay is more of scream-play. The two actresses between them scream their lovely lungs out, as hands pop out of graves to lunge at shapely throats. Mirrors are broken and used to pierce satanic casualties and to track down ghouls which appear only in mirror images.

Just where Vikram Bhatt gets all this information on the dark side of the moon, we will never know. Presiding over the ritual of unmitigated evil is Satan in human form living in a slum that would give Danny Boyle an orgasm, wearing a suit that has seen better days, sitting on a forlorn chair parked in ankle-deep water.

This, I guess, is apocalypse in the other world. Hell, director Vikram Bhatt even throws in two seances where our hero - weak vulnerable ineffectual and uncertain as only Emraan Hashmi can be, enters to save Sanjana who is under a satanic attack.

The Bhatts have never shied away from demonstrating onscreen brutality in its bloodiest form. "Raaz 3" is their biggest blood fest from the Bhatts after "Murder 2", which I feel, redefined screen violence.

"Raaz 3" is also not for the squeamish. The death of a poor house-help who dares to suggest to Sanjana that she might be a victim of "jadu-tona" (black magic), is particularly gruesome.

Now we know why kitchen staff is so hard to find in Mumbai.

Vikram Bhatt infuses a lot of shock value through the saturated soundtrack which keeps pounding and pelting sound effects, hammering the horror of a young vulnerable actress being destroyed by voodoo until we are left trembling and cowering in our seats. If the anti-satanic rituals don`t wake up the dead, the soundtrack surely will.

Esha Gupta as Sanjana, is sincere and stark. She uses some of the horrific moments to soften the blow of the over-blown, like the one in the hotel washroom where she`s attacked by scores of insects (a grotesque parody of Alfred Hitchcock`s "The Birds") or that tender touching scene in the hospital where she says the best line of the film to Aditya (Hashmi) who has just confessed he has been helping Shanaya in her black magic and offers to redeem his soul by saving Sanjana.

In truth "Raaz 2" has its moments where horror melts into a kind of full-blown mythological tale. Aditya rescuing Sanjana from death is a clever gender-reversal of the Savitri-Sayavan mythology where the wife won back her husband from Yama, the God of death.

Here Satan in a soggy suit is played Manish Chaudhari who tries to make sense of the mumbo jumbo. It must have taken a demoniacal degree of self-control for the actor not to giggle when his characters challenges Shanaya with, "Tumhein mere saath wohi karna hoga jo ek aurat ek aadmi ke saath karti hai. Hai himmat?"

Get it? Shanaya quickly does.

It`s Bipasha who holds together the feverish proceedings. She delivers a full-bodied gutsy performance. Pulling out all stops she plays the devil-woman out to kill competition by hook or by crook, pouring her soul into her character, making Shanaya`s desperation her own.It is a brave and fearless performance conveying the trauma of a floundering career.

Every actress fears the competition would overtake her. Some go to the plastic surgeon. Others consult the nearest black magician.

Either way the outcome is inevitable. Evil can`t win. At least not in our movies, Vikram Bhatt springs a spook spree that offers viewers the irresistible bait of horror and sex. You wait for the horror to get sexy. Instead the sex gets progressively horrific. No Satan or its messenger can be as scary as Emraan Hashmi chewing on his two heroines` lips as though he has just relinquished vegetarianism.

RAAZ 3 is the next offering from Fox Star Studios and Vishesh Film. Directed by Vikram Bhatt, its the 3rd movie from the most successful horror franchise of India cinema `RAAZ`. Staring Emraan Hashmi, Bipasha Basu and Esha Gupta. The movie is set against the backdrop of the glitz, lights, glamour and back-stabbing cruelty of the entertainment world; a fading movie diva Shanaya (Bipasha Basu) turns to Black Magic to thwart an upstart young starlet Sanjana (Esha Gupta) on her way to usurp the position Shanaya once held. Sanjana ruthlessly turns against the girl, using her lover Aditya (Emraan Hashmi), a man who owes her his career, as a pawn. Things go awry when Aditya falls in love with the Sanjana despite himself and avows to protect her against the evil that is consuming all of them. World Wide Release on 7th September 2012. 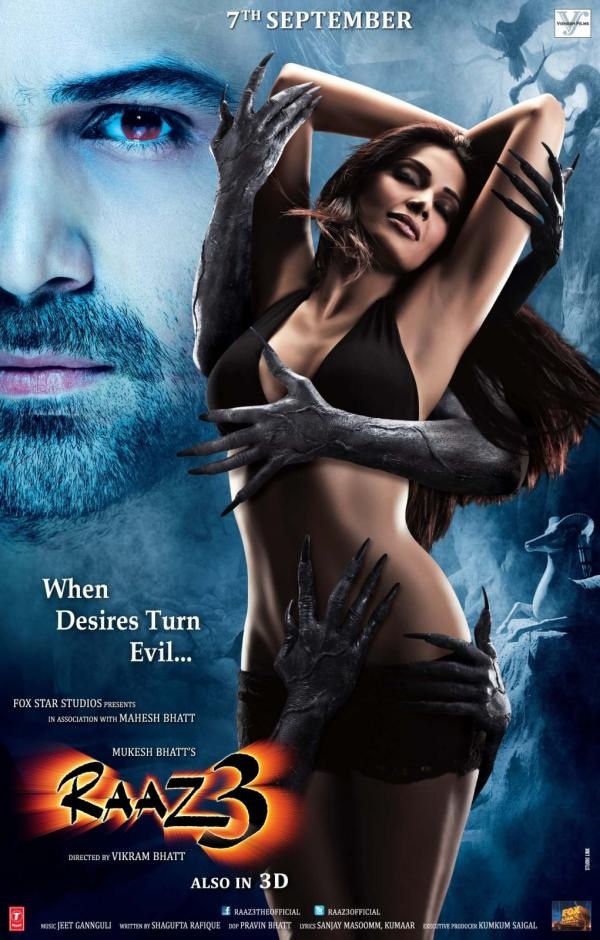