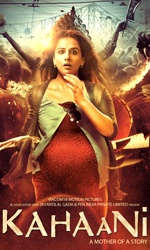 This is a great time to be a movie buff. Within a week of Paan Singh Tomar, which should incontestably win Irrfan Khan the National Award for best actor, comes Kahaani in which Vidya Balan is so flawlessly resplendent that one suspects the next year`s National Award too is already reserved for her. Dirty deeds forgotten.

Playing Vidya Bagchi, a non-resident Indian (NRI) who lands in Kolkata heavily pregnant and immeasurably distressed by the disappearance of her husband, Vidya Balan doesn`t hit a single false note in the entire graph of her character`s fascinating journey.

Kahaani is not an ordinary thrill-a-minute film about a search for a missing person. It`s a lot more. Bringing a virgin vitality to the suspense drama, the film strikes a captivating balance between realism in art and the art of courting realism, without losing the entertainment quotient.

From the moment Vidya lands in Kolkata, the colour, vibrancy, bustle and jostle that are peculiar to Kolkata assail your senses. It`s a claustrophobic yet liberating world of intrigue and deception. A pungent flavour of anxiety and stress qualify the narration from frame one.

Sujoy Ghosh, whose earlier films gave us no clue of the ingenuity that he displays here with such ostensible casualness, cuts the footage with razor sharp economy, leaving no sign of the surgery involved in leaving behind scenes and putting together a tale that pays homage to Hitchcock even while it tilts its topi to the detective films of Satyajit Ray.

The complexities of metropolitan life emerge in a kind of bridled flurry. Within a few minutes of Vidya`s landing in Kolkata we know her search for her missing husband is not going to be a cake-walk. Yes, we will see this spirited woman`s pursuit of the truth to the end.

Ghosh crafts a tale of devious dynamics that do not make a song and dance of their cloak-and-dagger intentions. The narrative doesn`t whip up a lather of anxieties. Stock devices of the suspense genre are here thrown meaningfully into the Hooghly. The relevance and resonance of Vidya`s journey into the dark unrevealed bowel of India`s secret service emerge in illuminating details created in Vidya`s character which add up finally to a jigsaw where not a single piece is out of place.

The end-game, shot in an exquisite eruption of Durga Puja`s compelling colours, is so unexpected, it is bound to leave even the most diehard cynics with a sense of satiated suspense.

Indeed so clever is the writing and so stunning yet convincing the denouement that one was persuaded into wondering whether Sujoy Ghosh filched the material from some unidentifiable source.

While it would be criminal to give away any of the plot details it would be in the scope of permissible praise to say the writing is clearly not meant to strew red herrings in our way. As we go back to the film, at the end we see every detail, every twist and turn in the plot was meant to be a coherent pointer to the complete picture.

Ghosh`s masterful story-telling leaves no room to doubt the existence of a rather unforgiving God who charts a seemingly cruel destiny for the unsuspecting individual.

Vidya`s portrayal of grace under pressure is so measured and skilled, one at times wonders if she was actually watching herself perform from a distance to make sure she didn`t take her character`s distress into the kingdom of melodrama.

Vidya Balan has splendid support from actors who merge into the Kolkatan conundrum with the seamless inevitability of people who accept extraordinary circumstances as part of life`s ordinary patterns.

Impressive in his own right is Parambrata Chattopadhyay as Vidya`s pillar of support from within an establishment that insists on throwing her off the track.

Parambrata plays his gentle character with such tender affection that you begin to believe goodness is not an extinct commodity.

In one of Vidya`s best sequences where she quietly tells him to keep his menacing advice to himself, Nawazuddin steps back to let the lady have her moment of glory, unhampered.

Vidya Balan takes centrestage with great skill and restrained pride. Her laughter of joy when she bonds with the chai-wallah kid (Ritobroto Mukherjee) and her final breakdown sequence bring her close to the cathartic emotions that Shabana Azmi displays.

Vidya displays a rare understanding of her character`s exacerbated emotional and physical state. Luckily for her, her co-actors display no outward or inward signs of insecurity in playing roles that are designed to be supremely supportive.

Veteran Bengali actors unknown to Bollywood, such as Saswata Mukherjee as a hired assassin and Kharaj Mukherjee as a kindly podgy cop, fill up the edges of the comprehensive lucid portrait of a woman with a mission, without crowding the canvas.

Kahaani is one of those rare films that can easily lay claim to being a game-changer. And yet the narrative makes no claims. The destiny of the protagonist is charted in a breathless sweep of urgently persuasive episodes that tumble out as though God wrote Vidya Bagchi`s screenplay.

Enthralling, absorbing and engaging the narrative never resorts to italicized emotions to get our attention. We are hooked unconditionally from scene one. We surrender to Vidya`s journey. She gives us no choice.

Every medium is an opportunity to grow: Sujoy Ghosh

National Award winning filmmaker Sujoy Ghosh, who is exploring different mediums -- big screen, television and short films -- says he enjoys the process of working in multiple platforms as he feels it helps in his creative growth.Ghosh has made a series of three telefilms titled "Teen Pehliyan" for TV channel Star Plus.Read More

Working with Big B is a bad habit, says Sujoy Ghosh

National award-winning filmmaker Sujoy Ghosh says he is planning to soon work with megastar Amitabh Bachchan.After his last feature film "Kahaani 2: Durga Rani Singh" asked about his upcoming project, Ghosh told IANS: "Well, I am writing a script and hopefully I will be working with Amit Ji (Amitabh Bachchan). I think Amitabh Bachchan is a bad habit, if you work with him once, you want to work again and again…I have so many fond memories of him. I wish to work with him soon."Read More

Vidya Bagchi arrives in Kolkata from London to find her missing husband. Seven months pregnant and alone in a festive city, she begins a relentless search for her husband. With nothing to rely on except fragments from her memories about him, all clues seem to reach a dead end when everyone tries to convince Vidya that her husband does not exist. She slowly realises that nothing is what it seems. In a city soaked in lies, Vidya is determined to unravel the truth about her husband - for herself and her unborn child - even at the cost of her own life.