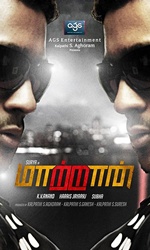 `Mattrraan` - Suriya shines, film disappoints
Rating: **1/2
Indian filmmakers please wake up from your slumber and realize audiences are no longer willing to sit through films with a cliched plot and extended running time.

"Mattrraan" only promises the potential of actor Suriya, but fails to arouse interest due to its stretched second half and lacklustre narration.

When 45 winning Olympians of Ukraine die mysteriously in a plane crash in 1992, several years later, two Indians, the son of a huge milk powder manufacturing company and his girlfriend uncover information with regard to the plane crash. The couple, with the help of a Ukrainian scientist, should bring to light the truth that could possibly save some millions of lives in India.

All films of K.V. Anand to date have addressed some social problem. Likewise, in this film too, he addresses one of the raging problems our country faces today and barely seems to be doing anything about it.

There`s absolutely no need to weave a story with conjoined twins, but writer Subha deliberately writes one to make the audience connect emotionally with the film. The relationship between the twins is poignant, funny and most importantly full of energy.

The idea to inspire the audience by including the social responsibility story is worthwhile. However, what doesn`t impress is the hackneyed storytelling approach of the film. "Mattrraan" has as an interesting and humorous first half, but unfortunately the second half is a long and boring affair.

Suriya is brilliant and carries his two roles that are poles apart with ease and conviction. Sachin Khedekar as a zealous genetic engineer fits the character perfectly and proves he was worth the opportunity offered. Thankfully, there are no comedians or separate comedy track, but that doesn`t stop Anand to impress with few laughable moments. The inclusion of comedians would`ve added few more minutes to the running time and that could`ve definitely annoyed one and all.

Anand, who is known to make socially responsible films, should realize that the time has come to innovate. Nobody will stop a filmmaker from addressing a social issue, but he or she would be appreciated if it`s presented in a story that`s engaging.

Technically, the film was way ahead of the league, especially in the visual effects department headed by Srinivas Mohan, who made the conjoined twins look as real as possible. Editing by Anthony is satisfying, while music by Harris with visuals sounds better.

"Maattrraan" is a one time watch, strictly for Suriya.