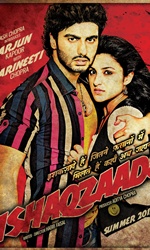 What does one do when love strikes during times of war? And make no mistake. Elections time in a small dusty town of Uttar Pradesh is akin to war. Guns are fired randomly at enemies, real or imagined. Enemies fall to the ground. Morals lie crushed under heels. And finer feelings are buried under a rubble of trouble.

Into this town, here named Almora, enters love on silent feet. Well, maybe not so silent. Ishaqzaade is a very noisy film. The hero Parma (debutant Arjun Kapoor) is an uncouth animal, whose disgusting habits include kidnapping the town`s nautch girl from a rival`s party to dance at his grandfather`s wedding. Later, his moral temperature dips to an all-time low when he takes loathsome revenge on the girl he loves to hate.

As the Muslim girl Zoya, Parineeti Chopra fills the screen with a tempestuous charm. Naturally spontaneous and vivacious, she reminds you of the early Jaya Bhaduri. Her character is a sharp-shooter with a tongue to match. And when she gets brutally compromised by Parma, she reacts like a wild cat raging against the promised full-cream milk that curdled when she was not looking.

Habib Faisal, who made the mellow, mild-mannered middle-class comedy Do Dooni Chaar about a college professor`s dream of buying a car, here shows a completely unexpected side to his cinematic vision. The landscape he paints in Almora is so volatile and violent, you pray for atonement for these characters.

The lovers don`t exchange chaste glances and furtive kisses. They embrace passionately and smooch each other`s lips off. And when they make love, it seems they are waging war on the world. Full-blooded, voluptuous and eminently earthy, Ishaqzaade is a pickled, aromatic roller-coaster ride through the badlands where blazing guns mean families are at one another`s throats.

The first-half of the narration builds up to an engrossing case for Parma to inflict his uncouth and aggressive malevolence on Zoya. The confrontation scenes between the two, written with the right amount of zing and sting, are first-rate. Remarkably the adversaries-turned-lovers keep drawing attention to each other`s religion without mincing words. The two religions are almost thrown at one another as taunts. Riot or wrong, who can tell?

What Faisal wants to say, and we would be better off if we pay heed, is -- it is imperative to address the Hindi-Muslim divide headlong, or else blood would continue to be spilt each time two people from different communities `dare` to love each other.

Don`t even think of it. An Indo-Pak war will break out, the Muslim girl warns the Hindu boy. And then proceeds to break the self-imposed rule with a rush of rebellion and passion that seems to replicate the flow of adrenaline in the virile script.

Ishaqzaade is written in blood, dipped in passion, and shot in vivid colours of life, strife and other bitter embers of the communal fire. The director constantly attempts to bring alive the cluttered milieu of a lawless north Indian town. Faisal succeeds to a remarkable degree.

His characters speak an easily recognisable language from Uttar Pradesh`s heartland where even daughters are taught to fire a gun before they learn the alphabet. The supporting characters don`t fake it even for a second.

Many scenes convey warmth and empathy without a jot of self-consciousness. The characters are all played by unknown local UP actors who are born to the milieu. The director builds a believable arc of love and revenge. His lovers are so well-conceived on paper, it would have taken two truly idiotic actors to ruin their characters.

Luckily, Parineeti and Arjun are anything but incapable actors. They imbue the violent ambience with their own peculiar chemistry.

The bloodshed never stops, and the action is relentless. Hemant Chaturvedi`s cinematography creates a world that is real and at the same time, highly cinematic.

There are many reasons why Ishaqzaade is a remarkable film. It enters the killing fields of Uttar Pradesh. It chases down our two protagonists and then watches them get into a crisis with no end. In the end, we are looking at two young vibrant people whom we love because they love one another irrespective of the differences.

This is not a film which offers a pretty love story with gentle love songs. Even the music (by Amit Trivedi) sounds like a war cry. As for Parineeti and Arjun, never mind the destiny that lies in store for their characters in this film. They are here to stay.

Rising from the ashes of hooliganism and small town clan wars, comes the love story of a passion ignited by hatred.

Of two people. Born to hate. Destined to love.

A story… about two fiery bloods played by Arjun Kapoor and Parineeti Chopra, and their fight for power and supremacy.

A story about love brewing in a small town burning with hatred.

Follow the story of the ishaqzaade`s as their turbulent journey unfolds in the often unrealistic and daunting political confines of rural India. 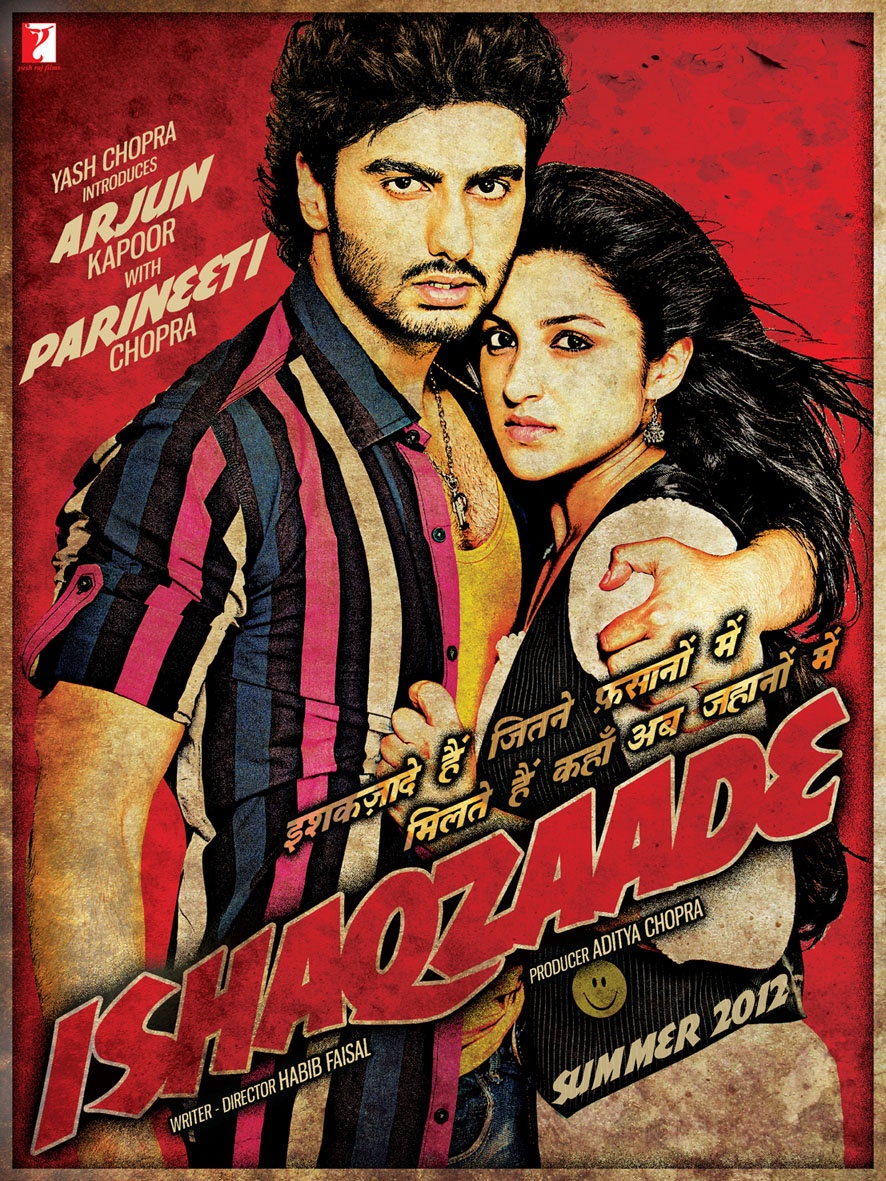 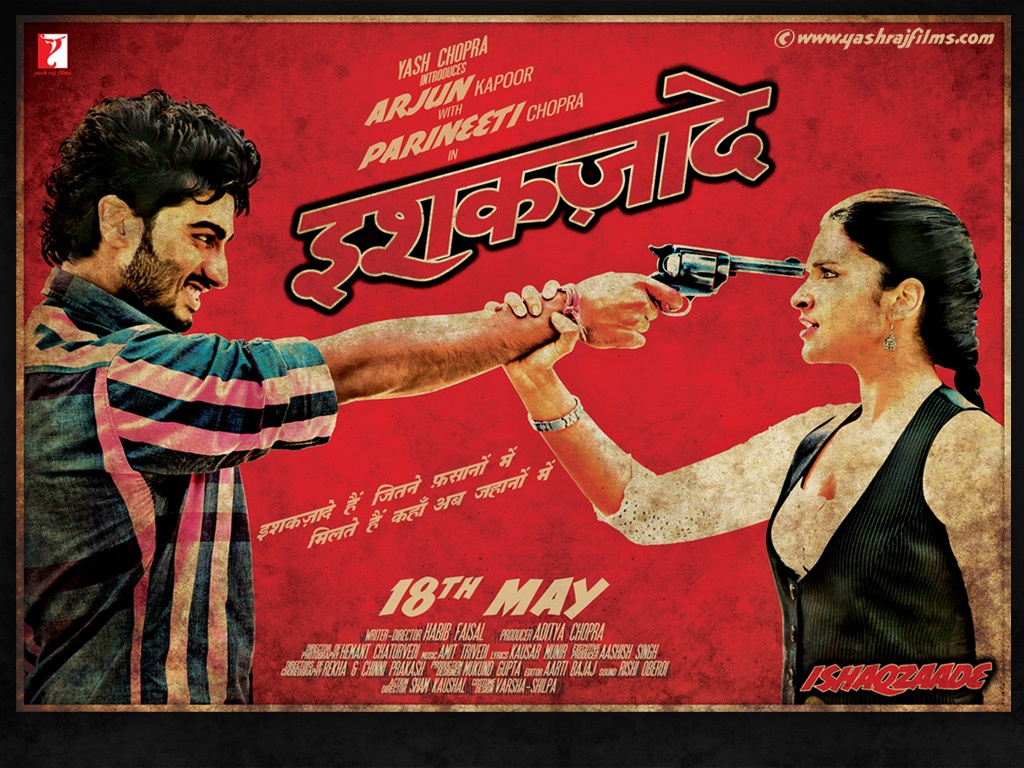